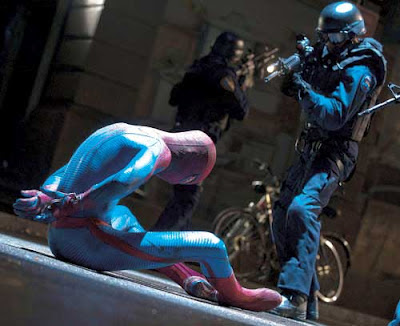 Both of this week's big releases, The Amazing Spider-Man and Ted have already been in cinemas for a few days. Advanced screenings because of the school holidays, I imagine. Katy Perry: Part of Me is also out. And Once Upon A Time In Anatolia is getting a Sydney release, I believe.

The Amazing Spider-Man - The story of Peter Parker (Garfield), an outcast high schooler who was abandoned by his parents as a boy, leaving him to be raised by his Uncle Ben (Sheen) and Aunt May (Field). Like most teenagers, Peter is trying to figure out who he is and how he got to be the person he is today. As Peter discovers a mysterious briefcase that belonged to his father, he begins a quest to understand his parents' disappearance - leading him directly to Oscorp and the lab of Dr. Curt Connors (Ifans), his father's former partner. As Spider-Man is set on a collision course with Connors' alter-ego, The Lizard, Peter will make life-altering choices to use his powers and shape his destiny to become a hero. There is a cloud of pessimism surrounding this film because of the brief period of time between this and Raimi's Spiderman franchise, but most early reports have been moderately positive with praise coming for the casting and Webb's building of the comic-book atmosphere.

Ted - Family Guy creator Seth MacFarlane brings his boundary-pushing brand of humor to the big screen for the first time as writer, director and voice star of Ted. In the live action/CG-animated comedy, he tells the story of John Bennett (Mark Wahlberg), a grown man who must deal with the cherished teddy bear who came to life as the result of a childhood wish...and has refused to leave his side ever since. Ted might take a few people by surprise. I enjoyed it because it was consistently very funny, and has some heart. One of the funniest films of the year so far, I'd say.

Once Upon A Time In Anatolia - In the dead of night, a group of men - including a police commissioner, a prosecutor, a doctor and a murder suspect - drive through the tenebrous Anatolian countryside, the serpentine roads and rolling hills lit only by the headlights of their cars. They are searching for a corpse, the victim of a brutal murder. The suspect, who claims he was drunk, can't remember where he buried the body. As the night draws on, details about the murder emerge and the investigators' own secrets and hypocrisies come to light. In the Anatolian steppes, nothing is what it seems; and when the body is found, the real questions begin.


Weekly Recommendation: Yet to see Spider-Man, but can recommend Ted if you're a fan of MacFarlane's brand of humour in Family Guy, or enjoyed the live action/CGI animated blend of a film like Paul. Anatolia is...interesting...and long. Hard film to recommend, but you won't forget it if you endure it.
Posted by Andy Buckle at 11:10 AM