July has been a bit of a slow month on the site so far. I will try and be a bit more productive this week. I have still been watching plenty of films, but I have been working quite a bit and contributing reviews of Wrinkles and Cousinhood to the Official Spanish Film Festival Blog. You Instead hits cinemas this week, and I caught up with The Amazing Spider-Man. Thanks to everyone who commented on my spontaneous review of Clint Eastwood's Play Misty For Me. I'll make the time to reply to them all shortly.

During the week I picked up the 11 Disk Powell and Pressburger Collection, which is an exciting purchase including their notable works Black Narcissus, The Red Shoes and A Matter of Life & Death. 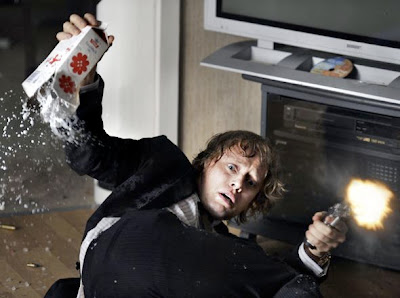 For Australian residents I also have a giveaway running. Headhunters is a film that shouldn't be missed, and you have the chance to win a copy of the film on DVD. All you have to do is email your name, address, and the name of the author whose novel the film is based on to andrew.buckle22@gmail.com.

Here are this week's links:

Sam reviews Heartbeats as part of her Canadian Film Month.

Alex asks his readers: What Oscar-worthy performances have you seen this year? His long-anticipated trailer for his short film Earrings, is also online.

Sati shares her thoughts on Notes On A Scandal, a film I am yet to see.

Stevee lists 5 Movie-Themed Biopics she would like to see.

Be sure to check out the new features, Put This On a T-Shirt and Five Star Films at Graffiti With Punctuation.

I have been listening to a bunch of Mark Kermode recently, and Tyler, in timely fashion, looks at the very best of the Good Doctor.

Hope everyone has a great week.
Posted by Andy Buckle at 1:24 PM