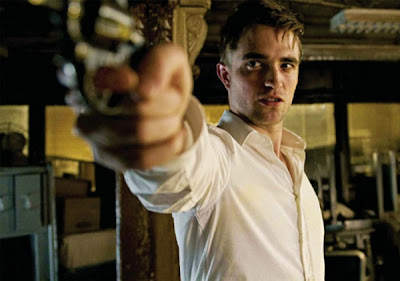 Cosmopolis - New York City, not-too-distant-future: Eric Packer, a 28 year-old finance golden boy dreaming of living in a civilization ahead of this one, watches a dark shadow cast over the firmament of the Wall Street galaxy, of which he is the uncontested king. As he is chauffeured across midtown Manhattan to get a haircut at his father's old barber, his anxious eyes are glued to the yuan's exchange rate: it is mounting against all expectations, destroying Eric's bet against it. Eric Packer is losing his empire with every tick of the clock. Meanwhile, an eruption of wild activity unfolds in the city's streets. Petrified as the threats of the real world infringe upon his cloud of virtual convictions, his paranoia intensifies during the course of his 24-hour cross-town odyssey. Packer starts to piece together clues that lead him to a most terrifying secret: his imminent assassination.

Abraham Lincoln: Vampire Hunter - Visionary filmmakers Tim Burton and Timur Bekmambetov reinvent the time-honored genre and present the terrifying creatures of the night as they were meant to be experienced -- as fierce, visceral, intense and bloodthristy. Abraham Lincoln: Vampire Hunter brings to the screen the secret life of our nation's favorite president...as history's greatest hunter of the undead.

Jackpot - At a plastic Christmas tree factory in Norway, three dangerous ex-cons and their supervisor win 1.7 million kroner on the pools. As trust and friendship quickly dissolve, guns are loaded, knives are sharpened, and the division of the money begins. Like Headhunters it is based on a popular Jo Nesbo novel. If it is as good as that film it should be worth a look.

Step Up Revolution - The next installment in the worldwide smash Step Up franchise, which sets the dancing against the vibrant backdrop of Miami. Emily (Kathryn McCormick) arrives in Miami with aspirations of becoming a professional dancer and soon falls in love with Sean (Ryan Guzman), a young man who leads a dance crew in elaborate, cutting-edge flash mobs, called "The Mob." When a wealthy businessman threatens to develop The Mob's historic neighborhood and displace thousands of people, Emily must band together with Sean and The Mob to turn their performance art into protest art, and risk losing their dreams to fight for a greater cause.

Weekly Recommendation: ??? I have only seen Cosmopolis (tonight) and certainly can't recommend it. What a disappointment. I have heard that Abe Lincoln is a bit of fun, though it will likely be as dumb as the premise suggests. Good luck finding a session not in 3D. Jackpot has potential, but I'm not sure where it is screening. Beauty did not impress a few friends of mine who saw it at the Sydney Film Festival, so I have little interest in seeing that. Margaret, The Dark Knight Rises, Magic Mike and A Royal Affair (having recently surpassed $1 million at the box office it is now screening in more locations) are the best films currently in cinemas.
Posted by Andy Buckle at 10:34 PM