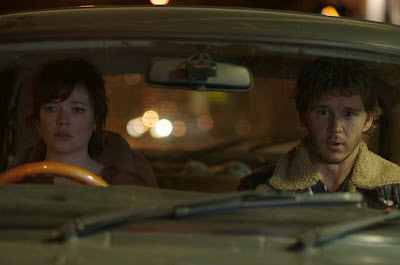 We're in the middle of blockbuster season and separating The Amazing Spider-Man and The Dark Knight Rises is a bit of a quiet week. Scheduled for release are a pair of Australian films, comedy/drama Not Suitable For Children, and the new film from Rolf de Heer, The King is Dead. Also released is Hysteria, a British film starring Hugh Dancy and Maggie Gyllenhaal about the invention of the vibrator, and You Instead, a rock-n-roll romance shot in doco-style on location at Scotland's T in the Park music festival. Kenneth Lonergan's Margaret is now getting a Sydney release this week (and screening exclusively at Palace Verona). It has been playing at the Nova in Melbourne since June 14, and I included it amongst that week's releases (here).

Not Suitable For Children -  A modern romantic drama with a twist. For once it is the guy's biological clock ticking. The directorial debut of Peter Templeman tells an upbeat story of Jonah, played by Ryan Kwanten, who embarks on a crazy caper to find the ‘one’, after discovering that he’ll be infertile in a month. Also stars Sarah Snook and Ryan Corr. Light and consistently amusing Australian comedy/drama with a star turn from Sarah Snook.

You Instead - A free-wheeling rock 'n' roll love story set against the raucous magnificence and unforgettable sounds of Scotland's leading music Festival. The film features Luke Treadaway as strutting indie star Adam, one half of globally successful duo The Make. Arriving at T in the Park for his gig, during an impromptu backstage fight, Adam finds himself accidentally handcuffed to punky girl-band The Dirty Pink's leader Morello (Natalia Tena) and they have to spend the following 24 hours inseparably joined together. During the long night's journey into day, frustration eventually gives way to grudging acceptance of the situation and this leads to them eventually falling for each other.

The King is Dead - Max, a science teacher, and Therese, a tax accountant find their dream home in a quiet, leafy neighbourhood. Unsuspecting, they buy and move in, finding a nice family on one side and, well, an "interesting" one on the other. But interesting soon becomes loud, loud soon becomes intolerable and intolerable becomes violent. With the police are powerless to do anything, and the community lawyer suggesting they ear plugs, Max and Therese are forced to try and solve the problem of the neighbour from hell themselves...and end up with a corpse on their hands. But even that's not the worst of it, because the corpse from hell has friends and even worse, enemies. Directed by Rolf De Heer (The Tracker, Ten Canoes).

Weekly Recommendation: I thoroughly enjoyed You Instead and Not Suitable For Children. Though both have their issues, I think they are worth a look. Hysteria and The King is Dead I am yet to see. Then there's the great unknown: Margaret. Many reviews coming out of Melbourne last month, and from the U.S last year, claim that it is fantastic. I'll be watching it.
Posted by Andy Buckle at 9:33 AM