Anvil! The Story of Anvil tells the extraordinarily moving and rousing story of Canadian heavy metal band, Anvil; a band who were once huge and whom many called "the demi-gods of Canadian metal" and believed would "turn the metal world upside down" and ended up falling into obscurity and all-but forgotten. It is puzzling that they never became as famous as those they inspired.

The story focuses on the two founding members, singer and guitarist Steve “Lips” Kudlow and drummer Robb Reiner, who are still friends through thick and thin and now into their 50’s. There is footage of Lips celebrating his 50th birthday by doing what he loves most; entertaining his fans. This wild pair has never broken a childhood pact, to remain metal brothers forever. They still rock out like its 1985, somewhat oblivious to the changing music trends, and have never given up on the dream of the next big break. 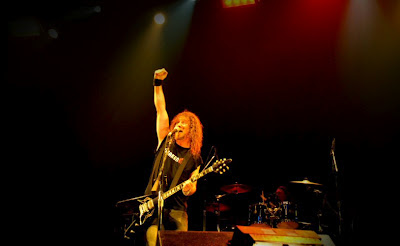 Director and one time roadie of the band, Sacha Gervasi, sensitively explores the daily lives of these men - they balance their day jobs (Steve drives trucks for Children's Choice Catering and Robb is in construction and has a passion for art as nearly as strong as his one for music) with night gigs at their local sports bar – as well as their musical ambition and talents, their consistently tumultuous friendship and Steve's never-surrendered desire to give the world something else for the band to be remembered by.
Having never achieved the greatness that was expected of them as a headlining band during the mid-80’s, Anvil have now relegated to local shows for their tiny group of dedicated fans. But, with setback after setback, they seem to have one final chance to return to their past glory. Will their courage pay off? Balancing humour and pathos, the crazy situations they find themselves in when touring Europe and recording their 13th album are unforgettable and Anvil tells a story so bizarre it feels like it can't be true.


Anvil opens with footage from the Super Rock Festival in Japan in 1984. Anvil are rocking out. Hard. Lips was notorious for playing guitar with a dildo and Reiner had the reputation for being one of the best heavy metal drummers in the business. Anvil’s fellow acts; Scorpions, Whitesnake and Bon Jovi, all went on to sell millions of records. But Anvil did not. This show, and the release of Metal on Metal, their highly acclaimed second album, proved influential to an entire generation of heavy metal musicians. There are interviews with several artists, Slash (Guns N Roses), Tom Araya (Slayer) and Lars Ulrich (Metallica), who discuss the influence that Anvil and Metal on Metal had on their careers. 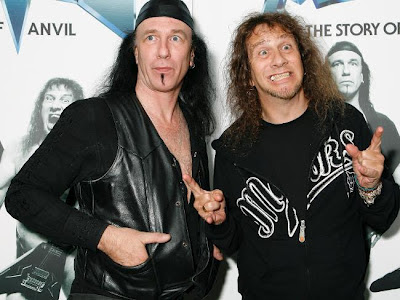 A disastrous European tour, organized and managed by an inexperienced fan and the eventual wife of one of the band members (and their wedding allowed the band to perform in front of the bewildered guests), defines the poor representation that has plagued their careers. They deal with unreliable public transport (even sleeping overnight at a platform awaiting their connection), perform in front of tiny crowds in dingy underground bars, and even get refused pay after arriving at the venue several hours late. This comeback attempt is typical of their struggle. They have the passion and the heart, but they have lost their reputation, have poor management and experience no luck.
Ultimately, after many setbacks and a serious spat between Robb and Steve over creative difference that threatens to break up the band during the recording sessions for This is Thirteen - and we are given privileged insight into their relationship through the accounts of their loved ones - they have a big chance. It could be their last. Their former producer of 'Metal on Metal', Chris Tsangarides, offers his assistance, but the band faces rejection (again) as they try and shop their album around to different record labels. Despite their struggles, there is a presence of optimism throughout, and Gervasi deftly blends the bizarre with the touching and creates a film that is gloriously entertaining and more than sufficiently uplifting. 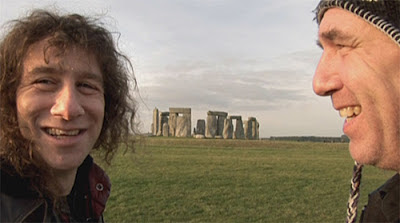 We watch these likeable underdogs, and its hard not to be moved to tears when Steve's older sister Rhonda, who lends him the money to fund the recording, declares that she always wanted him to succeed. When Steve realises his role in upsetting Robb, he is brought to tears trying to convince him to come back and play. These are just regular guys, and the film takes a sensitive look at these men, notorious for their heavy and foreboding music (which scores the film of course) and delving into themes recognisable in every human being; looking back on one's life and considering your fulfilment, the sacrifices made to follow dreams, the importance of friendship and family, and the shallow nature of the entertainment world and what it takes to be respected and admired within.
While it would be a somewhat minor triumph for most bands, Anvil! concludes with a major one for Steve and Robb. Returning to Japan, one of the sites of their mid 80's glory, they are slotted to take the stage at 11.35am. Incredibly, they are met with energetic welcome from thousands of fans. For Anvil this film has been a major triumph, earning the band new fans and more opportunities. As a documentary that took me completely by surprise, it is surely one of the decades finest.
My Rating: ★★★★1/2 (A)
Posted by Andy Buckle at 9:00 AM