Film wise, I have had a great start to the month. After having a nice day out and about with my girlfriend, we watched Xavier Dolan's Heartbeats, the winner of the Sydney Film Festival Competition Prize in 2010 and quite a remarkable achievement from the 21 year-old writer-director-star-editor-costume designer of the film. It is a sexy film with remarkable use of colour and sound and a very sensitive look at sexuality and infatuation. This joins a string of fantastic Canadian films I have seen of late - Cafe De Flore, C.R.A.Z.Y., Monsieur Lazhar, Take This Waltz, Incendies and Anvil! The Story of Anvil. 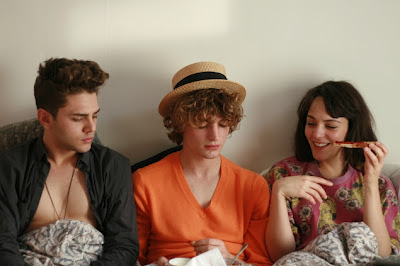 Then we watched Shame. Wow, what an unforgettable experience. It is a film that keeps getting better and better, and is without a doubt one of the very best films released in cinemas this year so far. Every feature of the film is brilliantly executed - the performances from Michael Fassbender and Carey Mulligan, McQueen's wonderful framing and ability to let the scenes play out unbroken, the perfect use of score, the editing and the use of colour. The fact that a film about sex addiction can be so unsexy, yet be not just about 'sex' addiction but the pain experienced from an addiction of any kind, is extraordinary.

With the 15th Spanish Film Festival set to commence on Wednesday, I have been watching and reviewing some of the films to be screening over the course of the festival. Later today, my review of Wrinkles, an animated film with a genuine shot of being the frontrunner in next year's Oscar race, will be available to read on the Official Spanish Film Festival Blog. Later this week, I will also have reviews of Cousinhood and Sleep Tight.

So, on with the links for this week:

Sam @ An Online Universe is honouring Possible Worlds, Sydney's Canadian Film Festival, which runs between August 13 and 19, by hosting a Canadian Film Month. She will be reviewing films that come out of Canada and is also looking for contributors who have something to say about their favourite Canadian film. Keep an eye out, because she will be reviewing Heartbeats during the week, and be sure to stop by and let her know whether you are interested in contributing.

Alex takes a look at the extremely versatile career of John C. Reilly.

Castor reviews Ted at Anomalous Material. I liked Ted. One of the year's funniest films.

Lesya has a really interesting new post: Paris in Genres.

Sebastian of Films From the Supermassive Black Hole has moved on to a shiny new site.

Ruth takes a look at her Top 10 Favourite Pixar Characters.

Scott at Front Room Cinema reviews Killer Joe. So glad he dug it. It is fantastic.

Blake takes a look at The Amazing Spider-Man.

Tyler celebrates the life and work of Krzysztof Kieslowski.

In his Auteur series (#12) Steven looks at the work of Nicolas Winding Refn.

Last but not least, Jessica @ The Velvet Cafe takes a look at the best films 2012 has had to offer so far.
Posted by Andy Buckle at 11:14 AM