Bernie, the latest film from writer-director Richard Linklater (Dazed and Confused, Before Sunrise/Sunset), is a fascinating tale based on events that seem too outrageous to be true. Linklater, through an equal dose of sensitivity and respect and exploitative humour - and this can be realised brilliantly in the film's concluding courtroom sequences - deftly crafts one of the most surprising and effortlessly entertaining black comedies of the year out of a somewhat morbid and shocking case of true crime. 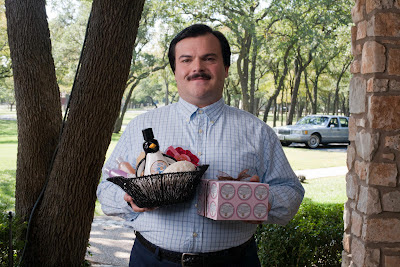 Fuelled by a complex and nuanced performance from Jack Black, career-best work, and hilarious support from an in-form Matthew McConaughey and a tantrum-throwing Shirley MacLaine, the intelligent screenplay by Linklater and Skip Hollandsworth features an obscure blend of cinematic technique (scripted narrative intercut with interviews with residents of Carthage about Tiede, Nugent and the story) and shape-shifting genre, Bernie is a rewarding example of offbeat mockumentary filmmaking.

Bernie is based on a 1998 Texas Monthly magazine article by Hollandsworth, “Midnight in the Garden of East Texas”, which chronicled the 1996 murder of 81-year-old millionaire Marjorie Nugent (McLaine) by her 39-year-old employed close companion, Bernie Tiede (Black). After their friendship - which included lavish overseas vacations together - was believed to have taken a sour turn, Nugent was shot in the back four times with a rifle by Tiede, who confessed to the murder months later after the body had been discovered.

Bernhardt 'Bernie' Tiede was a portly, jovial, polite and seemingly harmless religious man with a beautiful singing voice who begins work as an assistant funeral director after arriving in the tiny Texan town of Carthage from Louisiana. He quickly develops a reputation of being a highly skilled embalmer and a kind and thoughtful (if eccentric) man blessed with many talents. He leads the church choir as well as offering his direction and acting skills in community theatre performances, including an especially memorable rendition of 'Seventy-Six Trombones' from The Music Man. 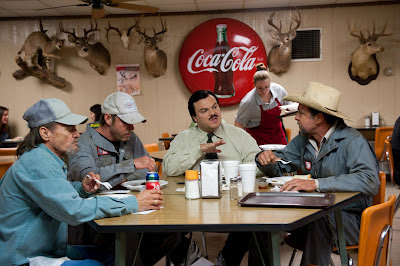 He becomes extremely popular amongst the locals, and known to be the only man able to charm Nugent, a prune-faced and ill-tempered old widow and millionaire who is estranged from her family. Nugent, who takes a liking to Bernie and is amused by his peculiarities, employs him to be her chauffeur, travelling companion and even financial adviser. His initial pleasure soon takes a turn when she begins to suffocate his lifestyle.

Bernie shoots Nugent, and with the body remaining undiscovered, he continues to convince the townsfolk that she is still alive and make excuses for the continuation of large and lavish purchases with Nugent's wealth. Only District Attorney Danny Buck Davidson (McConaughey) suspected that Bernie "had cast a spell over the entire town" and was convinced that an unsavoury individual was hidden beneath the veneer.

This is what Bernie becomes in the end and Linklater does a wonderful job of wrestling between these speculations while remaining respectful to everyone involved. Did Bernie really enjoy Marjorie's company or did he get too used to a life of privilege and culture? Was the murder a spontaneous reaction to Nugent's bullying and abuse, or a premeditated attack to allow him free rein over her funds? The reasons offered in the concluding court room sequences and through the opinionated locals offer up plenty of options and carry a strangely acceptable level of authenticity. We can never be sure, and this is where the film succeeds. It is funny on so many levels, and this makes it somewhat inappropriate, but it is always gentle and endearing and manages to be be simultaneously shocking and entertaining. 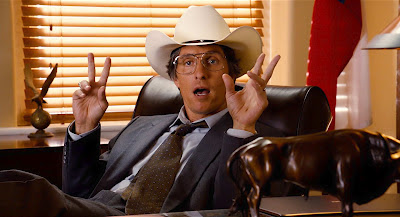 These interviews with the eccentric Carthage residents - scripted responses based on original transcripts delivered by actors assembled by Linklater from nearby towns - are reminisces on the characters that make up the tale and offer their insight into their lives and are very funny. It is never really clear whether they were the actual residents of Carthage or performers, but their listing in the ending credits seems to conclude that they are. I have since been informed otherwise. Some of the minor characters are definitely portrayed by actors, but everyone is so larger than life that it is never obvious. These southerners are always depicted in a savoury light and are simple minded but interesting people who seem to relish telling their story and these sequences gel brilliantly with the more obviously scripted events.
It is impossible to take your eyes off the versatile and pitch-perfect Black (and Linklater makes great use of his vocal skills), whose odd protagonist is personable and likeable, but one endowed with such eccentricities - and many of the interviewees speculate about his sexuality and where this motivation to help everybody stems from - that you also remain a little wary of him. This is a man, a gifted salesman and community angel who takes on his responsibilities very seriously, who continued to spend Marjorie's money for months after her death. There is certainly something quite morbid about that.
MacLaine is both amusing and purposefully aggravating as the cranky old Nugent, while McConaughey almost steals the show. Every sequence involving him is a riot. As the film becomes more of a legal drama in the third act, McConaughey harnesses his abilities to convincingly portray a lawyer (as he has in two of his most acclaimed performances, A Time to Kill and The Lincoln Lawyer), but plays it for laughs. He succeeds, and is excellent again. With fine work in Killer Joe, Magic Mike and now Bernie, the man is on a roll. This is not just a study of the individual, but also of the entire town of Carthage, and following the event the town became a media circus; and Danny Buck, in his attempts to secure a conviction, requested to have the trial relocated. 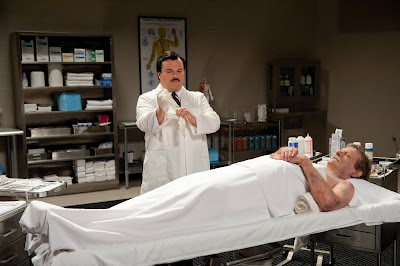 Dislike for the film may understandably come as a result of how one feels about a murder mystery being transformed into a black comedy. Having some understanding of how historically accurate the film is – and the real Danny Buck Davidson has been outspoken claiming it is historically inaccurate because “Nugent’s story is missing” - will also likely result in some displeasure. The film's pacing, and especially the growing tumultuous relationship between Bernie and Marjorie, is affected by the inclusion of the quasi-doco elements and the film's division into chapters. Linklater's creative vision, the film's gentleness and tone of joviality, and the charismatic performances easily overcome any setbacks caused by this imbalance.
Bernie is such a fascinating person; learning about his profession, his generous community involvement, his relationships with Marjorie and the locals and his hobbies and interests, makes for captivating viewing. It is so subtle in its observations. It is unknown how accurate these spoken accounts are, but we are introduced to a character as intriguing as the locals suggest, and Bernie (and Black’s performance) is ultimately the primary reason the film is as memorable as it is.

Bernie is an often-uproarious doco-comedy/drama chronicling a series of events that seem too bizarre to be true. Brimming with wonderful moments (like this), and intelligent direction, Bernie is not far short of a masterwork and one of the year's funniest films.