40 Days at Base Camp is screening as part of Possible Worlds Canadian Film Festival, which runs August 13-19.

Each year thousands of people arrive at base camp, set up at the bottom of the Khumbu glacier, with a common goal; to reach the summit of Mt. Everest, the highest peak in the world. This is done either through a corporately sponsored team or as an individual climber, and these brave men and women can expect to pay up to $100,000 for the experience. 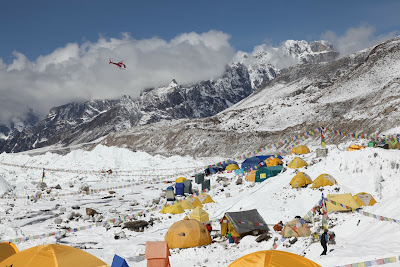 In Dianne Whelan's beautifully photographed, insightful and inspiring documentary, 40 Days At Base Camp, we are given privileged access to this micro culture and introduced to a number of interesting personalities, including a base camp medical expert, a communications officer, a journalist, several very enlightened sherpas and a number of ambitious climbers (experienced and novice alike).

We are informed of the immense planning that goes into ensuring that the climbers are educated and equipped and all the necessary facilities are available for them at base camp. We also learn of some of the climbers' personal motivations, and their different spiritual interpretations of the Himalayas themselves and the thrilling and dangerous endeavour they are undertaking.

We are introduced to three teams in particular; the Columbian, Indian and Canadian teams. One member of the Columbian team is a man who lost his leg in a previous hiking accident and is trying to overcome his disability and achieve the unthinkable. Cut into the breathtaking footage of the Himalayas and the thriving energy of base camp are the intimate personal video footage from some of the climbers. These are courtesy of Arjun, a 16 year-old Indian climber, trying to become the second youngest person in history to summit Mount Everest, and Meagan, an experienced Canadian climber who conquered Everest a few years earlier, and this time attempting one of the other peaks. Also from the Canadian team, we meet Rob, living with Chrones disease, and follow his attempt to summit Everest, the final leg in his seven summits project. One of the most respected sherpas in the business is preparing to make his world record breaking climb. 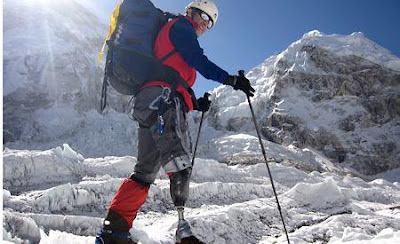 We are revealed to the strenuous work that goes into setting up base camp (and the other camps set up further up the mountain) by Nepalese villagers and the geographical and physical dangers that accompany the climb. As explained by the camp doctor, the oxygen levels are so low that a respiratory ailment automatically rules that individual out. It is extremely dangerous - one in forty climbers who venture above base camp die on the mountain - and the stress on the body is extraordinary. Acclimation is the key and an abnormally gusty day can eliminate a climber's possibility of reaching the top. Selecting the right time to climb within the 40 day window is crucial.
In addition to the climber's stories, we are also educated about the glacier's shifting ice, the supply of fresh water that comes from the melting glacier, and what the sherpas are doing to improve the endeavour every year and allow more thrill seekers to live their dream. There has been an environmentally conscious undertaking put in place to recover the abandoned and unclaimed dead bodies - and these have begun to appear as the glacier melts - and continue to clean up the mountain and remove accumulated rubbish. 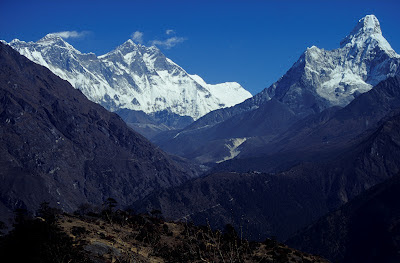 40 Days at Base Camp, while not particularly gripping, has a sense of narrative drive and offers up an intimate insight into this colossal physical and emotional undertaking, and worth a look for the stunningly beautiful captures of the Himalayas and shots of colourful tents dwarfed by the might of their surrounds. Whelan, a photographer, is understandably in awe of the mountains, at times leaving base camp and accompanying the climbers, but in addition to these incredible sights from the top of the world, we also become immersed in what drives these fascinating people. Certainly worth a look on the big screen because of some of the captures, but if you miss it at Possible Worlds keep an eye out for it on DVD (or it may screen on television) because it is a rewarding investment.

40 Days at Base Camp is screening at Dendy Opera Quays at 4pm on Saturday 18th August.
Posted by Andy Buckle at 2:46 PM