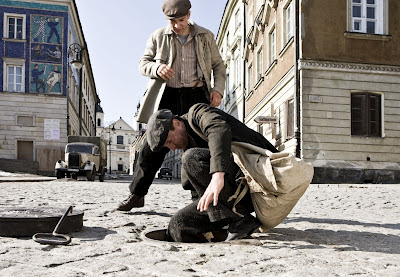 There are five films released Australia-wide on August 26th, arriving in the shadow of The Dark Knight Rises. They are: Magic Mike, LOL, In Darkness, Sleep Tight and If We All Lived Together.

Magic Mike - Set in the world of male strippers, Magic Mike is directed by Steven Soderbergh (Ocean's Eleven, Contagion) and stars Channing Tatum (21 Jump Street) in a story inspired by his real life. The film follows Mike (Tatum) as he takes a young dancer called The Kid (Alex Pettyfer) under his wing and schools him in the fine arts of partying, picking up women, and making easy money. Also stars Matthew McConaughey in what some have claimed to be an Oscar-worthy performance. Vibrant & stylistically inventive but above all a layered/moving character study. A look at multiple personalities/generations of the male stripper industry - the ageless maverick, the talent who wants out, and the youngster seduced by the world. McConaughey is outstanding (again) and Tatum impresses. Review up later today.

LOL - An authentic story that perfectly captures coming of age in today's digital world, LOL is a remake of the hugely popular 2008 French film LOL (Laughing Out Loud). Starting a new year of high school, Lola (Miley Cyrus), (or "Lol," as her friends call her), works to find the right balance between family, school, friends and romance. Broken-hearted by her ex, Lol's world is soon turned upside down when she is surprised to find her best friend, Kyle (Douglas Booth), a musician in an up and coming rock band, could possibly be the love of her life. In her quest towards independence, self-identity and young adulthood, Lol discovers that while Facebook "status" is easy to change; true relationships are worth the effort.

In Darkness - From acclaimed director Agnieszka Holland, In Darkness is based on a true story. Leopold Socha, a sewer worker and petty thief in Lvov, a Nazi occupied city in Poland, one day encounters a group of Jews trying to escape the liquidation of the ghetto. He hides them for money in the labyrinth of the town's sewers beneath the bustling activity of the city above. What starts out as a straightforward and cynical business arrangement turns into something very unexpected, the unlikely alliance between Socha and the Jews as the enterprise seeps deeper into Socha's conscience. The film is also an extraordinary story of survival as these men, women and children all try to outwit certain death during 14 months of ever increasing and intense danger. Nominated for Best Foreign Language Film at the 2011 Academy Awards.

Sleep Tight - An embittered concierge at a Barcelona apartment building plots to make one happy-go-lucky resident completely miserable in this psychological thriller from [REC] and [REC 2] co-screenwriter/co-director Jaume Balaguero. Marcos is a wretched man who subsists on the pain of others. Though the residents rarely take notice of him, Marcos furtively observes of every intimate detail of their lives, seething at the first signs of optimism and cheerfulness. Carefree tenant Clara King is far too perky for Marcos; the happier she gets, the deeper her doorman sinks into despair. In order to be happy, Marcos realizes, Clara will have to suffer. Though at first Marcos ' plan to torment Clara from afar goes off without a hitch, things start to fall apart when the scheming doorman gets too confident for his own good. Just as Clara begins to suspect that her curious bad luck streak may be coming to an end, however, Marcos summons all of his strength and resentment to deliver one last devastating blow. Screened as part of this month's Spanish Film Festival.


Weekly Recommendation: Magic Mike, contrary to what the marketing suggests (and it makes sense to headline Tatum's dance moves as the draw-card to attract female audiences), is a layered character study and is actually quite moving. Sleep Tight is an excellent psychological thriller; features a creepy protagonist and villain and delivers suspense in spades. In Darkness is a Holocaust story and was nominated for Best Foreign Language Film. I'd say it is worth a look, but its release is very limited.
Posted by Andy Buckle at 10:48 AM