The reason I have not posted the winners of the 84th Academy Awards up earlier is because I was hosting an Oscar Party and rushing off to blog is pretty antisocial. The day was great. We drank some wine, and had several great discussions about film - including a fantastic late night one about The Girl With the Dragon Tattoo. It picked up just one award, but it was the consensus that Reznor/Ross should have won for their score (though they weren't even nominated), Rooney Mara's performance was the strongest in her category and that in this conservative year it would have been great to see the film recognised for Best Picture. Still, it won the award that made me the most excited - film editing. What a shock to see Kirk Baxter and Angus Hall back on stage. They deserved it though.

Oscar rundown - Oh god, Billy Crystal is awful. Actually that opening montage was pretty funny. What was with Jennifer Lopez's dress? Aww I love Jessica Chastain, she is adorable. I hope she wins. No, Octavia Spencer. I really admire Christopher Plummer. What a fantastic speech. Cirque Du Solei was impressive. That Emma Stone/Ben Stiller sketch was actually quite good. Okay, getting tired of RDJ's doco now. Bret McKenzie is on stage. Angelina is presenting an award...and has a leg. Woody is absent. I would have liked to have seen Farhadi back on stage. Alexander Payne is always a class act. Spotlight is on Viola, but I'm looking at Chastain in the background. Hey, Jean Dujardin wins. Meryl. Ugh. Hazanavicius is back again. The Artist wins the biggie, and Dujardin is at the back playing with the dog. 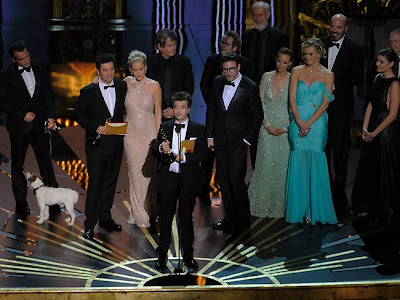 After Hazanavicius won Best Director this was fairly inevitable, though Hugo had picked up a bunch of awards earlier in the night, which made us question whether it might cause an upset.

Yeah. Before the night, and before Hugo's string of awards, this seemed like a sure bet. Not a surprise, but I half expected to hear Scorsese's name called.

This is a class act. Fantastic speech from Plummer.

Standing ovation. She was very good. But I wanted to see Jessica Chastain give a speech.

I had Moneyball, but this is a fantastic adaptation and not a surprise.

Woody wasn't even there. Another 'shocker'. I would have loved to have seen Farhadi on stage again.

Though I haven't seen any of the nominees this still struck me as a surprise. I expected Paradise Lost 3: Purgatory to win this.

At this point in the night, I think this was the first actual deserving award.

The first award of the night, and a big shocker. I figured it would go to Lubezki for The Tree of Life. It had to. Alternatively, I thought Schiffman. Richardson was a surprise, as beautiful as Hugo is.

Best Film Editing: The Girl With the Dragon Tattoo

Fantastic decision by the AMPAS. I called this quite a while back, but because of the likelihood of The Artist winning Best Picture, I figured it would pick up Editing. Baxter and Hall also won last year for The Social Network.

At this point, if Howard Shore won for Hugo, I was sure it was going to make a sweep. But Bource picked it up. One of the 11 I got right.

*Shakes Head* Did they see Rise of the Planet of the Apes? This one is wrong.

I was convinced Meryl wasn't going to win now because they had already honoured what made her performance so memorable. 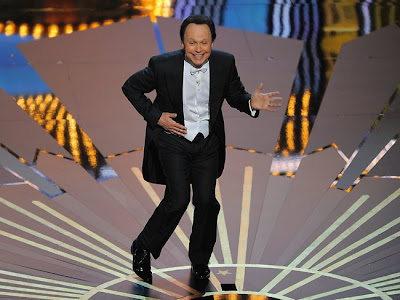 Well there we are. Another Oscar year over. The ceremony was classy (mostly) and Billy Crystal was as safe and conservative as they could get. Having said that he made a few poor taste stabs and that 'Guess what you're thinking' bit was just plain insulting. Poor Nick Nolte. Either he should have done a Gervais and went all out, or kept it clean and fun. Not no man's land. There were some pleasant surprises (Baxter/Hall), but mostly annoying ones (Tree of Life and Apes overlooked in cinematography and visual effects, and Streep). Getting used to being disappointed on Oscar Day. But, it marks an occasion every year, and though it was a less-than-stellar line-up this year, I'll be back again for more in 2013.
Posted by Andy Buckle at 9:53 AM