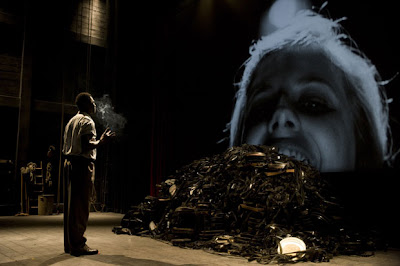 Hey everyone. I'm sure most of you know now that I decided, stupidly, to change my url during the week. Complications have ensued, and basically my old url name is still attached to Andy Buckle's Film Emporium in the Google searches, meaning that most of the links lead to a blank page stating that the site no longer exists. It still does, but under http://thefilmemporium.blogspot.com. If you followed me in a Google Reader, or via email, it is very likely you will have to de-follow and follow again. Also, if you followed me through Blogger, I don't think my posts are appearing to you through the Dashboard. You will have to re-follow me at the new url and feed. Also, if you link to me through your Blogroll, I would be very appreciative if you could update the link.

It has been a stressful week, and to demonstrate how much my readership has been decimated (basically, I have had about 3 views through Google Searches) I will provide this image:

But, the content has continued, and I have been linking to everything through Twitter and Facebook. Released in cinemas last Thursday were This Means War, Buck and The Grey - and I hope to catch the only film I am yet to see from that week (well, except One for the Money), My Week With Marilyn, tomorrow. I also watched I Saw the Devil and provided my Predictions for the 84th Academy Awards.
But, on with the links:
Ruth @ Lets Be Splendid About This reviews M. Hulot's Holiday. Such a funny film.

Steve @ 1001Plus has been watching some great films recently. Among them are Day for Night and Vivre Sa Vie.

One of my newest Sydney friends, Sam, who writes at An Online Universe, is a fantastic writer. This week she has reviewed The Grey, and shares her Oscar Predictions.

Alex @ And So It Begins put a lot of work into his latest instalment of The Directors. He provides a capsule review of every film in the resume of Spike Lee.

I wasn't a big fan of The Deep Blue Sea, but Diana @ Aziza's Picks writes a lovely review of the film.

Nikhat @ Being Norma Jean outlines the 10 Best Villains From 2011. Her top choice is a very good one.

Bonjour Tristesse has been working through the works of Dario Argento. He started with the wonderful The Bird With the Crystal Plumage, and has most recently reviewed Four Flies on Grey Velvet.

Thomas Caldwell's review of Shame @ Cinema Autopsy is one of the best reviews of the film I have read.

Sati @ Cinemantic Corner has one of the best-looking sites around. A pair of posts - 48 Hidden Images in Black Swan, and 15 Memorable Sex Scenes - reveal this perfectly. Also, I dig her rating system.

Stevee @ Cinematic Paradox still has plenty of 2011 Releases to see in 2012. In fact, she has some of the best.

Wow, French Toast Sunday is an awesome site. Lindsay lists her Top 10 Dario Argento Films in time for the LAMBS in the Director's Chair.

Corey @ Just Atad caught up with 2012 Oscar Nominated Animated Shorts this week. Find out what he thought of them.

The Kid in the Front Row muses on the Length of Films.

Colin @ Pick 'n' Mix Flix gave Another Earth a glowing review. Perhaps I didn't give it enough credit when I saw it last year at MIFF.

Tyler @ Southern Vision lists his 50 Essential Arthouse Movies and has been working through the works of Robert Bresson. He also reviews one I need to catch up with, A Man Escaped.

Over at the LAMB the 5th Annual LIONS Awards have started, with Senna and A Separation taking out Best Documentary and Best Foreign Language Film respectively. There is a reason why they were my two favourite films from last year. Also, The LAMBCast devours the Oscars, with the gang sharing their Oscar Predictions.

Jessica @ The Velvet Cafe believes she is going to cop some crap for her favourable review of War Horse. Each to their own, and Jessica argues her case very well, as always.

Steven @ Surrender to the Void focuses on the films of Wes Anderson in his latest Auteurs Edition. There is so much work in this post it is unbelievable. Essential reading for Wes Anderson fans.

Well, that is all for this week. Thank you to everyone who has offered their support and advice throughout the week. I hope not too many of you lost track of my site for too long. My output has not changed, but now I am behind on my viewing schedule. I spent so much time getting my blog back on track, that I wasted a couple of days. Oh well. Things happen. The swearing and  threatening to throw things day was Friday, and it has been increasingly optimistic since then. Hope everyone has a great week.
Posted by Andy Buckle at 12:51 PM