I Saw the Devil is a South Korean film directed by Kim Ji-Woon, and written by Park Hoon-jung. It first premiered at the 2011 Sundance Film Festival. The film opens on a snowy night, and a young woman is stranded with a flat tire in the middle of nowhere. A man, driving by, offers his assistance but because she is awaiting a tow, he is turned down. Unbeknownst to the young woman, this man is a sadistic killer named Kyung-chul (Choi Min-sik, Oldboy) and during the night he kidnaps, rapes and murders her and scatters her decapitated body parts. When her severed ear is discovered the next morning, a police investigation commences – led by her father, Squad Chief Jang (Jeon Kuk-hwan). When her identity is confirmed, her fiancé, Soo-hyun (Lee Byung-hu, The Good, the Bad and the Weird), a special agent, becomes determined to track down and take personal vengeance against her murderer. He receives a list of suspects from Jang, tracking down each one, and inflicting serious pain – before setting his sights on Kyung-chul, who has since continued his murderous rampage. 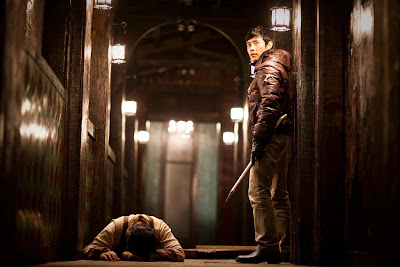 Content-wise, I Saw the Devil is an extremely ugly film. It actually borders on unwatchable at times, but because the filmmaking is so exceptional, it never ceases to be captivating. Just when we think we have seen it all (Kyung Chul’s massacre of two men in a vehicle for example), we are introduced to his cannibalistic acquaintance, scoffing down the raw remains of one of his victims as Kyung Chul’s arrives at his house to lay low. There is nowhere to turn when looking for a hero, because Soo-hyun turns into a monster himself. His blind fury and his tragic underestimation of his target – rather than kill him quickly, he plants a tracker inside him and follows him, allowing him to recover, before inflicting more pain and suffering on his body - has severe consequences. Losing control of his target, a seemingly unconquerable psychopath, results in the lives of his fiancés family being threatened. Not only does the death of his fiancé and his own trip to the dark side weigh on his conscience, but also the lives of innocent people, brought into this mess because of his personal vendetta.

The performances are extraordinary. Choi Min-sik’s sadistic villain, Kyung-Chul, is one of the most horrifying characters I have ever seen grace a screen. He is pure evil – and what makes him even more despicable are that his atrocities are accompanied by this sense of relish and self-satisfaction. He spends most of the film scarred from beatings, and limping around, so it must have been a strenuous shoot. In an extremely intense role, Lee Byung-hun is also excellent. Having to balancing a desire to inflict pain and torture on the man responsible for destroying his life, while at the same time horrified at what he finds himself doing, Lee pulls it off admirably. 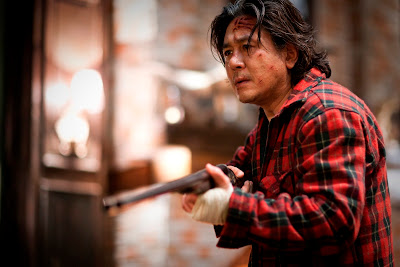 One of the few problems I had with the film was its length (144 minutes), and the incessant grisly mayhem rarely lets up as the narrative becomes increasingly ridiculous. Within minutes we have already seen the brutal murder of this helpless young woman and her vile dismemberment, and this unpleasant sort of thing continues up until the final minutes. While the filmmaking is exceptionally accomplished – cleverly scripted, beautifully filmed, edited and scored - each spectacle of violence is shockingly realistic, and doesn’t shy away from exposing it to the audience, turning the film into an unexpected endurance test.
Though the film’s emotional backbone (whether revenge can truly aid one's grievances, and whether it justifies sinking to the level of the monster you’re seeking revenge against) is effectively relayed, as well as subverting the conventions of the serial killer thriller and revenge film, it still feels like Kim and Park keep challenging the audience by asking: How much more of this gruesome violence can you stomach? Considering the beating that Kyung-chul receives throughout the film, he should not be able to defend himself as well as he does. At one point his Achilles tendon is severed, which should have immobilized him for a lot longer than it did. But, considering how suspenseful some of the sequences are, this cat-and-mouse revenge thriller does enough right to make a viewer forgive the implausibility. 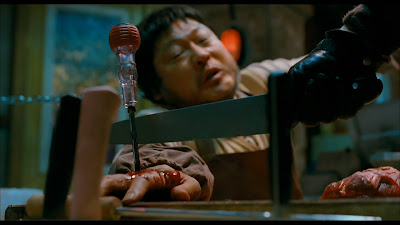 Though it is violent to an often-unsettling extent, I Saw the Devil is not a scary film. I was not lying awake that night haunted by the images, but a lot of the scenes of torture are very difficult to watch. But, this might be one of the best-looking ugly films I have ever seen. For a film that feels like a pulpy B-grade horror, the photography is absolutely stunning, especially the wintry night captures, and every splash of red (there is a lot of it) pops off the screen. If I could compare a recent film that manages to create such an unsettling atmosphere and is viscerally on the level of I Saw the Devil, it would probably be Nicholas Winding Refn’s, Drive. Yeah, that good. Every frame is cleverly constructed and there are numerous altercations between Choi and Lee that defy belief. The score is fantastic, there are some inventive set pieces, and the make-up and effects team should be credited for making the infliction of violence ‘feel’ so real.
I Saw the Devil is an often-maddening revenge thriller not recommended for the squeamish, and while it works as a fascinating study into the moral complexities that blur the lines between sadism and heroism, I was simply in awe of Kim Ji-woon’s work. I can’t say I will revisit the film anytime soon, but for genre fans, it's one you shouldn’t miss.