Killer Elite, Australian director Gary McKendry’s debut feature (which has an unfathomable budget of $66 million) is based on the ‘The Feather Men’, Ranulph Fiennes’ expose of the SAS’s role in a late 60’s war in Oman. The events have been shifted to the 80’s with one of the world’s elite operatives, Danny Bryce (Statham), hired by a vengeful oil Sheikh, who is holding his mentor and partner, Hunter (Robert De Niro) hostage. He is assigned to hunt down and assassinate three ex-SAS men who had been involved in the killing of his sons during the devastating war. But, they must look like accidents, and there must be a recorded confession along the way.

The first problem is the film’s opening scene, a kinetically photographed, but poorly staged hit, which fails to engage audiences but immediately relays the sort of film they are to expect (and this serves up no promise, but actually makes one quite concerned with what might follow) and results in Danny killing a man in front of his innocent child, prompting him to retire from the game. “I can’t do this anymore” he exclaims. That’s what they all say. He hides out in Australia, where he meets a local girl, before being tracked down and lured into one final job – rescuing Hunter.

Another problem is that Hunter is being held, not in a prison, but in a spacious room on the Sheikh’s estate. Hunter and Danny, during an early escape attempt, almost succeed in evading his captors. The motivations to take on these “impossible hits” are flimsy to begin with, but the film is so badly staged, and so amateur at times (an incriminating phone call in the company of a dangerous man is not made in a covert way in another room, but only a few steps away) that there is never any interest invested in either side. 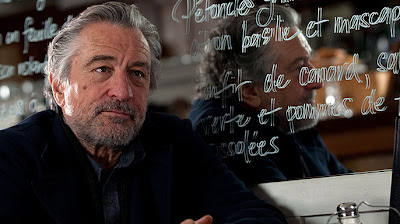 As the assassinations commence, a secret society protecting the SAS, known as The Feather Men, enlist their life-scarred enforcer, Spike (Clive Owen), to stop Danny and his team from wiping out their former operatives. It becomes personal for Spike, because these targets are also his friends. None of these characters are good men. All are killers. All have wronged, and to see them beat up one another is well short of satisfying.
We are asked to accept that Danny is an elite killer simply because Jason Statham plays the role (and he has been a killer so often before). His gravelly, overly serious portrayal is stock-standard, pay-the-bills stuff. Aden Young is there. Grant Bowler. Ben Mendelsohn (Animal Kingdom). Adewale Akinnuoye-Agbage (OZ, Lost). The latter, especially, is quite a gifted actor – but is given a horrendous role here. All of them are sporting some atrocious accents. Dominic Purcell (who many will know from Prison Break) at one point pretends to be Welsh, but the SAS agents aren’t convinced. Neither are we.
For a mindless action film, the plot is muddled and downright confusing - covering the globe from Australia to Paris, London to the Middle East. There is very little that will appeal to a hardcore action junkie, perhaps with the exception of a desert chase scene, which briefly raises the heart rate, and Statham taking out multiple assailants while tied to a chair. He then jumps out a high storey window, using the chair to break his fall, and cutting his bonds in the process, immediately making this scene far less cool.

Killer Elite is a pointless, disposable action vehicle, which features a never-ending stream of nonsensical and poorly staged action sequences that are haphazardly edited together, an abundance of genre clichés, woeful dialogue, unlikeable and unconvincing characters, flimsy motivations, a bloated running time (it drags terribly near the end, and actually has several false endings), an emotionless romantic subplot, and one of the worst screen beards of all time (owned by Dominic Purcell).

On the plus side, Clive Owen gives his character a bit of menace (even if he does at one point turn over his coffee table in anger) and De Niro is surprisingly watchable. Ultimately, this is a ‘Jason Statham action film’ – now it’s own sub-genre - but it is so bad that it makes The Mechanic, an infrequently entertaining, but disposable shoot-em-up, look like a masterpiece. I don’t know what prompted Clive Owen, above all, to choose this role – but it is a stupefying film experience I want to immediately forget.