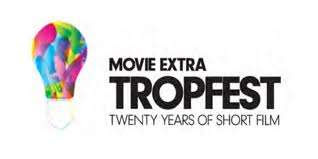 Movie Extra will be offering an open feed of the live broadcast so that everyone can access the action and excitement of the event, hosted by the comedy duo of Adam Spencer and Julia Zemiro. The broadcast will screen the 16 finalist films, live celebrity interviews and a live performances by music act Faker, direct to viewers across the nation.

Join Movie Extra red carpet hosts, Renee Brack and James Tobin for all the glitz and glamour of the celebrity arrivals, with a line-up of Tropfest star judges including Geoffrey Rush, Charles Randolph and Damon Gameau, with more judges to be revealed on the night. A host of VIP guests will attend the event, including Joel Edgerton, Josh Lawson and the cast of the FMC TV series, Conspiracy 365.
Posted by Andy Buckle at 7:13 PM