I think it is safe to call Chronicle, the ‘first-person footage’ sci-fi fantasy, written by Max Landis and directed by Josh Trank, a very pleasant surprise. The real-world superhero plot feels like it has been done to death, but watching three high school classmates come-to-terms with super powers (documented almost-completely through the camera skills of one of the gang) is smart, unique, engaging and technically innovative. 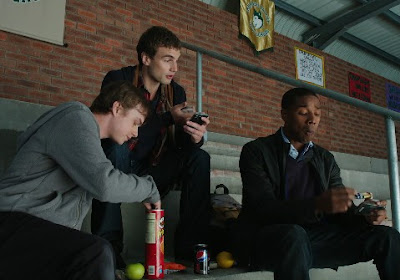 Three high-school classmates: Andrew (Dan DeHaan), a shy, unpopular and socially alienated outcast, his psychology-infatuated cousin, Matt (Alex Russell, Wasted on the Young), and School President candidate, Steve (Michael B. Jordan), investigate a suspicious hole in the ground at a rave party. Exposed to a mysterious substance, they find themselves in the possession of inexplicable super powers. Sure enough, as they learn the extent of their abilities, their ordinary lives take on an extraordinary turn.

Initially they use their powers to play innocent pranks on themselves and people around them, but gradually gain confidence with their abilities, which makes them invulnerable (with the exception of frequent nose bleeds). Their shared secret and newfound sense of immorality forces them to evaluate how they are utilizing their powers, and ultimately decide where to draw the line about how far they should go. Their bonds are tested when one of the gang starts utilizing his power for darker deeds.
Firstly, I thought the cast was solid, with each of the youngsters giving their characters a distinct likeability and relatability, drawing sympathy when their lives start to unravel as a result of their mutual experiences, and the distrust that begins to develop. DeHaan, particularly, shows a lot of talent. It is interesting to note that Michael Kelly, a longtime character actor, has a small role as Andrew’s abusive father.

One of the film’s themes (and it’s largely ignored directly) is the prevalence of new technologies (iPhones, iPads etc.) that allow people to record and comment on every event in their lives, sharing their every emotion and opinion with the world, no matter how mundane. It is never revealed why Andrew becomes obsessed with filming everything (perhaps to document his father’s abuse, or to put up some sort of barrier between himself and the displeasure of his existence) but for the sake of the story, he actively desires to chronicle their lives and his camera is always present. Luckily, there are only a few occasions when his footage is unwarranted. In most footage films, there are always instances where the ‘filming’ seems unnecessary, but being what they are, it remains in the film.
After taking his camera to school and revealing where his locker is and where he eats lunch, the focus of his footage becomes much more fascinating and as a result, there are some really extraordinary captures. One where Andrew and Steve fall from the clouds, after nearly being taken out by a plane, is one spectacular example. There are some really inventive camera innovations - Andrew develops the ability to control this camera and often has it floating above the actors as they converse – and the visual effects were very impressive.
What is interesting about the script is the way each of these characters utilize their powers, and how their individual lives impacts on and influences their willingness to use their abilities. The aggravation and humiliation Andrew's peers and his abusive father cause him, as he also struggles to cope with his mother's sickness, results in him using his powers recklessly and ultimately in a self-destructive fashion.
There were plenty of early laughs, and watching the three leads (who have a playful chemistry) learn to harness their unique power is very entertaining. But with powers such as the ones they develop; highly skilled telekinesis, increased motor functioning, meaning they can influence their bodies to complete almost any function (including flying at great heights), and the ability to control any object, there is continued risk of accidents (one close scrape with a truck driver), being discovered, or impulsively using their gifts maliciously. Here we see a group of ordinary kids stumble across some unique abilities, but then struggle as individuals to harness their powers when faced with the pressures of their own reality. 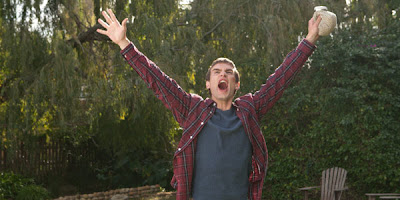 Chronicle is let down slightly by a corny romantic subplot involving Matt’s character and a video blogger from school, conveniently allowing the film to shift over to her footage whenever Andrew wasn’t present with his camera in hand. Then, I really don’t know who was filming the concluding sequences. Was it meant to be a collaboration of witnesses using hand-held electronic devices to capture the events? I’m not sure. The surprisingly dark turn made in the final third, though conflict had adequately been set up, still felt unjustifiably extreme.
I felt like the second half was less successful, and it seemed like the filmmakers had crafted this unique idea, but didn’t quite know where to take it. Considering where a lot of big-budget superhero films end up, this has similarities in that it becomes a hero/villain struggle – but unique considering where the villain has come from, and what their now-mastered abilities allow them to do. Overall, I thoroughly enjoyed Chronicle. The cast was great, and considering the budget (pretty miniscule) the visual effects and technical innovations were impressive. A solid addition to the ‘found footage’ genre, though I don’t know if that description is entirely accurate here, and well worth a look.
My Rating: ★★★1/2 (B-)
Posted by Andy Buckle at 4:42 PM