The Day I Saw Your Heart, directed by Jennifer Devoldere and making its Australian Premiere at the 2012 Alliance Francaise French Film Festival, is a breezy, mature and touching comedy-drama that offers few challenges to an audience - except requiring them to overlook a messy conglomeration of narratives - but offers up a talented and likeable cast, a toe-tapping soundtrack, light-hearted laughs and several poignant moments. The Day I Saw Your Heart is a little twee, but it is an experience that should prompt viewers to closely consider and further value their relationships with their loved ones and to never underestimate the surprises (both wonderful and devastating) that can influence them. 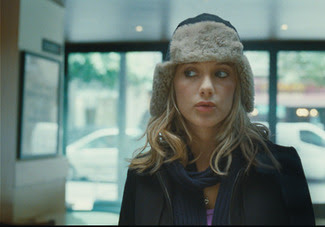 Beautiful twenty-something, Justine (Melanie Laurent), an aspiring artist working full-time at a radiology lab, and the youngest of three sisters, has been plagued by failed relationships. After dumping yet another boyfriend, she moves onto the sofa at her sister’s place. Dom and her husband, having failed on countless occasions to produce a child, are planning to adopt. Meanwhile, the women’s tactless and selfish 60-year-old father, Eli (Michel Blanc), announces to the family over dinner that his much younger third wife is pregnant. It is to be his first child since Justine.
This is a film that chronicles the complex disturbances that have caused unrest within the family, and the miracles and tragedies that bring them closer together over the course of the film. Dom is desperate for a child, and while Eli’s wife is overjoyed by the prospect of a new addition to the family, he seems to be indifferent, more concerned with befriending Justine’s exes (a couple of them work for him) and improving his golf game. He retires, leaving the business in the hands of his younger associates, but during his twilight hiatus, manages to insult and upset his entire family, before learning (completely by chance) some debilitating news about his health.

If it seems like there is a lot going on, there is. The film doesn’t really have much of a central story to maintain the audience’s engagement. It is down to the individual experiences of the ensemble and how, over the course of the film, they converge and influence one another. Eli seems to be oblivious to how cynical and insulting he is – and how insensitive he is to Justine by socializing with her exes. The reasons for their estrangement aren’t explained very well, though his peculiar behaviour, and more specifically, his very direct opinions (insensitivity towards the drawing of three-year-old for example) have proven to be a character trait Justine has not forgiven.
A nice touch to Justine’s character is the fact that she has an inventive artistic vision and uses her access to the radiology equipment to secretly take x-ray images of what would normally be mundane household items. She then assembles the images together to recreate the objects, creating the illusion of a 3D x-ray. Her first subject is the body of her newest flame, Sami, a clerk at a shoe store next to the clinic. It is through these dates with Sami that we learn more about her family. As we question why we are being filled in through this manner, Justine embarrassingly comments about how serious their conversation, for a first date, has become. It is moments like this where the script is self-aware of how lazy it is being, and tries to amend that. It is forgivable. Ultimately it is her father’s interest in Sami that leads to the brief deconstruction of her life.

The performances are strong. The highlight throughout is the compelling and breathtaking Laurent, who has become well-regarded following prominent roles in Inglourious Basterds (2009) and Beginners (2011). Many may also remember her from La Rafle, which played at last year’s Festival. She is convincing as a young woman frustrated with her relationships, and trying to find some peace in life through her art. Also excellent is Michel Blanc. He has fantastic comic timing, while Laurent is great at tying in feelings of uneasiness and nervousness into a conversation.
While The Day I Saw Your Heart is far from hilarious, it does offer up some pleasant and amusing moments. The film is more effective in it's dramatic tone, but it balances the morose with the lighthearted quite well. Despite not offering anything new, it makes for a contemplative and rewarding experience.