The Grey is an American survival thriller directed by Joe Carnahan (The A-Team, Smokin' Aces). It is based on a short story called "Ghost Walker", which is co-adapted by writer Ian MacKenzie Jeffers and Carnahan himself. While the film promised, at least, the possibility of Liam Neeson battling a wolf, it actually offered up so much more. It is a film will raises a lot of different emotions from audience members - tension and fear, sympathy and sadness - and is the first truly memorable official 2012 release to hit cinemas. 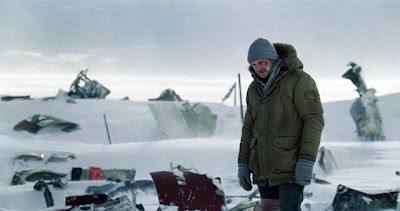 The central character in The Grey is Ottway (Liam Neeson), a world-weary Irishman who works in Alaska, protecting a team of oil drillers from the wolves that live in the region. Following the completion of their current job, Ottway and his colourful band of ragtag cohorts are on their way back home for a break when their plane is caught in a blizzard, and being unable to withstand the conditions, crashes into the Alaskan wilderness. There are only a few survivors - and Ottway counts seven - when Lewenden (James Badge Dale), mortally injured from the crash, devastatingly succumbs to his injuries. These men include Flannery (Joe Anderson), Talget (Dermot Mulroney), Diaz (Frank Grillo, outstanding) and Hendrick (Dallas Roberts). They soon discover, amidst the wreckage and the strewn bodies, that they have landed in the territory of a pack of bloodthirsty wolves. Lacking supplies or weapons, they try to make their way to a tree line in the hopes that they will situate themselves outside of their hunting area and be better protected. It is not to be, and it becomes a desperate race to find contact, while coping with the harsh elements, their unrelenting predators, and even their own minds.
Firstly, what struck me about The Grey was the fact it actually felt like these actors had been thrown into the Arctic and forced to fend for themselves. Much like in Mission Impossible: Ghost Protocol, where Brad Bird, in his attempts to make his audiences believe that Tom Cruise was circumnavigating the world’s tallest building, actually took him there. It feels like Joe Carnahan has done the same thing here. We feel every aching footstep and the icy wind as it cuts through their layers, because we have seen what they have already survived, and what lies ahead, and we wholeheartedly sympathise with them. 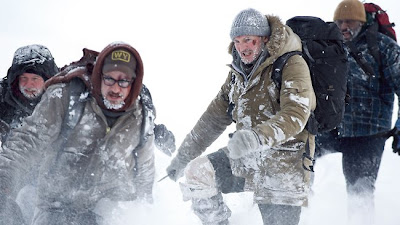 Immediately, Carnahan builds a terrifying atmosphere (and this is aided by the fine photography by Masanabou Takayanagi, the often deafening sound of the fierce snow storms, and the effective use of the score). There is an ever-present sense of dread amongst the crew that the wolves are stalking them, as well as fears that the elements could shift for the worse at any time. Of course, if they didn’t make contact soon, there is the risk of dehydrating and starving to death. Watching them battle a fierce blizzard instantly causes one to fear for these characters – and when you throw in the presence of wolves, it becomes doubly intense. There are some effective jump scares (but Carnahan is clever enough not to rely on them throughout the film) and terrifying reveals of the wolves, but also some extremely tense set pieces (which continue to top the last one). The plane crash itself is terrifying, and the gang’s traverse of a canyon on a makeshift rope should have you aggressively gripping the side of your seat.
While The Grey is effective as a survival film and as a creature horror, it is also profoundly moving. It could have easily fallen into the trap of being too centered on the wolves, and become an implausible action film, but their location is as much of a threat to their survival, and it is the dual influence of these elements that makes The Grey so impressive. It is the unnatural aggression of their pursuers and the hopelessness of their situation that plays on their psyches. Many of them reflect on their families (and Ottway has flashbacks to his wife, and to his father) and share memories and stories with each other. They debate whether God actually exists, with some questioning whether he will make himself known in their desperate time of need. For Hendrick, he seems to believe that paying respects to the deceased, and collecting their wallets for their loved ones, will ease their conscience and aid their journey. This is commendable thinking, considering the situation. But it is the volatile Diaz, unexpectedly, who has the strongest character arc, making the most profound realization of all.
Also, at one point it dawned on me that the wolves were targeting members of the group who showed weakness – tying the story into Darwin’s theory. Hernandez, on watch but playing with a game console, and turning his back on the camp to urinate, is taken out first. Flannery, proving to be the weakest, falls behind during a hike, while Diaz dissents and questions Ottway’s leadership, resulting in him becoming the next target. I don’t know if it is worth delving into the psychology of this more deeply – but I felt like the wolves and the humans mirrored one another at times. Each gang was fighting internally, but doing everything they could to stay alive. The wolves, better adapted, and better hunters, sought out the weakest - while one of the group's wolf victims was dismissed as a scout (a pack outcast) by Ottway. 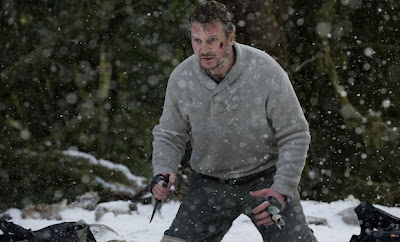 For me, the most moving sequence in the film is near the end, and I don’t want to spoil it, but one of the characters makes a decision. Given what this decision meant, and how he came about making that decision - based on their location at that point in time and their hope for the future - I completely understood. I would have done the exact same thing. It actually brought a tear to my eye. Exemplary performances from Liam Neeson, Dallas Roberts and Frank Grillo, and Carnahan’s brilliant decision to turn this sequence into a lengthy single take, makes this an unforgettable moment in a film full of standout ones.
Lets not forget, these are poorly educated working class guys who slave away at an Alaskan oil drilling station all day, and then drink at the bar all night. I thought the screenplay really nailed the way these guys would talk and react under these circumstances. They are foul-mouthed, act impulsively and don't like to be told what to do. But, Ottway is a hunter, and his unique job makes him the most equipped. Under his collected leadership, they eventually find a way to band together. Though they are scared at the thought of being mauled by wolves, they turn their frustration into aggression. At times, when they are threatened, they are fuelled by their adrenalin, and particularly by the raw emotions of Diaz. If there was a weakness, it is the development of some of the characters. We learn a little bit about them - but Ottway and Diaz are the only two who are really memorable - and there was a couple of missed opportunities along the way to strengthen the others. Still, there isn't a lot to criticise here. This is cleverly executed survival film and one that works effectively as a horror film and as a psychological drama. Check it out.
My Rating: ★★★★ (B+)
Posted by Andy Buckle at 4:57 PM