Casino can be considered a companion piece to Martin Scorsese’s 1990 masterpiece, Goodfellas, with the story also adapted by Nicolas Pileggi from one of his novels (Wise Guy for Goodfellas and Casino here). Robert De Niro and Joe Pesci also return, but do not reprise their roles from Goodfellas. 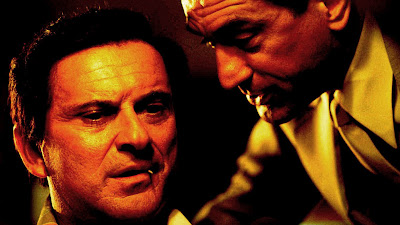 Casino focuses on the lives of Las Vegas mobsters, who work out of Kansas City, during the 1970’s. The mafia has direct involvement in gambling – sending Sam ‘Ace’ Rothstein (De Niro), a sports handicapper, to Vegas to run the Tangiers Casino on behalf of the families. He takes advantage of lax gaming laws, which allow him to work as the casino’s de facto boss (though listed under a less involved title), while his gaming license is pending. The mafia skims the profits before the records are reported to income tax agencies.

Sam’s friend and mafia enforcer, Nicky Santoro (Pesci) is sent in to protect Sam and the business – but several run-ins with Sam, who is concerned that his presence is more of a liability than a benefit, and a ban from casinos on the strip by the gaming board, prompts him and his crew, including Frankie Marino (Frank Vincent, Goodfellas), to start their own shakedowns – using a jeweler as a front. Soon enough, more and more holes are made in the desert, and Sam's affiliation with Nicky makes him a target, while the Kansas City bosses quickly run out of patience with Nicky's unpredictability.


Nicky is just one of Sam’s causes of stress, faced with incompetent staff (whose connections place him in hot water when he fires them) and an assortment of gambling hustlers, finding ways to cheat at blackjack and baccarat using some good baccarat strategy. Sam is always looking over his shoulder in case there is an investigation into his gaming license or proposed mafia ties - and looking into the personal affairs of his wife, Ginger (Sharon Stone), who continues to see an old boyfriend, a conman named Lester Diamond (James Woods).

It is Sam’s toxic relationship with Ginger, a sure-to-be-trouble hustler, which is his biggest mistake and most influences his head for business. Ginger is a train wreck of a woman and an unsavoury human being (an irresponsible parent, a heavy drinker and drug abuser) and is obsessed with the money Sam promised her when they agreed to marry. Sharon Stone is insufferable in the role, and it shocked me to discover that she was nominated for an Academy Award for her performance. She grossly overacted, and though she was supposed to be extremely unlikeable, her despicable character took me right out of the film, and the second half, which are dominated by her desperate attempts to access the safety deposit box she has no moral right to (but unfortunately for Sam, a legal right) and unlike Goodfellas, becomes frustratingly tedious and short of entertaining.
I just didn’t care for any of the characters, and the bosses ‘back home’ had no personality either. They were just a bunch of old guys who are repeatedly handed money throughout the film – and occasionally order someone to be taken out. No doubt this is how it would have been – but my point is the lack of character. This is far from De Niro’s best work (he looks bored most of the time) and Joe Pesci created a much more memorable character in Goodfellas. The film’s ripe language (not even the narration escapes) and often-extreme violence (it is tough viewing watching a guy get his fingers crushed by a hammer, or one have his head squashed in a vice) will be a turn-off for a lot of viewers, but they are trademarks for a Scorsese film. All of the trademarks are here – the large set pieces, the huge amount of extras, the extremely long tracking shots, and the frequent use of montage. It is a shame because Scorsese’s strict attention to detail in capturing the vibrant atmosphere of the casino is really impressive, as are the behind-the-scenes looks into casino’s complex security measures, not to mention the toe-tapping hits that make up the fantastic soundtrack.

The voice-over succeeded in being both explanatory, accompanying almost everything we were witnessing and giving it context and a personal commentary, but also ‘conversational’ with different narrators recounting from their perspective, and often leading into one another. Sam and Nicky were the most prominent – though Frank Vincent also has an opportunity. I thought it became a little bit excessive after while. Scorsese’s Vegas is as much of a neon jungle as it is today, but in addition to being a visually awe-inspiring city, it was gritty, violent, corrupt and confrontational behind the scenes.
Now, with the prevalence of internet casino, making it easier for gamblers to indulge in their favourite attractions without making the visit to Vegas, one can raise the question as to whether the city is brimming with as much life as it used to in this bygone era. Still, Scorsese's vision of the dual faces of Vegas (the glitz and glamour, and the seedy mafia ties) is pretty great. But despite the always excellent work from his team of Robert Richardson, Thelma Schoonmaker and Dante Ferretti, Casino is a tough one to recommend. It has all the pieces to be a gangster classic, the tales of a smooth operator overseeing the successful running of a Vegas casino, and an aggressive strongman who acts as his muscle, but shakes down the locals on the side – but at nearly three hours, it is way too long, and it becomes a rather dull and loathsome experience in the latter half.
Posted by Andy Buckle at 5:51 PM