I can only imagine how much controversy Tenebre would have caused following its release. It didn’t even make it to American cinemas until 1984 and when it did it was heavily censored and under an alternative title. Dario Argento took his giallo blueprint, which he made his own during the 1970’s, into the 1980’s and heaped on the blood and intensity. 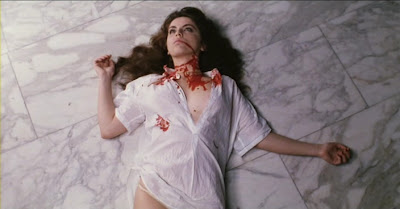 American crime thriller and horror writer Peter Neal (Anthony Franciosa) is in Rome to promote his latest popular novel, Tenebre. Accompanying him are his agent, Bullmer (John Saxon), and his assistant, Anne (Daria Nicolodi). Just prior to Neal’s arrival in Rome, we follow an attractive young shoplifter who is caught trying to steal one of Neal’s novels. She arrives back at her home and is killed by black-gloved figure wielding a razor. A letter from the killer is slid underneath Neal’s hotel room door, claiming that his novels have inspired them to go on a killing spree, targeting women in ways identical to how Neal described them.
Soon enough, Neal finds himself harassed in other ways. More notes (which accompany more killings – a lesbian journalist and her lover) and threatening phone calls. No one, not his assistants, his agent, his bitter ex-wife (who has been following him) or the hotel staff, are free from suspicion or danger, as Neal quickly tries to piece together the clues.

This is one of Argento’s most deranged nightmares. It is engaging from the opening minutes and the mystery is one of his most concise and simple. There are no unnecessary tangents. It is committed to filling the screen with thrilling moments and brutal deaths, and there are some extraordinary make-up effects along the way. 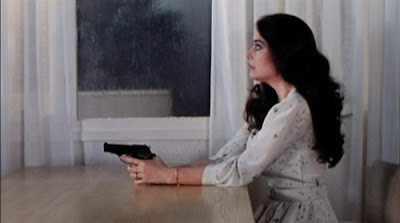 After a break from giallo filmmaking (to make Suspiria and Inferno, two of his most famous films), Argento makes a triumphant return. There is no holding back here. The blood flows regularly, the inventive carnage is relentless, there is an extremely long crane shot that defies belief, and shocking twist after twist. It is a blend of Agatha Christie-style cosy school murder mystery (almost all of the deaths transpire in pretty close proximity to one another and the central hotel) and slasher/chop horror.
Though nowhere near as visually impressive as Suspiria or Deep Red, there is Argento’s ever-present building of suspense, and it is not surrendered here for the sake of jump scares (lots!) and laid-on-thick gore. Also, how can I discuss an Argento film without mentioning Goblin. Their main musical theme is sensational and they again capture the tone for the film perfectly.
Quickly researching into this film after viewing, I discovered that Argento has jokingly considered Tenebre to be somewhat of a fictionalized autobiography. A self-reflexive parody on his work, even. Like Neal is in the film, Argento had been questioned about the violent crime present in his films – and by crafting something so outrageous, I think it would have quenched any such false assumptions about his psyche. There is a merging of fiction and reality here, but explaining why this is the case gives away too much. 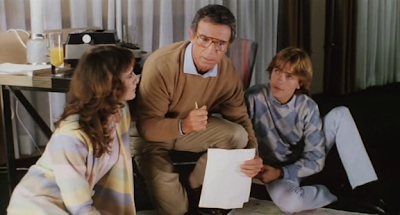 Yes, there are gaping plot holes, and in the attempts to keep this film brimming with twists and turns, things get pretty implausible, but it matters very little. There are times when Argento is almost parodic with Tenebre. You will ask yourself at times: did there really need to be that much blood? He is such a gifted filmmaker that instead of coming off as cheap and corny, it remains as captivating and horrifying as ever.
There is a very obvious shift in the killer’s methods at the halfway point of the film. There are hints given throughout, and we try and weigh up the suspects. Often, when Neal investigates a prime suspect, they are killed off, jolting our expectations. This is a common trope in Argento’s giallo films. I have not failed to be surprised by an Argento twist yet - “when you have eliminated the impossible, whatever remains, no matter how improbable, must be the truth.” While not Argento’s best film – Deep Red, Suspiria and The Bird With the Crystal Plumage still top for me – this is one I will come back to again and again. It’s insane.