Like Crazy is an independent romantic drama from director Drake Doremus. Loosely inspired by Doremus’ real-life experience with his ex-wife, he also co-wrote the screenplay with Ben York Jones. Like Crazy won the Grand Jury Prize for Best Film at the 2011 Sundance Film Festival and awaits an anticipated, though limited, Australian release on March 1. 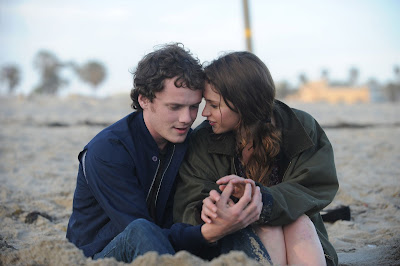 The poignant and heartwarming Like Crazy follows the story of a bright British college student, Anna (Felicity Jones), and her long-distance relationship with a fellow American student, Jacob (Anton Yelchin). Anna, an aspiring journalist, is a foreign exchange student, and after having fallen in love with Jacob, a talented furniture designer, decides to overstay her student visa, which expires after graduation, and spend the summer with him. After her brief return home, when she arrives back in Los Angeles and tries to re-enter the country, she is denied entry at JFK and sent back to England, leaving the pair with no choice but to remain in a strained long-distance relationship. Deeply in love, this proves to be a frustrating burden, which begins to influence how they each live their lives and the decisions they make about their future.

It is another film that captures the beauty of young love and develops a 'perfect match' couple. The story is tragic because of the unforeseen obstacles that keep them apart and test the strength of their commitment to one another. There are a couple of surprises. Not long after the pair agrees to marry so that Anna can once again return to the United States, they have a confronting row. The next time we see each of them, they both have new suitors (played by Jennifer Lawrence and Charlie Bewley) in their separate cities. We assume quite a bit of time has passed between these events, but because the film doesn't show us everything - just the important chapters of their lives – it is a jolt to see how quickly they have moved on to a new lover, considering that they are legally married.
The film’s strength is definitely the performances. Both Yelchin (Star Trek) and especially Jones (Chalet Girl, and winner of the Jury Prize at Sundance) are young talents. It was Jones’ character that I most cared for, because it was made far more evident in her body language that she was completely in love with Jacob. The way she looked at Jacob was at times quite intoxicating. They each find work, and become quite successful - but it is really only Anna who tries to come up with a way of making their relationship work. Jacob seems indifferent, and unwilling to put the effort in. 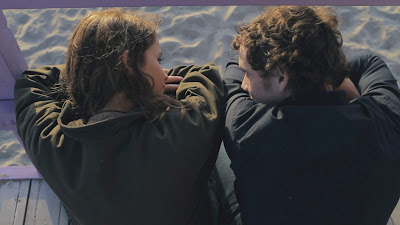 The chemistry between the pair is sweet and innocent to begin with. There is an early montage capturing them partaking in all kinds of outings and adventures that young lovers tend to do. It seems that they may be wise beyond their years, but with love clouding their judgment, they also prove to be naïve. Despite warnings from her parents that overstaying the Student Visa could lead to complications, Anna decides to stay anyway, and the repercussions prove to be toxic toward their relationship, and the catalyst for the conflict within the film.
In addition to the two leads, the supporting cast was also good. Jennifer Lawrence was effective, but underused. Her character wasn’t that interesting to be honest. What is a somewhat interesting tangent, however, is Lawrence and Yelchin also hooked up in The Beaver. When you take into account that the cast largely improvised their performances, their work is even more impressive. By taking the time to manufacture improvised responses, gives the film a natural energy and a more intimate atmosphere. 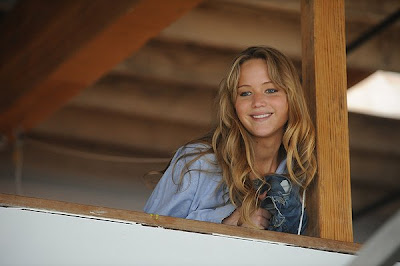 Anna and Jacob's first date, Anna's late night call to Los Angeles and the first awkward conversation shared by the two, Anna and Jacob's text correspondence when Jacob is out clubbing with Sam, and a cringe-worthy marriage proposal were some of the highlights - but the nicest moments are the quiet ones capturing Anna and Jacob just lying together on their beds, conversing about trivial events.
Like Crazy, shot on a very low budget with a Canon EOS 7D camera, shares similarities with Blue Valentine and Weekend (films that chronicle two characters that fall in love but whose romance likely won't work). Unfortunately, the characters just aren’t as rich here. It is hard to empathise with Yelchin’s Jacob, and whether they find a way to get back together, is never something we desire with any real invested emotional interest. I did like the final scene and I sensed a hint of ambiguity there, which was thought provoking. For sure, it has put Felicity Jones (and Drake Doremus) on the map, but it ultimately fell short of satisfying.