Alliance Francaise French Film Festival Review: Nobody Else But You (Gerald Hustache-Mathieu, 2011)

Nobody Else But You, which screened in the Main Competition at the 2011 Chicago International Film Festival, is written and directed by Gerald Hustache-Mathieu. David Rousseau (Jean-Paul Rouve), a best-selling crime novelist from Paris, is looking for a good story and inspiration to help him with his new novel. He journeys to Mouthe, a remote mountain village near Bordeaux (I believe), and on the way passes a troupe of policeman carrying a body bag. Inquiries reveal that Candice Lecoeur (Sophie Quinton), a vibrant young starlet, local model and weathergirl, had been found buried in the snow having committed suicide. The local police believe it is an open-and-shut case, but David, sensing a good story, decides to investigate – learning all kinds of secrets about Candice, including that she lived a troubled private life and genuinely believed she was the reincarnation of Marilyn Monroe. Interesting. 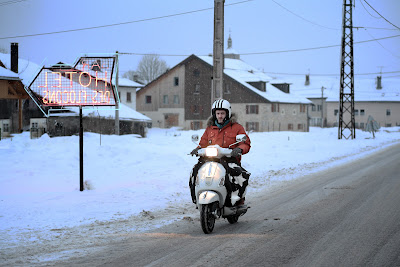 Nobody Else But You is a pretty standard crime mystery. The film takes a little while to get interesting, but the screenplay, which cleverly balances David and Candice’s stories, while ensuring the film remains entertaining, with well-placed moments of humour, and compelling. There are few moments of genuine suspense, but a viewer will enjoy putting the pieces of the puzzle together. The performances aren’t bad - Sophie Quinton is luminous as the Monroe-esqe weathergirl. Her ad for a local cheese company is nothing short of ridiculous, however. Rouve pulls off a writer well enough. There is a personal interest in that regard, and watching him suddenly get inspiration and race to his MacBook was certainly amusing.

The way that the links between Candice and Monroe emerge - she has platinum blonde hair, shares a June 1st birthday, is often very late to work and is bullied by her producer in much the same way that Monroe was by Sir Lawrence Olivier (if one accepts the recently released One Week With Marilyn to be accurate that is), and is the mistress of a powerful political figure (with initials JFB I might add). There is even a 'Happy Birthday, Mr. President'. Ultimately, she meets a similar demise as Marilyn did. Searching for a good story, David is the only one who considers foul play. Does he genuinely believe it, or has his wild imagination run away with him? Is he inventing a mystery for the sake of inspiration, or are the circumstances of here death suspicious?

David is an outsider snooping around where he shouldn’t be. As he breaks into Candice’s house and removes her journals, sneaks into the morgue to see her body, and pretends to be a relative to attend her funeral, he not only gets closer to finding out what happened to her but also begins to develop a sellable story. The clues are all in the journals – save the last one that is missing – and as he reads further, we learn more about Candice’s private problems and the people she surrounded herself with. Ultimately, the film just doesn’t leave a viewer with any memorable moments. One sequence featuring an out-of-control car on a wet road is probably the film’s slickest sequence. There isn’t really a twist, and instead of focusing on the mystery (I guess it just isn’t deep enough to warrant a feature) it throws in unnecessary tangents – the flighty receptionist who wants nothing more than to jump David’s bones, and the policeman who willingly assists David, despite pressure from his boss to remain uninvolved. There are suggestions that he is gay, but this reasoning makes no sense because his character just disappears in the end. 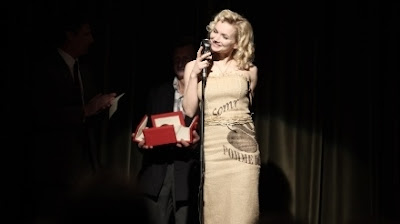 There are plenty of references to other directors here, and while the story is sound, it seems too aware of its ability to tie in Monroe facts to the story – and too in love with the climate. On the mystery level, I was reminded of the Dario Argento giallo genre, which usually focuses on an amateur sleuth hero (a writer/journalist, even a rock drummer in Four Lies on Grey Velvet) embroiled in a murder mystery, and the films of the Coen Bros (Fargo, notably). The way the film tracks David’s journey to Mouthe, a lone car on an icy road surrounded by plains of snow, also resembles the icy locales used in The Girl With the Dragon Tattoo. While there was plenty I liked about it, the film itself is cold. It never lures a viewer in, nor causes us to care much about the case, resulting in a disappointing and fairly forgettable whodunit.