A Man Escaped is the 1956 French film directed by the great Robert Bresson (Pickpocket, Au Hasard Balthazar). It is based on the memoirs of Andre Devigny, a prisoner of war who managed to escape from Fort Montluc prison in Lyon during World War II. The Nazis also imprisoned Bresson, himself a member of the French Resistance. The central protagonist of the film is named Fontaine, and played by Francois Leterrier. 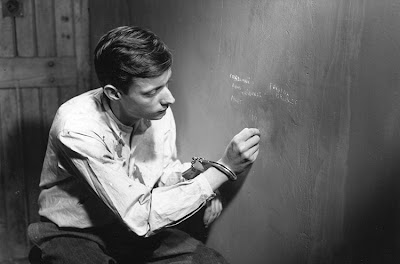 One of the film’s opening shots is of a plaque commemorating 7,000 men who died at Montluc prison at the hands of the Nazi’s – both through natural means, or through execution. Robert Bresson’s extraordinary film, above being a pinnacle in the prison escape genre, it is also a very powerful anti-war film. Fontaine, a member of the French Resistance, seizes an opportunity to escape his captors while being escorted by car to prison. He is eventually apprehended, handcuffed and placed in a cell on the first floor.

There he is able to communicate with men exercising in the prison yard, and he utilizes the means of one of them to send letters to his comrades. He is moved to Cell 107 on the top floor, and convinced that execution awaits him, begins to invent a method of escape. He spots weaknesses in the construction of his door, utilizes the items in his room to build make-shift tools, and learns the routine of the patrol guards, but is reluctant to commit to the escape, fearing the repercussions of capture and assassination. 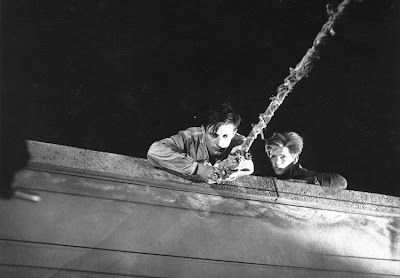 The Director’s Suite version of this film, released through Madmen Entertainment, is an excellent transfer. The black-and-white photography is stunning and the audio crisp. Technically, like Bresson’s other works, it is a work of art. Most important, I think, is the editing. The lengths of scenes vary according to the make up of each. If it only involves a brief hushed conversation between Fontaine and one of the other inmates, then the scene cuts to black and the story moves on. There is not a wasted second, and almost every sequence is heightened by tension.
The concluding escape sequences are tremendously intense. I found myself holding my breath every step of the way. The scale of their achievement (this is not giving anything away – the title of the film is ‘A Man Escaped’) and how impossible an escape would have been had Fontaine not brought along an accomplice, taken the time to build the appropriate tools and considered the architecture of the prison, the positioning of the guards and everything they had to conquest, is brilliantly relayed.
Trying to name Robert Bresson’s greatest film is a challenge, and so far I have only seen four. Though many credit Au Hasard Balthzar, there is a strong case for both A Man Escaped and Pickpocket, released a few years later. They are fine examples of the purest form of Bresson’s visual style and utilize many of the conventions that he became renowned for. These include a stripped-down-to-the-essentials method of storytelling, a direct focus of the camera only on the important features in the scene (a close-up of Fontaine’s face, or exclusively his hands as he chips away at his door), as well as the use of voice-over narration. Due to Fontaine’s isolation, his plans for the escape and how he builds his makeshift ropes and hooks are conveyed to us through his voice-over, which I assume closely resembles Devigny’s memoirs and is one of the great uses of voice-over I have ever seen. There is a piece by Mozart used at intervals throughout the film, but for the most part there is a complete absence of a score. 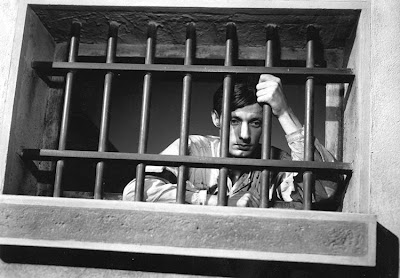 The film’s focus is purely on his escape. It follows every step – his procuring of a pin to release himself from the handcuffs, utilizing a sharpened spoon to chip away at the weak wood joining the panels on his door, his attempts to find an accomplice with the guts to escape with him, as well as dealing with his pending assassination for his resistance, threatened cell searches and a new cellmate (dressed in both French and German attire and potentially untrustworthy with knowledge of the plan) on the eve of his scheduled escape. The simplicity of the story, which isn’t bogged down by the stories of his fellow inmates, though we learn a little about them along the way, makes this film coherent and polished, and from my reading, a work of cinematic perfection.
Posted by Andy Buckle at 6:58 PM