Free Men, the second feature from writer-director Ismael Ferroukhi, is a wartime espionage thriller. It is inspired by true stories, though the characters and the events that transpire over the course of the film are fictional. In the closing credits, the film claims to be dedicated to unnamed Muslim agents who fought for the French Resistance during Nazi occupied France during WWII, aided in rescuing and protecting Jewish refugees and assassinated Gestapo informants. Though a little flat, there is some genuine tension, and is ultimately quite moving. 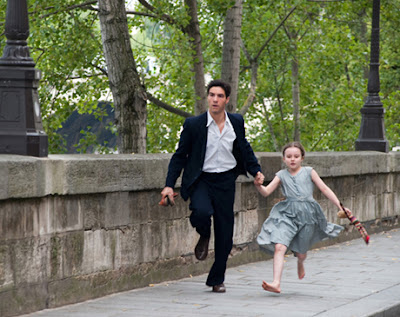 Free Men follows a young and illiterate Algerian immigrant, Younes (Tamar Rahim, A Prophet), who, after falling ill and losing his job at a factory, has turned to dealing goods on the black market. His cousin, Ali (Farid Larbi) is a member of a Resistance union, and urges Younes to participate. He declares to have no interest, and is first-and-foremost committed to making money for his family. When he is arrested – both for associating with known Resistance fighters and for possession of illegal goods, he is offered a reprieve, spying on the community residing and conspiring within the walls of the Mosque of Paris. The governor, Ben Ghabrit (Michael Lonsdale, Of Gods and Men), is suspected of harbouring Jews and providing them with false identification papers.

Younes, hardly subtle with his spying, reports back with general observations. On discovery that a sympathetic Ghabrit knows about his cover, and after he starts a friendship with a talented Jewish cabaret singer, Salim Hallali (Mahmoud Shalaby), who has been supplied a fake ID by Ghabrit, he begins to question his allegiances. He eventually joins the Resistance - running errands for his cousin, helping two orphaned Jewish children by bringing them to the Mosque for hiding, and later aids his colleagues in rescuing their leader from a hospital. While the film is short on action – save for a vehicular pursuit and a tense shootout between Younes and his colleagues and a determined Gestapo officer, it is compelling – thanks to the fine leading work from Rahim (a top screen presence) and reliable support from Lonsdale and Shalaby. It is unfortunate that Lubna Azabal (Incendies) is so underused. She is one of the Mosque staff. Saying very little, but capturing Younes’ affections, she is an Algerian liberator in hiding.
Younes’ transformation is the film’s driving force, and it is actually quite similar to his role in A Prophet. He is a go-between walking a dangerous line between both sides. He initially reports back to the Gestapo, but leaves out his knowledge that Salim is a Jew, but then tries desperately to warn Salim when he learns that they know the truth. The film’s best sequence is an incredibly moving one where a captured Salim is asked to prove, beyond his ID papers (believed to be fake), that he is Muslim. He leads his captors to a Muslim cemetery where his deceased father is ‘supposed’ to be buried. Though the tension isn’t built for as long, this scene resembles a similar one in the Coen Bros’ masterpiece, Miller’s Crossing.
I guess the story is a bit contrived in that Younes’ contact for his sellable wares also happens to be an informer for the Nazis, resulting in a convenient late twist that doesn’t generate much of a response. Still, I found this to be an interesting film. It is competently put together, realistically recreates the period, effectively establishes the tense atmosphere, and builds some strong characters that we can get behind. Recommended viewing at the 2012 Alliance Francaise French Film Festival.
Posted by Andy Buckle at 4:55 PM