Alliance Francaise French Film Festival Review: You Will Be My Son (Gilles Legrand, 2012)

You Will Be My Son has made its Australian Premiere at the 2012 Alliance Francaise French Film Festival, and it is gripping human drama that chronicles the tense relationship between a highly demanding father and owner of a prestigious vineyard in Saint-Emilion, Paul de Marseul (Niels Arestrup, excellent), and his son Martin (Lorant Deutsch), who works with him on the estate. 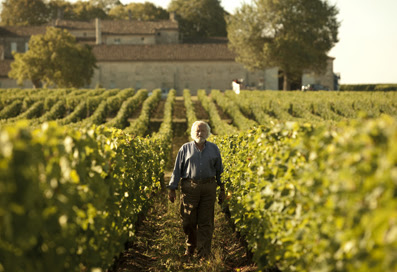 It is the third feature from director and co-writer (with Delphine DiVigan), Gilles Legrand, and displays an acute awareness to the context of the French winegrowing world – the handing down of knowledge and heritage and the maintenance of quality and tradition, ensuring that the business remains in the family - and the complexities of the father/son relationship, especially when it is placed under stress due to individual mean-spiritedness and family business interests. The extremes that Paul is willing to go to preserve the former, while completely ridding himself of a latter, makes for involved, contemplative and often angering viewing.
Martin is ambitious, educated, skilled with figures and technologically sound, and believes he is ready to take over the role of chief wine steward. Paul, however, is dismayed by the prospect of Martin taking over his vineyard, believing he lacks the old-fashioned instinct, a taste palate capable of differentiating between complex wines, the experience or the creativity to lead a harvest and the genuine passion for the role that he feels necessary to ensure the vineyard remains prestigious. He desires a son who is media-friendly and charismatic, and one closer to the son he envisioned to one day continue his legacy, as he had his own father’s.

He bullies and humiliates Martin, treating him with disrespect, impatience, and unfair principles. On one hand we understand him trying to teach Martin the ways of overseeing a vineyard and winery, but on the other, his lack of patience, and his incessant bullying doesn’t work as a moral support, but a toxic obstacle between their partnership. Paul seems to have given up on him long ago, and Martin is never given the chance to prove himself.
When Paul discovers a suitable successor in Philippe (Nicholas Bridet), the son of his long-time estate manager, Francois (Patrick Chesnais), who has recently been diagnosed with cancer and is unable to continue his role, he showers Philippe (who has found success running a winery in Los Angeles) with admiration, responsibility (assigning him the stand-in steward for the harvest, and asking him to accompany him to an award ceremony), praise and material gifts, while completely rejecting his own son in the process. This increase in tension on the estate – and it involves all four men, and their womenfolk (Martin and Francois’ concerned wives) – results in several tragedies that change the lives of everyone.
You Will Be My Son is carried by intelligent scripting, and excellent performances. Arestrup, who many will recognize from Un Prophet and War Horse, is the standout, crafting a despicable but completely captivating character, who stands as one of the most ruthless and cold-hearted businessmen since Daniel Day Lewis’ Daniel Plainview in There Will be Blood. I'm not placing it on the same page, but their stories do share similarities, especially in Plainview’s disgust at his son’s uselessness following his injury (Martin was born six weeks early and weak, and took years to overcome a stutter) and his heartbreaking confession that H.W is no son of his, and nothing but a ‘bastard from a basket’. Martin is treated the same, and Paul, on several occasions, claims to prefer the simple complexities of wine to the people, frustrated by their ability to disappoint him. When Paul offers Philippe a position as his co-partner and eventual successor, he all-but dismisses Martin as his own blood.
The film raises several complex questions, asking an audience to consider, for example, how a son would react to the knowledge that his father doesn’t love him or how a father would react to his own son defying his advice, having been blinded by opportunity and power. The concoction of thought-provoking themes push this film, which I think lays on Paul’s cruelty a bit too thick at times, and dismisses some loose threads with convenient resolutions, into a region of high-quality drama. Quick final mention to the excellent use of score and accompanying music. It set the tone for the film early (and I actually thought it was going to be a thriller) and really worked for me personally.
So far, the films I have seen at this year's Festival have not been particularly strong. You Will Be My Son is the most impressive yet. As a gripping character study it works well - Paul is a horrible human being, yet he is a man whose ruthlessness brings him much success - and it is as effective as Sideways in inspiring a viewer to savour a bottle of fine wine. This is a film that will generate some strong word-of-mouth, I imagine, and it is one I can label with a recommendation.
Posted by Andy Buckle at 11:54 PM