Based on the first in the trio of Suzanne Collins’ immensely popular science-fiction novels, the highly anticipated cinematic release of The Hunger Games is now upon us. Gary Ross (Seabiscuit, Pleasantville) directs the film and co-wrote the screenplay with Suzanne Collins and Billy Ray.

I will start by providing a disclaimer – I have not read any of The Hunger Games novels, but prior to this screening I was aware of their premise. My reaction here is to the film, and only in part a comparison to my slim knowledge about the novels. 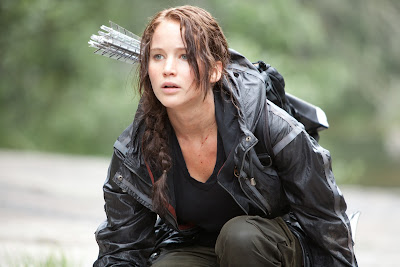 After the existing nation of North America is destroyed by catastrophe, Panem, a now heavily divided civilization, has risen from the ruins. Panem is ruled by the wealthy Capitol, a thriving metropolis surrounded by 12 Districts, who are now at the mercy of the Capitol after an unsuccessful uprising over 70 years prior. As a result, their punishment is to select a male and female tribute from their District (children between the ages of 12-18) to take part in an annually televised contest called ‘The Hunger Games’, which takes place within a constructed arena with the designers able to influence the game from a control station. There are hidden cameras located throughout, which broadcast the action. There are 24 contestants – and they must fight to the death until there is a lone surviving victor.
Immediately, we are introduced to 16-year-old Katniss Everdeen (Jennifer Lawrence) on the morning of the reaping for the Games. She is sneaking off outside the borders of District 12 to hunt for her family. Just as effectively as Katniss’ character is set up in these early scenes, the immense poverty of her District is conveyed. They are in desperate times, having never bred a winner of the Games, and as a result never been fulfilled by the spoils of victory.
We are also introduced to Katniss’ friend Gale Hawthorne (Liam Hemsworth), whose father had died in the same mine as hers several years prior, and her younger sister Primrose (Willow Shields). Later, at the reaping, Primrose is selected to compete, but Katniss, ever protective of her sister (who would surely never survive) volunteers to compete in her place. The male tribute is Peeta Mellark (Josh Hutcherson) – and they journey together to the spectacular realm of the Capitol, where they meet a host of colourful characters and prepare for the fight of their lives. They train alongside the other tributes, get dolled up for interviews aired before all of Panem and dine and sleep in style.

If it wasn’t already proven in her Oscar-nominated performance in Winter’s Bone, and her strong work last year in X-Men: First Class, Jennifer Lawrence is a hell of an actress – and she is fantastic here, carrying the weight of the film adequately on her shoulders. The novel is from the POV of Katniss, with a lot of the film's theme generated through her individual thoughts. This is quite difficult for the film to recreate. Just as she comes to terms with what is required of her prior to the Game and the tactics she will need to incorporate to have a chance, and experiences the immense spectacle of the Capitol, we as the audience are right there alongside her. Lawrence is very convincing and has helped craft one of the finest screen heroines I have seen in an action blockbuster. 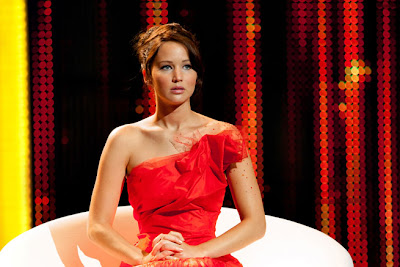 Ross makes great use of the close-up early, and our connection with Katniss is close and intimate. We know who the heroine is, and we really like her. Lawrence’s character is actually a bit like her character in Winter’s Bone. She is smart, strong-willed, resourceful, and she takes care of her younger sister since her mother stopped being a reliable parent. We also know that she will be an honourable contestant, but has her work cut out against some of the other tributes, who have volunteered for the Games having been especially trained from a young age.
Taking this into account, as well as the fairness of pitting a 12-year-old girl and an 18-year-old boy together, this source of entertainment is truly barbaric. Katniss, throughout the Games, makes decisions to show up the exploitation of classism and youth for the sake of continued intimidation - and the President (played by a heavily bearded Donald Sutherland) declares at one point that there is a crowned winner purely to maintain a slim level of hope for the Districts. Though these politics, and the implications of Katniss' actions aren't as effectively conveyed as could have been, the filmmakers still do a great job of conveying Katniss' thoughts through other means, and it sure makes for a stirring story. 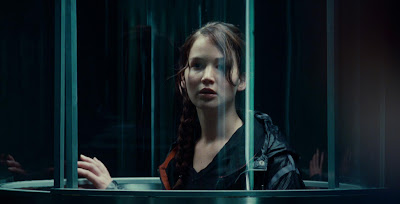 The rest of the cast is also strong. Among the colourful characters that Katniss and Peeta meet are Haymitch Abernathy (Woody Harrelson), an eccentric former winner who mentors the pair, Cinna (Lenny Kravitz), who helps them with their costume choices and working with Haymitch to ensure they know all they can about winning over the Game Sponsors, Caesar Flickerman (Stanley Tucci), one of the flamboyant commentators and the host of the televised program, and Seneca Crane (Wes Bentley, sporting an awesome beard), the creator of the ever-changing Game world. All are well cast, but the charisma of Harrelson and Tucci make their characters the most memorable. I would have liked more commentary from the latter, especially during the quieter game moments. He and his colleague (played by a little-used Toby Jones) could have speculated on Katniss’s decisions, and helped to explain slightly more effectively her thoughts and motivations.

The film's set-up is phenomenal, and for a film that stretches to 142 minutes, it certainly doesn't feel that long. The knowledge that the Games are approaching is an excellent driving force - and the film very effectively blends elements of sci-fi dystopia, horror, coming-of-age, and even humour. Ross makes some great directorial choices here – managing to effectively utilize visual effects to capture the awe-inspiring beauty of the Capitol, while the elaborate set pieces, costumes and cosmetic get-ups of the residents and the mechanics of the Game are very impressive indeed. In his attempts to plunge the viewer into the grimy world of District 12, and the tension of the Game, he resorts to using hand-held, and this is less effective. 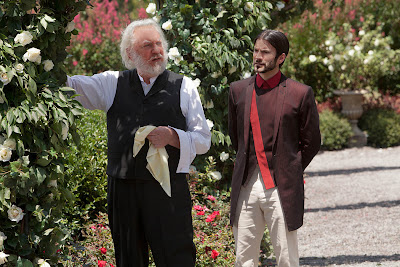 The Games themselves are actually quite intense, and there are some terrifying moments for Katniss. Due to censorship constraints - an MA rating would have eliminated a chunk of the target audience – there had to be some thought regarding the on-screen violence. The impact of some of the deaths is lessened, and the use of the hand-held makes it easy to capture the violence, but not actually show us anything. One of the key criticisms I have with the film is the use of the hand-held in combat mode. Yes, we are situated with Katniss for the entirety, but just because she is running and rolling around on the ground, doesn’t mean the camera has to get lost in it all. This was disappointing. Still, the tension is maintained, and the implications of the violence still manages to leave an impact.
On some levels it also seemed like prior knowledge (ie. having read the novel) was required to fill in the background. I had some questions at the end that I was assured by my friend were answered by novel. I don't think this is an observation that should be considered too seriously, however, because the film is by no means confusing. One example of this is Katniss’ attraction to Peeta, which is very ambiguously left for the audience, and seems like it will play a larger role in the second instalment. Carried by an outstanding performance from Jennifer Lawrence, this exciting adaptation is sure to thrill fans of the novels, and even prove to be entertaining for the few people like me who have not read them. I was sitting in the theatre the other day and there was an announcement in the pre-trailers calling The Hunger Games the 'next Twilight'. I dismissed that claim then, and I dismiss it now. It most certainly is not.