The Yellow Sea is a Korean action-thriller written and directed by Na Hong-Jin (The Chaser), which has screened in the Un Certain Regard at the 2011 Cannes Film Festival, and at the Fantastic Asian Film Festival (FAFF) in Melbourne last year. I was lucky to attend a Sydney Premiere session of the film the other night at the Korean Cultural Office as part of their fantastic X-treme Korea program. 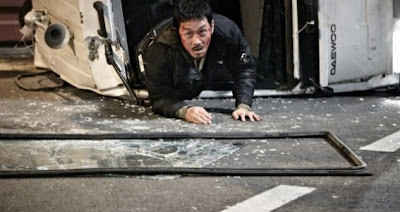 In Yabian, Korean Autonomous Prefecture, a town on the China-Russia-North Korea border, Cu-Nam (Ha Jung-woo), a Joseonjok (what I took to be a derogatory term to describe Chinese people of Korean descent) lives day to day as a taxi driver. He frequents at seedy gambling rackets, accumulating a substantial mah-jong debt, and drinks frequently. His wife has recently left him to work in South Korea. Fearing she is having an affair, and disturbed by her lack of contact, he agrees to a job that will take him illegally across the border into South Korea with an opportunity to find her, but also provide a means to appease his debts. The job: the assassination of a businessman.
He is given expenses, and has just 10 days to complete the job before his paid transportation back to China leaves. He divides his time between scoping out the target and searching for his wife, distracted by her further disappearance – but when he attempts the hit, his careful plans go horribly wrong and he finds himself on the run not just from the police, but the entire South Korean Mafia, and the Chinese contact, Myung-Ga (Yun Seok Kim), who supplied the mission. The way these various parties cross paths makes for an intense cat-and-mouse thriller, which transforms Cu-Nam into a desperate fugitive fighting to stay alive and uncover who is responsible.

I felt like the film’s build up – slowly unveiling Cu-Nam’s motivations in taking the job, observing him as he naively and tentatively scopes out his target and plans the hit, and the initial repercussions of the mission going wrong – is very well done. Then The Yellow Sea takes a sharp turn and becomes a frenzied action film full of grisly, stomach churning violence, and for a significant stretch, this was fantastic too. It is unfortunate that the film’s final quarter (the film is divided into four chapters by title cards that document Cu-Nam’s journey), becomes a bit of a mess, and is ultimately a let down. There is plenty of depth to the story, because it delves into the mechanics of the Korean criminal underworld, and deals with the destiny of an emasculated social outcast, who will stop at nothing to defend his life, given the extremity of his situation. Though he has very little to lose, he clings to the hope that he will see his wife again, and take down those responsible. 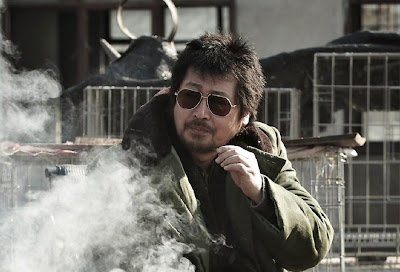 The fine set pieces are consistently exciting, and the screenplay (and the fine performances) work humour into the thrills very well. It is just a pity that many questions were left unanswered, and there seemed to be no point to the narrative’s lack of clarity. I felt like the screenplay overcomplicated itself in the conclusion. Having introduced too many characters with cloudy involvement and unclear motivations, as well as trying to resolve not jus the central mystery, but also the subplot involving Cu-Nam’s missing wife, it was ultimately far too long, and actually became a tad gruelling. Never was the film void of tension, but it required a lot of work to piece it all together after the action bombardment. It is unfortunate that the most confusing elements of the story take place just following one of the film’s most thrilling scenes when we are still trying to catch our breath.
The scene in question is an excellent chase sequence, which sees Cu-Nam being pursued by Myung Ga and his many henchmen. Carrying just a hatchet, Cu-Nam fights off the wave of pursuers, at one point hacking wildly at their hands as they attempt to pry open a door he has forcibly tried to shut, taking several hits to the back and limbs in the process, and leading them on a pursuit across the docks and culminating in an exciting, but ultimately destructive vehicular chase. The film, in the second half, shifts to two other characters, Myung-Ga, who has come to Korea to clean up Cu-Nam’s mess, and the head of the Korean Mafia (Seong-Ha Cho), whose acquaintance with the victim places him directly within the mess, sending his associates after Myung-Ga, who he believes is responsible. Myung-Ga becomes the most compelling character, and Yun Seok Kim is astoundingly good – infusing his character with menace and humour – but he is caught in the middle as both the hunter and the hunted.

The Yellow Sea has plenty of emotional punch, and on a visceral level the blood runs thick and frequently. There is plenty of energy behind the camera – and Na Hong-Jin is evidently a talented filmmaker. It is a shame the screenplay is not tighter, because by layering the story with subplots and this many characters, there are a lot of holes. Future viewings might seal these up, but it was a considerable let down, considering how fantastic the high-octane action is.
The Yellow Sea is set to have a DVD release in the near future through Monster Pictures. If you can stomach violence, and wish to see a film in the vein of Oldboy or I Saw the Devil, two other crazy Korean films to hit cinemas in the last decade, then The Yellow Sea is certainly not one to miss.
My Rating: ★★★1/2 (B)
Posted by Andy Buckle at 9:34 PM