One of the chief desires for humans is to maintain a level of civility with one another. When irreconcilable differences between people emerge, civility and inhibition is abolished, and carnage ensues. In Roman Polanski's newest film Carnage, which premiered at the 68th Venice Film Festival and is based on the Yasmina Reza play, God of Carnage, two very different couples meet to discuss an altercation between their sons in a park, resulting in the complete breakdown of social order. Due to Polanski's fugitive status, the film was shot in Paris, despite being set in New York City. 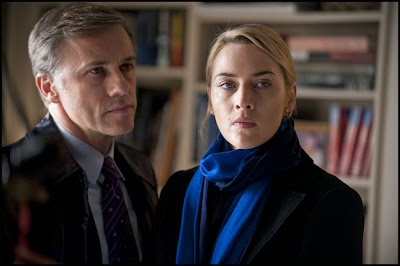 One of the boys, following an argument, hits the other in the mouth a stick (and we see this during the opening credits). Alan and Nancy Cowan (Christoph Waltz and Kate Winslet), the parents of the boy with the stick, visit the Brooklyn apartment of Michael and Penelope Longstreet (John C. Reilly and Jodie Foster) to discuss the matter and an appropriate course of reconciliation and potential compensation. What first begins as a civilised discussion of the event, modes of parenting and other such trivial matters, becomes much more when the Longstreet's challenge the Cowan's unperturbed attitude and the Cowan's question the innocence of the Longstreet's son when they learn he was verbally abusive to begin with and was accompanied by his gang. Class difference, opposing perspective, rising tension, and other interruptive circumstances, push what was initially supposed to be a brief conference, into a lengthy interrogation of socially relevant ideologies, and ultimately, full-on verbal warfare between the four.

The success of the film, due to taking place within the claustrophobic confines of one room (the hall outside the apartment, and an adjoining kitchen and bathroom are briefly used), and fueled by heated exchanges of dialogue, rests on the strength of the performances. Polanski has brought in some well-suited Hollywood big names and they are all, as expected, excellent. Winslet and Foster were nominated for their performances at the 2012 Golden Globes, but it is Waltz, playing the only character that doesn’t put on a façade for the sake of the meeting, who was the standout for me. In short, he was as hilarious as his breakthrough in Inglourious Basterds. Though amusingly content to snob his class of company and lounge around on their furniture, remain indifferent to his son’s action, and indulges in constant telecommunication with his work colleagues over an important legal case (often reacting to the distraction mid sentence), he becomes the character we ultimately cling to as the others unravel around him. 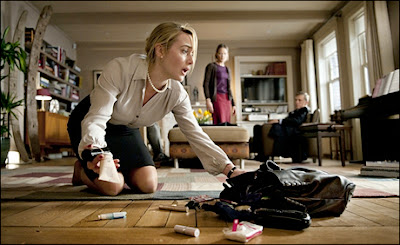 I don’t think I have ever seen Kate Winslet give a weak performance and hers is especially memorable – clearly not reacting well to increased stress, the Longstreet’s pear and apple cobbler or scotch. Jodie Foster gives a surprisingly aggravating turn, and perhaps covers the most range. Some may claim she overacts in the latter half, though it isn’t really distracting. Initially, it seemed obvious that John C. Reilly was the weakest of the four, but as we learn more about his character, his overly cheerful exterior is not the result of a forced performance by Reilly, but is an integral part of the evolvement of his character.
As the true colours of the characters are revealed – Michael’s short temper, non-Liberal ideologies (including his choice of clothing for the day), hatred for rodents and pride in once leading his own gang overthrow his formerly charming veneer. Penelope, of the strong belief in causes, and ensuring that civility is upheld in every cultural avenue, fails to accept the indifference of the others about her son’s ‘disfigurement’, while Nancy, the catalyst for the meeting and the one continually trying to reach some sort of agreement, is a wreck, drowning her well-dressed, prim-and-proper demeanour in several glasses of scotch. Alan, a selfish prick from the beginning (and never trying to hide it), amuses himself by helping himself to huge portions of cobbler, stirring up Penelope about Africa's political trouble, challenging Michael by discrediting his profession and observing their gradual descent into embitterment. 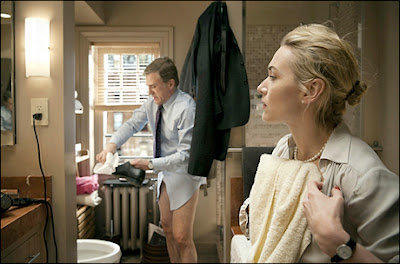 Michael and Allan briefly bond over scotch and cigars (and the correct term used to describe ‘flamethrowers’) as their wives openly criticize them – while Penelope and Nancy awkwardly converse about art to break the ice, but ultimately share hysterical laughter when Alan’s cell phone takes a bath. The changes in character are extraordinary, often coming out of nowhere. It might sound dull and irritating to watch four people argue in the same room for over an hour (and it doesn’t break the hour mark by much – a concise 79 minutes), but with material as sharp as this, and dialogue as brilliantly delivered, there is never a dull moment.
Initially, keeping the four characters within the confines of the apartment felt forced (with Nancy and Allen actually making it into the lift at one point) and though I haven’t seen The Discreet Charm of the Bourgeois, it seems like it might be an influence on the play. In that film, a group of partygoers try to leave a party, but for some reason are incapable of doing so. Here a couple tries to escape an obligation, but are continually lured back to argue their credibility. All of the characters are extremely unlikable in their own way, but as an observer, and it is a privilege to be in the room during this abnormally hostile meeting, they are fascinating to watch. Carnage, another winner from Polanski, is a brilliant comedy of manners.