First and foremost, I didn’t think a big-budget film with such an endless array of action set pieces and visual spectacle could be as boring as Clash of the Titans, which was one of the worst films released in 2009, and probably still the worst post-conversion to 3D to date. That film, which had Sam Worthington try and pull off an American accent, fail, and then ultimately just give up, Liam Neeson cocooned in a cloak of blinding light, and one of the most episodic and dull screenplays in existence, had to be bettered. It was bettered in Wrath of the Titans, but only just. Jonathan Liebesman (Battle L.A) is the dubious selection to helm this sequel, and though the visual effects are vastly improved, the viewer’s investment here is severely hampered by the script, and Wrath of the Titans, like its predecessor, has an atrocious one. 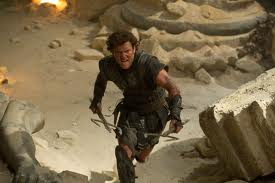 The film picks up about a decade after Perseus’ (Worthington) now legendary defeat of the Kraken, and rather than take advantage of his lineage, he has decided to live the quiet life of a fisherman, and take care of his 10-year-old son, Helius. Weakened by humanity’s devotion to the Gods, they are losing control of the imprisoned Titans led by Kronos: the powerful father of Zeus (Liam Neeson), Hades (Ralph Fiennes), and Poseidon (Danny Huston), who they had overthrown and banished to Tartarus, a dungeon buried deep within the Underworld.
Hades and Ares (Edgar Ramirez), Poseidon’s son, make a deal with Kronos to capture and imprison Zeus, and by draining his power enhance the strength of the Titans, who are then unleashed on the unsuspecting world. Perseus cannot ignore his father’s need for his help, rounding up a band of cohorts including Queen Andromeda (Rosamund Pike), Agenor (Toby Kebbell), Poseidon’s demigod son, and Hephaestus (Bill Nighy), a fallen God who designed Tartarus, in a desperate attempt to save mankind.
There are actually a few positives to note here. The inclusion of a better supporting cast meant that there are a few interesting characters. There is a strong female character (at least in principle) in Andromeda, but one has to wonder why Rosamund Pike, excellent in Barney’s Version and An Education, would take on this role. Bill Nighy (the man is in everything) and Toby Kebbell actually provide some honest laughs, rather than those coming unintentionally from the unbelievably corny dialogue or one glance at Sam Worthington’s bad hair day. Also, Zeus and Hades’ character arcs are better rounded and almost draw some invested interest this time. 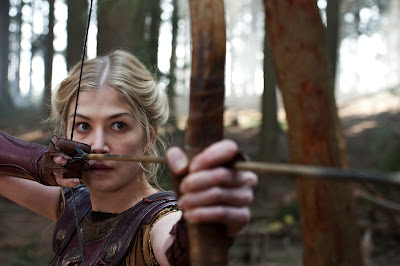 Then there is Sam, who is just about impossible to take seriously in this film. It feels like an Aussie surfer dude has been dropped into the world of the Gods, and is desperately trying to fit in. He tries hard; we’ll give him that, delivering ‘every’ line with a grumbling (and often unclear) overtone of malice. It matters little that he speaks with a thick Australian accent for the duration because there are more than a handful of accents on display in this film. Though not particularly distracting, it is very odd.
The 3D is certainly better than in Clash and it would want to be considering the film was actually shot in 3D and not converted later. For the most part, however, the 3D might not have been there, and save for a few occasions where the depth created by the technology looked cool (Tartarus’ labyrinth, the rise of Kronos), it was pretty unnecessary. The film’s darkness – half of the film takes place in the depths of the underworld – and the fact that the action sequences are horrendously shot (making the mayhem and fairly epic confrontations, near indistinguishable), overwhelms some of the great visual effects work. 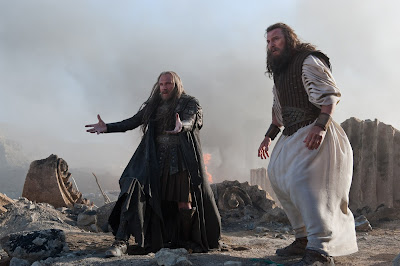 But as I said before, it is the screenplay where this beast suffers. Almost immediately, a viewer is bored by the story, and in between the action sequences (realistically, these are the only reason people want to see these films anyway) the dialogic exchanges are so dull that it is easy for one to drift off and think of other things. You will lose count of how many times the words ‘father’, ‘brother’ and ‘son’ are present in the dialogue. As much as the film is marketed to be about a battle between Gods and Titans, it is more about the mending of familial relationships – Persues and Zeus, Zeus and Hades etc.
Then, during the action sequences, there is so much to absorb - the hyperactive camera, the explosions of red and orange, the rapid editing - that if there is no invested interest in the characters or the story’s outcome (and there isn’t) the effort to process it all just isn’t there. Overall, Wrath of the Titans is an improvement over Clash of the Titans, but it is the same episodic conglomeration of myths with flashes of inventiveness and impressive visuals, but ultimately a bore of epic proportions.
My Rating: ★ (D)
Posted by Andy Buckle at 11:48 PM