The Raid is scheduled for a release in Australian cinemas on March 22.

If you are a die-hard action fan, get an adrenalin rush from loud, violent shoot-em-ups and extremely intense, expertly choreographed hand-to-hand skirmishes (or machete-to-knife as it is on some occasions), displaying an incredible array of martial arts maneuvers, and aren’t squeamish, then The Raid is a film you can’t miss. If this isn't you, perhaps it is a good idea to steer clear of The Raid. It is rather violent. Nevertheless, it is impossible to dismiss the film as anything but a new pinnacle of the action genre. The soon-to-be-infamous Indonesian film from Welsh director Gareth Evans, who also wrote and edited, will raise the heart rate, cause your draw to drop in awe and seriously blow your mind. The Raid is being hailed as one of the best action films to hit cinemas in years, and this is the truth. I can’t think of a film that contains action so hard-hitting and convincing, nor one so intelligently filmed. 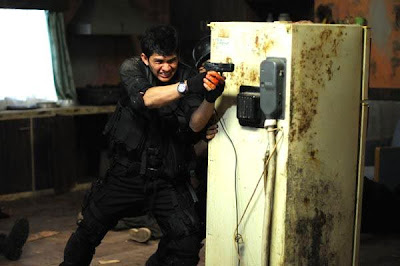 Deep in the heart of Jakarta’s slums lies an impenetrable derelict apartment building, which has become a safe house and fortress from some of the world’s most dangerous killers, drug lords and gangsters. Cloaked under the cover of pre-dawn darkness, a squad of elite operatives is tasked with raiding the block and take down the notorious ruler, Tama (Ray Sahetaby), who runs the show from the 15th floor. When news of the raid is brought to his attention by spotters on the lower floors, the power is cut, the exits are sealed, and the hostile and bloodthirsty tenants are given free reign to take out the dwindling squad. Rookie agent Rama (Iko Uwais), takes it upon himself to help his wounded colleague find safety, and then tries to rendezvous with the unit chief, who has been separated. Joining up with a couple of unlikely allies, he attempts to both complete the mission and escape the building, as waves of the world’s worst criminals, including Tama’s seemingly indestructible bodyguard Mad Dog (Yayan Ruhian), bear down on him.


So many action films depict similar skirmishes, but they are edited together with such haphazard speed, and use predominantly hand-held, often making the fights near impossible to make sense of. There is no problem of that here. Also, the violence is very convincing, with Evans obviously bringing in some of the world's finest martial arts actors, while the make-up and effects team have done a stellar job. The camera remains steady, captures every blow clearly within the frame, and rather than editing like crazy, Evans allows the camera to linger on the scene, situating the audience within the chaos and as a result making the brutal take-downs more realistic than one can believe to be possible. It is extraordinary, and there are times when you want to avert your eyes, expecting and fearing something extremely grotesque to take place, but find your eyes are glued to the screen.

The film’s only weakness is the fact that there isn't much of a story. But, to place this elite squad within the walls of this building, and justify why they are met by an endless swarm of hostiles, is all that is really necessary to engage a viewer. All that needs to be established is that Tama and his closest associates are men to be feared, and they are both terrifying and a joy to watch (often very funny) and that Rama, a family man in peak physical fitness, is the guy we root for. There is an early concern that Rama is going to be the ‘rookie on his first assignment embroiled in a life-and-death situation’, but that trope is abolished, because Rama, apart from being treated by his fellow team members like a rookie, really isn’t one. His unbelievable take downs, utilizing anything at his disposal and making clever use of his often-confined surroundings, don’t feel improbable, but genuinely acceptable. 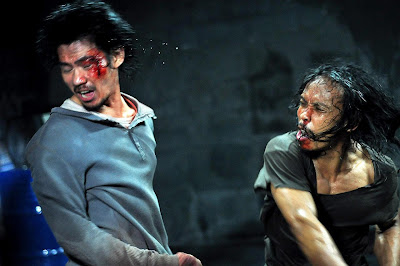 While the action sequences might come across as being overly loud and ultimately monotonous - and a couple of them are a little long – they continue to leave a viewer in awe because they are so unbelievably well choreographed, and rely on chance and unpredictability to enhance the tension. There is one sequence where Rama throws one of his assailants through a door, leaving a splintered surrounding frame. Later in the scuffle, those splinters are utilized to take down another opponent, but this action appears to be a natural improvisation by Uwais. In fact, after the pretty early realization that this isn’t just another action film, an audience might find themselves craving more action, and desire the film to progress quickly through the lulls. It takes a while to process how extraordinary the choreography is, because their maneuvers are so fast, but the technical work – the marvelous inventiveness with the camera, the editing restraint, and the fantastic accompanying score - makes this much easier to decipher than expected.
There are actually some good twists in the story that up that stakes and the suspense, and ask us to consider both sides of the fight and weigh up the established heroes and villains, while Iko Uwais will be no doubt be the unrivalled action hero of 2012. I am writing this a little more than 24 hours after the screening, and I am still buzzing from the experience. You will feel like you have also been trapped inside the building, and it is an exhilarating feeling. I loved The Raid and it definitely deserves a mention amongst the all-time action greats.
My Rating: ★★★★1/2 (A-)
Posted by Andy Buckle at 7:12 PM