I watched Night of the Hunter as part of my 2012 Blind Spot Series. Here is a quick overview of my thoughts.

The Night of the Hunter, directed by Charles Laughton in what is considered to be one of the greatest films ever made by a first-time director (it is hard to top Orson Welles’ Citizen Kane), is a sinister blend of Gothic horror, macabre fairy tale and film noir. 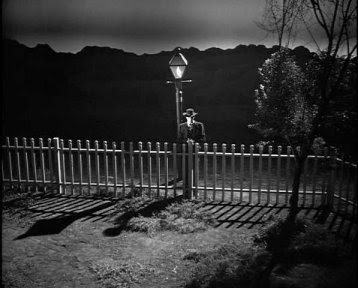 Ben Harper (Peter Graves) is in prison awaiting execution for murder. His cellmate, Reverend Harry Powell (Robert Mitchum), tries unsuccessfully to persuade him to reveal where he stashed the $10, 000 dollars he pulled from the crime. Overhearing Harper in his sleep mention his children, and convinced that it must be stashed somewhere at Ben’s home, he makes his way there upon release. Evidently a madman, he utilizes his oily charm to seduce Ben’s newly widowed wife, Willa (Shelley Winters). He marries her in the hopes that he will some day learn about the money – not out of love – and he soon makes his intentions clear by continually interrogating Willa and her two young children, John and Pearl, about the whereabouts.

He doesn’t realize that the children are the only two with this knowledge, and when he does, his pursuit of the children across the Depression-battered South is truly terrifying. Powell, maintaining his charming demeanor around the locals, transforms into the murderous misogynist he has kept repressed and starts an undeterred hunt for the children and his long-desired riches. He meets his match in Laughton’s symbol of holy good, a kindly spinster named Miss Cooper (Lillian Gish), who takes in the children and safeguards them from the relentless Powell. It is the perfect biblical transcendence of good over evil.
The beautiful black-and-white cinematography is highly stylized; adopting conventions mastered in some of the early Gothic masterpieces, but also influencing how many later horror thrillers films would utilize style and mood to create a surreal atmosphere. The reveal of Shelley Winters at the bottom of the river is one such extraordinary image – her hair rippling around her face from the current. The images take on an ethereal dream-like (well, nightmare) quality with wonderful use of shadow and silhouette, and the narrative is told as if it is a children’s fable. 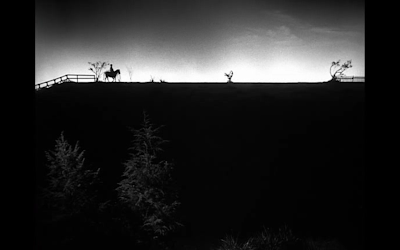 It is also great to see Lillian Gish play a significant role in the second half. She is one of silent cinema’s greatest actresses, working with D.W Griffith in classics like Birth of a Nation and Broken Blossoms – and her work here is phenomenal.
But it is Robert Mitchum who is the star of the film, crafting one of cinema’s most terrifying villains. Convincing with his charm, we gradually see Willa and the children fall under his charismatic spell, and even when the townsfolk learn that Willa is missing, they still don’t suspect that Powell has anything to do with it, his guise is so convincing. With LOVE and HATE tattooed across his knuckles, displaying unexpected violent bursts of anger, and with his hulking frame terrorizing the children, he is the figure of nightmares – exactly as intended by Charles Laughton, whose unconventional, but now legendary artistic triumph, was his one and only work as director before his death in 1962. It has taken me a long time to watch Night of the Hunter, but it is every bit as chilling as I imagine it was back in 1955.
Posted by Andy Buckle at 10:47 AM