Le Havre is an odd film, and feels like it has been pulled out of a completely different era. It is certainly different from most films you will see released these days, anyway. It is gentle and whimsical - an amiable and gracious character study that proficiently examines all of humanity’s benevolent considerations to one another. The simple story chronicles the righteous path of a unique Le Havre citizen, who aids another who is in desperate need of assistance. 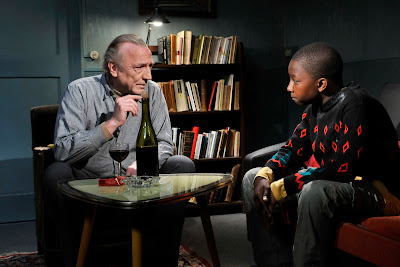 Once a bohemian and an author whose career never took off, Marcel Marx (Andre Wilms) has relocated to the port town of Le Havre. Despite his age, he is a humble man disinterested in remaining idle, but takes pride in providing for his wife, Arletty (Kati Outlinen). He has a simple profession - as a shoe-shiner – has a group of close friends and acquaintances, and fills in his time by walking his dog, and visiting his local pub for a glass of wine.
When his wife falls ill and is hospitalised and an underage illegail immigrant, Idrissa (Blondin Miguel), wanted by the local detective Monet (Jean-Pierre Darroussin), crosses his path, he decides to help the boy find a way to London where his mother had previously relocated. He at first brings the boy a sandwich and water and then decides to hide him from the authorities in his home. Reciprocating Marcel’s generosity, Idrissa prepares dinner and completes chores, while Marcel, enlisting the help of the friendly townsfolk, searches for information on the boy’s family, and tries to come up with the funds necessary to pay for his immigration to London. 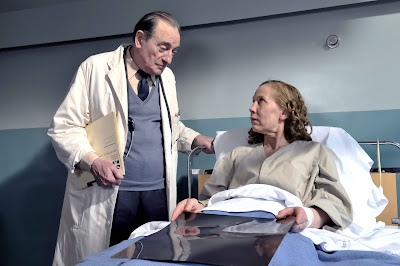 Le Havre moves slowly and requires patience, taking the time to establish who Marcel is and his relationships with the colourful characters – amongst them a greengrocer, a baker, a bar owner, a migrant shoeshine colleague, a sympathetic detective and an aging rock star – who cross Marcel’s path throughout the film. The film has also very admirable themes; taking pride in one’s existence, and conveying that if you respect and are kind to the people who surround you, your kindness will be reciprocated in the future.
Technically, Le Havre has plenty of grace. The film’s simplicity, and the clean, stripped mise-en-scene make its appearance resemble a children’s fantasy. Though some viewers have recognized the influence of Marcel Carne, I found Robert Bresson and Jacques Tati to be the primary influences. The editing is well controlled, and makes great use of what is implied, but not shown. While the low-key acting, which is almost completely stripped of visible emotion, and the use of only what is essential within the scene, remind me the most of Bresson. I really liked Wilms' performance and some may recognize Jean-Pierre Leud (a frequent collaborator with Godard and Truffaut) in a couple of sequences. 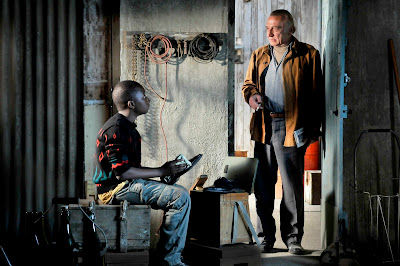 The story is perhaps a tad too slight, with the tension of their situations and the emotional impact that this bizarre series of events has on these people, did not resonate with me as long as I expected following the screening. The unique style is also unlikely to appeal to viewers unacquainted with this old-fashioned stripped-to-the-essentials mode of filmmaking, and lacking the desired patience.
But, every now and then a film comes along, sentimental and desiring nothing more than to rekindle your faith in human kindness, which brings a smile to your face and makes you feel warm inside. This is one such film. Kaurismaki, acknowledging his inspirations, and stepping out of his native Finland, has crafted a gentle, inoffensive film that is rich with humanism and capturing the tranquility of one of France’s most picturesque ports.
My Rating: ★★★★ (B)
Posted by Andy Buckle at 2:17 PM