Haywire, the new film from Steven Soderbergh (Traffic, Ocean’s Eleven and Contagion), who has been a busy man since announcing his retirement from filmmaking, feels like one of his experimental films – this time tackling the spy thriller/action genre for the first time. The screenplay is taut and lean, but lacklustre in the fact that it is often void of point or coherence, has an unsatisfying conclusion, and is often unable to maintain an audience’s engagement when the screen isn’t occupied by a chase or a fight sequence. 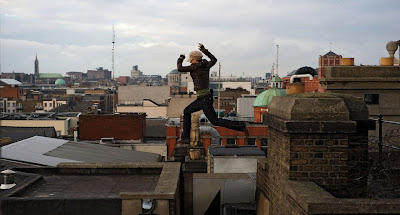 Still, Haywire is a very cool film, and has lots of Soderbergh’s recognisable traits. The non-linear, montage-style narrative structure, informing us how an event came to happen after the fact and the large ensemble cast of A-list Hollywood actors. The clean and inventive digital photography (and Soderbergh shot and edited Haywire himself), with Soderbergh’s usual array of filters, and the funky soundtrack from David Holmes (who also scored the Ocean’s films) greatly enhance the film’s often-stagnant energy. This is a film with plenty of visual style, but unfortunately not much holding the fantastic action sequences together. To a degree, this is forgivable.

Haywire focuses on Malory Kane (Gina Carano), a special agent who works for private contractors, completing reconnaissance missions with other international agents around the world. We are introduced to her when she arrives at a diner awaiting a former colleague of hers. It seems like she has been off the grid for a while. Turns out she is a wanted woman - and as the film develops, we learn that it is following a pair of missions, one in Barcelona and one in Dublin, where she has been set up for the murder of a journalist. Learning this, she goes on the run, trying to evade the highly skilled combatants that pursue her, discovering who is behind the double-cross, and ensuring they are held responsible. 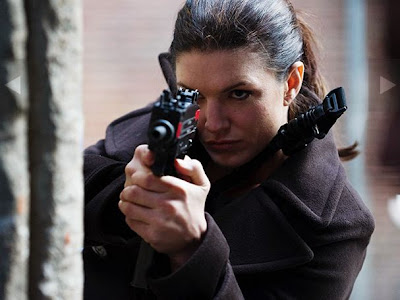 The film’s cast is one of the most puzzling elements of the film. The physical capabilities of Gina Carano, a now-retired MMA fighter who does all her own stunts in the film, ensure that the fight sequences are convincing. They are made even more convincing by the way Soderbergh captures them – in an often lengthy stationary shot making the struggle easily discernible, without an accompanying score, and not exaggerated by incredible manoeuvres by the actors. We know Malory is an ass-kicker, and in her desperation to evade her pursuers, her takedowns often require skilful grappling moves and messy flings around the room. They aren’t glamorous takedowns, but ones where we see both combatants desperate to gain the advantage and avoid compromising positions.
The best sequence is the one involving Carano and Michael Fassbender (who adds his charisma to yet another film) in the Dublin hotel room they are staying. While we get wind of what is sure to happen, the fact that the scuffle comes out of nowhere (and this is a great trait of the film – several emerge from literally nothing) and involves Carano wearing a dress, is nothing short of sensational. Also, there is a lengthy chase scene through the streets and over the rooftops of Dublin shortly after, which is also superbly done.
Having said that all that, Carano doesn’t fare so well in the dialogue exchanges. With an odd expression that always seems to contain a half smile, she seems to be too wary of her delivery - blunt and without much conviction or confidence. She is surrounded by a talented male cast – including an excellent Fassbender as her associate on the Dublin mission, Channing Tatum, quite good as a former associate of Mallory, who is the first to come into contact with her instructed to take her down, and Ewan McGregor, as Mallory’s former lover and boss. Bill Paxton, who plays Mallory’s father, Antonio Banderas, Michael Douglas and Matthieu Kassovitz all appear in small roles that really could have been played by anybody. None of them are given much to do, nor developed sufficiently. Paxton is perhaps the most impressive – finally discovering who his daughter is, and placing his life in danger to cover for her. 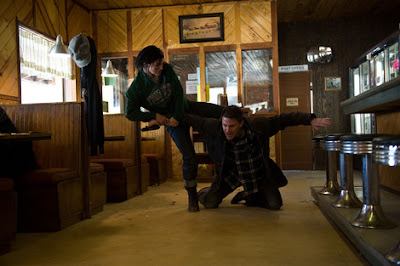 The film, understandably actually, has not fared well with audiences, despite the mostly positive critical acclaim, and this might have something to do with the very limited release here in Australian cinemas. I feel like I was lucky to see this film. I am sure glad I did, because despite the narrative flaws – I really didn’t like the film’s structure of Mallory recounting her missions in Barcelona and Dublin to a stranger in a vehicle, ensuring that he (and we) remember everyone’s names along the way. Also, despite the pretty obvious twists and turns, the film is a treat on a technical level, and features some astounding action set pieces. At times I was barely attentive, at other times I was on the edge of my seat. Ultimately, it is far from Soderbergh’s best film, but as a debut foray into the action genre, it is still an impressive accomplishment.