Tarsem Singh (The Fall, Immortals) gets his chips down first in the battle of the Snow White reboots released in cinemas this year. With Snow White and the Hunstsman, which actually looks pretty good, arriving later this year, there has been plenty of speculation as to whether campy comedy, or dark thrills will be better received by audiences. Mirror Mirror didn’t promise much considering the promotional material, and I now can declare, the modernisation of the 1812 Grimm fairytale has little to praise. Technically over-indulgent, poorly cast, embarrassingly unfunny, and far too proud of itself, Mirror Mirror might please some youngsters – and fans of the awful spoof series' that have plagued cinemas for a decade – but what about grown-ups? 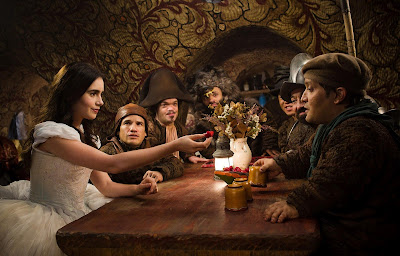 Firstly, why was it even called Mirror Mirror? Oh, who cares.
Snow White (Lily Colins) has spent most of childhood imprisoned in the castle with her evil stepmother, The Queen (Julia Roberts), after her loving father passes away. The Queen has ruled with malice, sending most of the residents in her realm into poverty, and continues to demand taxes to fund her lavish social gatherings. Snow, having just turned 18, and the rightful heir to the throne, is urged to see how the people are living, and is appalled how the realm has fallen into disrepute. Banished to the woods and ordered to be killed, she manages to escape and is taken in by a merry band of Dwarves. Together they start an uprising.
At the same time, The Queen is trying to woo Andrew Alcott (Armie Hammer), a wealthy Prince from a neighbouring Kingdom, to appease her dire financial situation. The problem: on the road to the Queen's castle, he meets Snow White and has become infatuated. The Queen will stop at nothing to prove to Alcott that she is the fairest, but Snow, fueled by her enthusiastic cohorts, is determined to both win her Prince, who has also captured her heart, and take back the throne.

Sure, youngsters may have some fun with the film, and may be mesmerised by the beauty of some of the sets and costumes - the latter impressively designed by the late Eiko Ishioka - but one of the most charming features of the Snow White story, and the highlight of this film, are the Dwarves. I liked the idea to change them into social outcasts who now make a tough living as bandits and thieves, but will this really wash with the kids? I don’t think so. I'm glad Mirror Mirror isn't in 3D, because it makes recommending this film a little bit easier. In addition to enduring it, parents would have had to cough up the outrageous price for the addition of 3D. 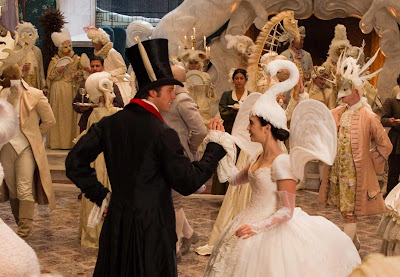 It is a baffling film, and nothing makes much sense. Apart from a series of extended, interrelated gags, there isn't much driving the narrative, which is full of wayward, groan-inducing sequences. It felt like the Dwarves were on stilts so that later there could be a joke about ‘Giant Dwarves’. There was more than one. There are a few mentions about a Beast that haunts the woods throughout the film – and this is the Queen’s scare tactic to the townsfolk (all eleven of them) - and it was inevitable it would end with Snow White’s confrontation. It serves no purpose in the story, however.
Julia Roberts appeared to have fun in her villainous role, but she was very miscast, and provided few laughs through her over-the-top and unconvincing delivery. I don’t want to delve into the trailer, but my main fear was that Roberts’ ‘funniest’ moments were used in there. The thing is, they weren’t actually funny. There are a few surprises, but beyond being a bitching and conniving irritation, these same jokes fail in the context of the film, and she is a very weak villain.
Nathan Lane has seen better days, but is amusing. Armie Hammer (excellent in The Social Network, effective in J.Edgar) is a talented man, and while he balances the dimwitted with the charming quite well, the role results in him behaving like a puppy at one point. He can, and will, do better. I enjoyed the dwarves and despite growing tired of hearing seven subsequent one-line responses to everything, and I wish there was more time spent with them. 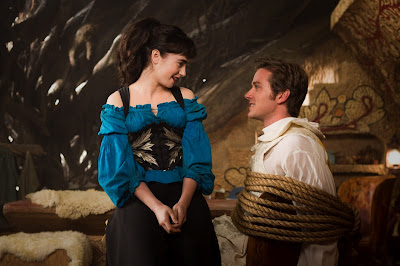 Better was the radiant Lily Collins, well suited to the role and giving a sweet performance. I like the fact that Tarsem switched the role around and made Snow White the heroine – not waiting for the Prince to come and save her, but learning how to defend herself, and going on the offensive. All this is undone when Snow White proudly announces the film’s subversion. Thank you, we know you’re being clever, but lets not waste any more time.

The work that has gone into the design of the sets and costumes is very impressive, and can’t be dismissed, and while the look and style of the film is intentional; the fact that every scene felt so staged (the Queen’s bedroom and ballroom, the Town Square, the clearing in the woods where every battle is staged, and the Dwarves’ home, to name most of them), severely limits the scope of the film. I think Tarsem went way too indulgent with his production design, and on the one hand it wasn't used effectively within the story (merely as a backdrop, and rarely playing a direct role in any scene) and on the other, one is constantly distracted by the silliness of the story and the scenery-chewing performances. Also, most sequences didn’t last long enough and were pointlessly shot from peculiar angles, for the vibrant atmosphere to be conveyed.
Ultimately, Mirror Mirror is unashamedly cartoonish and certainly not sluggish in its pacing. Collins was convincing, and the Dwarves worked well together. I was never bored, I’ll give the film that, but the few times I found myself laughing I had to question whether I was laughing at moments within the film, or the mediocrity of the film itself. A couple of amusing montages (featuring the Dwarves) and bursts of inventiveness (the Queen’s beauty treatment, the giant marionette puppets), and some cheeky pokes at the original fairy tale, isn’t enough to save a low-shooting Tarsem from delivering an overly stagey, hack job of a mess. Leaving a comedy feeling this frustrated is not fun, and while I understand that this is meant to be a PG, family-friendly outing, I can’t justify recommending this at all. This farce is far too ridiculous and far from universally appealing.
My Rating: ★1/2 (D+)
Posted by Andy Buckle at 2:19 PM