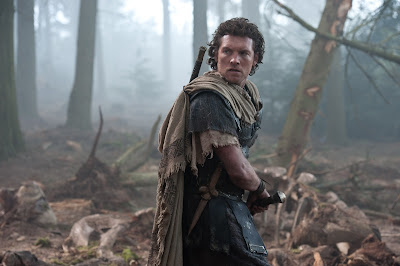 There are five new releases hitting cinemas across Australia on Thursday March 29th. Roadshow have two big films opening - Tarsem Singh's Mirror Mirror, and the sequel to the 2009 blockbuster hit, Clash of the Titans (which I crowned my worst film of 2009), Wrath of the Titans. The Lorax, the animated adaptation of the classic Dr. Seuss story, A Dangerous Method, David Cronenberg's examination of the professional relationship between Freud and Jung, and the critically acclaimed Finnish comedy/drama, Le Havre.

Wrath of the Titans - A decade after his heroic defeat of the monstrous Kraken, Perseus - the demigod of Zeus - is attempting to live a quieter life as a village fisherman and the sole parent to his 10-year-old son, Helius. Meanwhile, a struggle for supremacy rages between the Gods and the Titans. Dangerously weakened by humanity's lack of devotion, the gods are losing control of the imprisoned Titans and their ferocious leader, Kronos, father of the long-ruling Zeus, Hades and Poseidon. Persues cannot ignore his true calling when Hades, along with Zeus' godly son, Ares (Edgar Ramirez), switch loyalty and make a deal with Kronos to capture Zeus. This sequel is directed by Jonathan Liebesman (Battle L.A). Oh dear.

Mirror Mirror - One of the most beloved stories of all time is coming to life in this fresh retelling of the Snow White legend. Mirror Mirror features breakout star Lily Collins as Snow White, a princess in exile, and Julia Roberts as the evil Queen who ruthlessly rules her kingdom. Seven courageous rebel dwarfs join forces with Snow White as she fights to reclaim her birthright and win her prince in this comedy filled with jealousy, romance, and betrayal that will capture the hearts and imaginations of audiences. The film also stars Armie Hammer as the Prince and Nathan Lane as the hapless and bumbling servant to the Queen. If you have seen one of the near-unwatchable trailers for this film you will know that it looks like a disaster. Tarsem is skilled in the visual department, but the humour looks to miss the mark far to often. Oddly, early reports have been positive. Check out the trailer (below) and my review of the film (online tomorrow) to aid with your decision.

The Lorax - The 3D-CGI feature Dr. Seuss' The Lorax is an adaptation of Dr Seuss' classic tale of a forest creature who shares the enduring power of hope. The animated feature follows the journey of a boy as he searches for the one thing that will enable him to win the affection of the girl of his dreams. To find it he must discover the story of the Lorax, the grumpy yet charming creature who fights to protect his world.

Le Havre - In this warmhearted portrait of the French harbor city that gives the film its name, fate throws young African refugee Idrissa (Blondin Miguel) into the path of Marcel Marx (Andre Wilms), a well-spoken bohemian who works as a shoeshiner. With innate optimism and the unwavering support of his community, Marcel stands up to officials doggedly pursuing the boy for deportation. A political fairy tale that exists somewhere between the reality of contemporary France and the classic cinema of Jean-Pierre Melville and Marcel Carne, Le Havre is a charming, deadpan delight. Check out the trailer (below).

A Dangerous Method - Seduced by the challenge of an impossible case, the driven Dr. Carl Jung (Michael Fassbender) takes the unbalanced yet beautiful Sabina Spielrein (Keira Knightley) as his patient in A Dangerous Method. Jung's weapon is the method of his master, the renowned Sigmund Freud (Viggo Mortensen). A Dangerous Method hit U.S screens months ago, and while Knightley's performance has met mixed reactions, the general consensus is that this lacks the energy of Cronenberg's best films. Dialogue heavy, while certainly thought-provoking and offering up a great cast, but ultimately a bland endeavour.


Weekly Recommendation: Le Havre feels like it has escaped from a past era of filmmaking. It is a very odd film, but one that will be a delight for many I am sure. A Dangerous Method might be exclusively for Cronenberg fans and viewers both with an interest in psychoanalysis and who can stand Keira Knightley on screen. The Lorax and Mirror Mirror are in time for the holidays, and will keep families entertained. I wouldn't rush to see any of these however. The Raid is still playing, however.
Posted by Andy Buckle at 9:17 AM