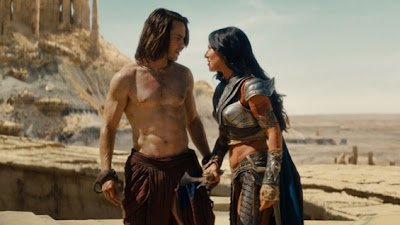 Incredibly, John Carter (here portrayed by Taylor Kitsch) first appeared back in 1912, where it was originally serialized over six monthly installments in a magazine called The All Story. These installments later became A Princess of Mars, which this film, adapted by Stanton, Mark Andrews and Michael Chabon, is largely based on.
The story takes shape following the early introduction of Carter’s nephew, Edgar Rice Burroughs (Daryl Sabara), the character that frames the narrative and is summoned to ensure that the late John Carter’s bizarre burial requests are followed through. During his instructions, Carter has documented an extraordinary tale, and it is literally read by Burroughs to the audience. Carter was a former Confederate Captain during the Civil War, who after defecting and searching for gold, is rounded up to return to service. In his attempts to escape from his Colonel (Bryan Cranston), Carter hides out in a cave in the middle of the desert. There he discovers a room lined with gold and a chained pendant that suddenly transports him to a strange land, later revealed to be Barsoom, or Mars.
After realizing that the change in gravity has enhanced his physical capabilities, he finds himself in the company of the Tharks - a race of four-limbed alien creatures - before becoming part of the conflict raging between the nations present on the red planet. Sab Than (Dominic West), the Prince of Zodanga, has been assigned a brilliant power by the Holy Therns, led by Mark Strong’s Matai Shang, and is beset on taking over the realm of Helium, led by the Jeddak, Tardos Mors (Ciaran Hinds). Fearing the overthrow, Tardos agrees to allow Sab Than to marry his strong-willed but resistant daughter Dejah Thoris (Lynn Collins). When Thorin tries to overthrow Than’s aerial fleet as he enters Helium (one of the film's more exciting action pieces) she is rescued by the now fully-adapted Carter, witnessing the battle from the Thark city. Believing him to be their only chance of victory she leads him on a quest, which he selfishly believes will result in a return to Earth, before ultimately realising he is an integral part of her plan to save Barsoom. 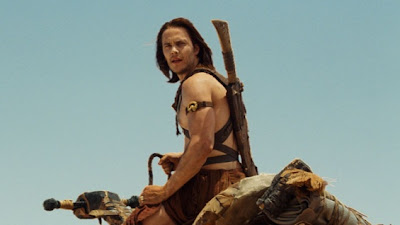 Honestly, for a film with such a big budget (in the vicinity of $250 Million) and featuring some pretty interesting visual effects and motion capture, it isn’t a very engaging or memorable story at all. Taking the longest route possible to bring a viewer around to an inevitable epic final confrontation, bogging the story down with a pending marriage, a strained father-daughter relationship, Carter’s prolonged assimilation into the Thark tribe, and a journey to discover the secret of the ‘Spider’ (shrugs), we are introduced to a number of one-dimensional human characters we don’t really care about and asked to trudge through a number of action sequences that disappointingly lack tension.
It doesn't help that John Carter is full of mediocre acting, and often-inaudible dialogue. Taylor Kitsch seems to have a lot of fun in the role, but didn't transform the character into one I am anticipating to see again on the big screen. Dominic West, Ciaran Hinds and James Purefoy (Antony to Hinds' Caesar in HBO's Rome) have so little screen time, they are pretty much wasted, while Mark Strong plays a bald-headed villain...again.
It is a bore, and very little stuck with me. Disney, reportedly, has shot themselves in the foot by funding this film. Avatar fans are obviously the target audience, but despite some cool moments – the arena battle didn't play as big a part as expected, but it does feature Carter emerging through the interior of a slain blue-blooded albino gorilla - it doesn't generate anything close to Cameron's awe-insiring (if also horrendously plotted) experience.
John Carter, both in story and in production, has many evident influences. Almost every scene bears some resemblance to a Hollywood film that has preceded it. Viewers will recognize similarities to Avatar (Star Wars and The Fellowship of the Ring too) with Carter being held captive within the Thark tribe. Though he doesn’t spark up a romance with the Jeddak’s daughter (voiced by Samantha Morton), she does become an ally. While the tribe fears him and treats him with distrust, their leader Tars Tarkas (Willem Dafoe) is intrigued by his abnormal jumping abilities and believes he could aid them in their struggle against Zodanga. But, there are also a few Thark warriors who hate him for no reason other than to emerge as antagonists later in the film. There has to be some sort of conflict of course, but all of the villains are so thinly developed. Still, I did like most of the sequences with the Tharks – except the use of Carter's ‘canine’ (and that is a loose term) sidekick. 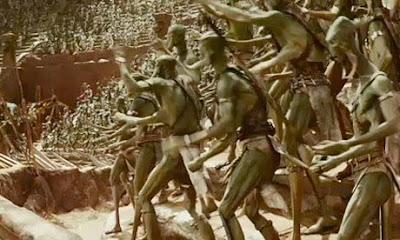 Having not read any of the novels, I can’t comment on how well the descriptions in the novel are conveyed to the screen. It sure seems like Stanton admires the material, but surely it just doesn’t translate as well as intended. The film’s length becomes a burden and surpassing two hours isn't justified, considering that there are only a couple of action set pieces. We have mentioned the visual effects and tech work, and it is mostly very impressive. This is also a 3D film – and far from the best the technology has offered. I remember being impressed by Michael Giacchino’s score, but it doesn’t come close to his best Pixar collaborations (Up anyone?).
While there are some rousing moments that get the adrenalin going, and a few laughs - and this is an admirable quality, the fact that it doesn't take itself too seriously - the film's good humour still doesn't result in a great deal of fun for the audience. If you think this looked a bit like Avatar, you're right. It is almost exactly the same. Considering Andrew Stanton is involved, it is disappointing. John Carter is a confusing, overlong, middle-of-the-road science fiction fantasy that will only work for genre fans familiar with the novel, and young people who like superheroes with the ability to jump really high.
My Rating: ★★ (C-)
Posted by Andy Buckle at 12:47 AM