Classic Throwback: Dawn of the Dead (George A. Romero, 1978)

Dawn of the Dead, the ridiculously gory Zombie film by genre legend George A. Romero, is now an iconic classic of the horror genre. Eleven years after his ultra low-budget debut, Night of the Living Dead, Romero returns with a bigger budget (though it is still modest) and throws in a heap more gore. Following the scenario set up in Romero’s debut, the United States has been devastated by an epidemic of unknown origins, which reanimates recently deceased human beings and turns them into flesh-eating Zombies. Society has all-but collapsed, despite the efforts of the United States Government and local authorities to control the situation. 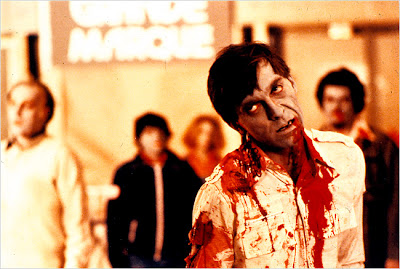 The story of the small of group of survivors, including a Philadelphia television producer, Francine (Gaylen Ross), her boyfriend Steven (David Emge), a network traffic helicopter pilot, and a pair of SWAT officers, who seek shelter in a giant shopping complex during a Zombie apocalypse was re-imagined by Zach Snyder in his 2004 film of the same name. It was also the inspiration for the Simon Pegg/Edgar Wright comic parody, Shaun of the Dead.


Through an unusual style that utilises dialogue and score on near-identical decibels, Romero creates a world that is chaotic from the very beginning. It is also quite confusing, initially. When news spreads that the dead are rising to once again walk the earth and pray on the living, a mass panic sets in with people trying to find a safe way to escape the major cities. Networks try and report any news that becomes available, while scientists debate the nature of the antagonists, trying to hypothesize what they are and how they can be stopped.

The epidemic spreads when an ill-fated SWAT assault on an apartment block releases several contained Zombies, who in-turn prey on their unsuspecting victims. The residents of this building had been ignoring the martial law imposition of delivering the dead over to National Guardsmen. It is during the raid that the infamous exploding head scene takes place and two SWAT operatives, Roger (Scott Reiniger) and Peter (Ken Foree) meet and decide to flee Philadelphia together, evcntually joining up with Francine and Stephen. 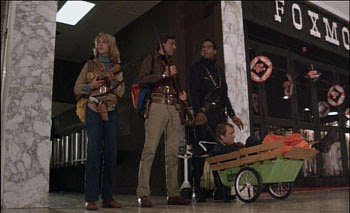 Setting the film predominantly within the world of a shopping mall, Romero critiques the strongest desires of a greedy consumerist culture; to be able to have any material desire right at their fingertips, and functions as quite a clever social commentary. Essentially, the Zombies share more in common with the aimless consumers that patrol the atriums of large shopping malls than many people would like to admit.
While the visual effects and make-up team, led by Tom Savini, do a sensational job, Romero comes up with fresh and imaginative ways for the survivors to take down the Zombies, and for the Zombies to feast on the living. I felt the film was let down by a little by the unashamed cheesiness (especially in the early scenes), the barely acceptable performances and the substantial lags in the action. The latter half of the film is very stop-start, with lengthy periods where nothing of note happens.
It is rarely scary; though there are moments of heightened suspense. The open ending, which I remember thinking was great on my initial viewing, just didn’t have the same ‘where-to-now?’ impact as a film like John Carpenter’s The Thing, but if you’re in the mood for a Zombie flick that works pretty effectively as a parody on consumerism, there are few better examples out there.
Posted by Andy Buckle at 9:06 PM