Robert Altman's highly acclaimed 1970 film MASH centres on Captain "Hawkeye" Pierce (Donald Sutherland) and Captain "Duke" Forrest (Tom Skerritt) who are assigned to the 4077th Mobile Army Surgical Hospital, who are in need of replacements. It is evident that they are mischievous, womanising rule-breakers who immediately start flirting with the nurses and ignoring protocol having arrived at the camp in a 'borrowed' jeep. Despite this,they soon make it clear that they are both excellent surgeons. They clash with their new tent mate, Major Frank Burns (Robert Duvall) and request with Lt. Colonel Henry Black (Roger Bowen) to have a specialist thoracic surgeon assigned to the 4077th. This would be Hawkeye's eventual partner in crime, Captain "Trapper" John McIntyre (Elliot Gould). 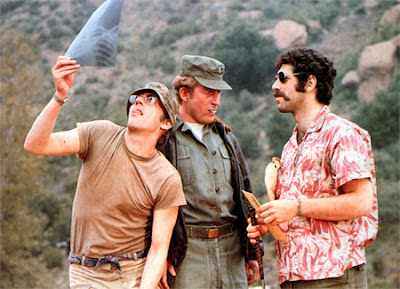 There is no real plot, but the film is comprised of a series of experiences and misadventures. A lot of crazy things happen, including a ploy to cure the anxieties of "Painless Pole" Waldowski (John Schuck), a dentist who has recently suffered a ‘lack of performance’ and now believes he has homosexual tendencies. The man contemplates suicide and seeks advice on which method to use. Hawkeye and Trapper suggest the ‘black capsule’ and an impromptu last supper, which includes the strains of “Suicide is Painless”, ensues.

There is also a ploy to discover whether the no-nonsense chief nurse Major Margaret "Hot Lips" Houlihan is ‘naturally blonde’, while Hawkeye and Trapper accept an order to operate on the GI son of a U.S Congressman purely because the trip to Japan presents the opportunity to play on quality golf courses. The film ends with a friendly football match between the 4077th and another unit, where Hawkeye insists they apply for a specific neurosurgeon, "Spearchucker" Jones (Fred Williamson), to help them win the game. He was a former professional player with the San Francisco 49ers.

I can see why MASH is considered culturally significant – as a dark and satirical anti-war comedy set during the Korean War that actually pokes more at Vietnam. It is frequently amusing, but I did expect it to be funnier. I thought the jokes felt dated and weren't as relatable as they no doubt would have been in the 70's. In this sense, the film isn't timeless. Most of the laughs came through the excellent comic timing between Sutherland and Gould, who are both excellent. Indeed, the entire ensemble cast (an Altman trademark) do a great job. The quite gory medical scenes were very realistic, too.

The film has a sense of chaos to every frame, predominantly through the use of the tracking long shot (often capturing characters through the see-through walls of the tents) and jarring zooms. These techniques are certainly commendable feats, but it felt like there was never any order to what was happening. The football sequences are insane, infused with this energy through the rapid editing. There is also a blending of dialogue and music to further the complexity of these sequences. The war was chaotic, the doctors worked long hours and there was always bustling activity around these medical camps. While simultaneously depicting the zany escapades of the characters, Altman tries to authentically recreate this atmosphere. While the way the film is edited together, like fleeting events or short vignettes, gives breadth to the activity, it does make it a difficult film to process. There is lots of fast-talking, with actions existing purely for the benefit of that scene alone, and rarely for the film as a whole.
Perhaps I am used to the television show, which I personally found to be a lot funnier - especially during the early seasons. While I believe it ran on way too long, and continually brought in new characters to replace those written out, it has cemented itself in popular culture. But Altman’s film, which is actually adapted from a novel, MASH: A Novel About Three Army Doctors by Richard Hooker, preceded it, and is actually favoured by most people. While I thought Donald Sutherland was great (as usual), in the role of Hawkeye he’s no Alan Alda, who was cast as the character in the television series. I guess, overall, I was a little disappointed by MASH. The attention given to subtle details (such as the running joke of the PA announcer making mistakes) is something to marvel at, while technically it is innovative. Despite the chaos, there remains a clear sense of intention from Altman too. As part of my Director-of-the-Month marathon I next look forward to watching Altman's equally acclaimed works, McCabe and Mrs Miller and Nashville.


Want to catch up on M.A.S.H. the TV series? You can do so at LOVEFiLM as well as rent from a selection of over 70,000 titles and even watch tv online.
Posted by Andy Buckle at 5:56 PM