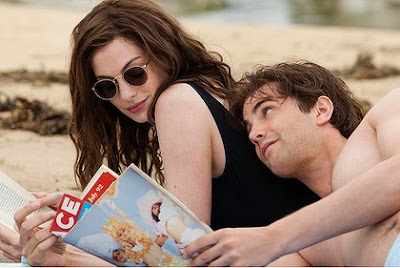 There are six scheduled releases for Australian cinemas this week, though I'm not certain that Winnie the Pooh is playing anywhere in Sydney. The others are Final Destination 5, One Day, The Help, Life in a Day and Chalet Girl. The solid current line-up, including Senna, Win Win, The Guard and Beginners, takes a beating this week.

Final Destination 5 - Death is just as omnipresent as ever, and is unleashed after one man's premonition saves a group of coworkers from a terrifying suspension bridge collapse. But this group of unsuspecting souls was never supposed to survive, and, in a terrifying race against time, the ill-fated group frantically tries to discover a way to escape Death's sinister agenda. According to Rotten Tomatoes (where it sits with a pretty solid 60% score) this latest 3D instalment represents a surprising return to form for the franchise. I have seen the first one, a number of years ago, and I remember it being cheesy slasher stuff with a number of inventive ways to kill people. We find ourselves at number 5. Nah, I don't think so!

One Day - After one day together - July 15th, 1988, their college graduation - Emma Morley (Anne Hathaway) and Dexter Mayhew (Jim Sturgess) begin a friendship that will last a lifetime. She is a working-class girl of principle and ambition who dreams of making the world a better place. He is a wealthy charmer who dreams that the world will be his playground. For the next two decades, key moments of their relationship are experienced on July 15th. Somewhere along their journey, these two people realise that what they are searching and hoping for has been there all along. As the true meaning of that one day back in 1988 is revealed, they come to terms with the nature of love and life itself. If you've seen the trailer, you know that Anne Hathaway's British accent is pretty atrocious, and while some people have become quite involved in Lone Scherfig's (An Education) newest film, others have claimed it to be really bad. I'm skeptical (of course) but it may be one I bring myself to watch this week.

The Help - This film adaption of the best selling novel stars Emma Stone as Skeeter, Viola Davis as Aibileen and Octavia Spencer as Minny - three very different, extraordinary women in Mississippi during the 1960's, who build an unlikely friendship around a secret writing project that breaks societal rules and puts them all at risk. From their improbable alliance a remarkable sisterhood emerges, instilling all of them with the courage to transcend the lines that define them, and the realisation that sometimes those lines are made to be crossed. The Help also stars Jessica Chastain and Bryce Dallas Howard, and while the film has received some positive reviews, I believe Viola Davis steals the show in the acting department.

Chalet Girl - A working class girl (Felicity Jones) lands a job in a posh ski resort and discovers her natural snowboarding genius while dating the boss' son. I know nothing about this other than that Felicity Jones seems to be a talent on the rise after her acclaimed and award-winning performance at the Sundance Film Festival for Like Crazy. This also stars Bill Bailey (Black Books) and Brooke Shields.

Life in A Day - For this ground-breaking user-generated project, Academy Award winning director Kevin Macdonald (The Last King of Scotland and Touching the Void) teams up with Youtube to create a feature-length documentary shot in a single day - 24 July 2010 - from thousands of hours of footage submitted by people all over the world. Well worth a look if you can find a cinema playing it.

Winnie the Pooh - Walt Disney Animation Studions returns to the Hundred Acre Wood with Winnie the Pooh. Featuring the timeless charm, wit and whimsy features of the original featurettes, this all-new movie reunites audiences with the philosophical 'bear of very little brain' and his friends. Owl sends the whole gang on a a wild quest to save Christopher Robin from an imaginary culprit. It turns out to be a very busy day for a bear who simply set out to find some honey. Inspired by three stories from A.A Milne's books in Disney's classic, hand-drawn art style. Though short (73 minutes), it would be a nostalgia trip for many viewers and, judging by the 90% Rotten Tomato score, it's pretty darn good too.

Weekly Recommendation: I imagine Life in Day is well worth a look. Winnie the Pooh too. But chances are, you won't find anywhere playing these films. With a wider release, I'd stick with The Help, which should offer up a story both amusing and powerful. Still, if you haven't seen The Guard, which had a big opening weekend, you are missing out. There is also a film called Senna out. Come on people. Get there.
Posted by Andy Buckle at 12:48 AM