Lars Von Trier’s hotly anticipated follow up to 2009’s Antichrist garnered controversy at the Cannes Film Festival once again with the outspoken director being banned from future festivals for bizarrely expressing his admiration for Hitler during a media press conference. Kirsten Dunst went on to win the Best Actress award and the film, considered to be one of Von Trier’s least controversial (considering the subject matter), was met with largely positive responses. It was my first screening of the 2011 Melbourne International Film Festival. 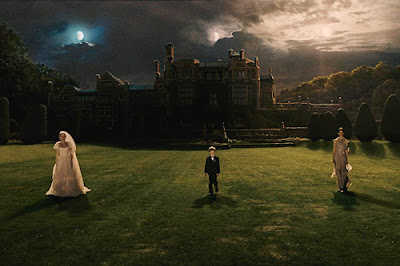 I think the comments Von Trier made at Cannes were overblown out of proportions. The man, though it doesn’t seem to be the case judging by his resume to date, has a sense of humour. In Melancholia, this is eerily prevalent in the bizarre wedding sequences that make up the film’s first, and superior, half. Essentially, Von Trier’s idea for the film was to dramatise how a depressed person reacts more calmly than others in a situation of high stress. The man has a past plagued with anxiety and depression, so he is certainly no stranger to the afflictions. But the sledgehammer subtlety he adopts overwhelms some of its more brilliant reservations.

The film begins with an introductory sequence, which depicts a number of highly stylized (and in my opinion, over-indulgent) images of the main characters experiencing a phenomenon, as well as an incredible image from space, which presents a collision between Earth and a larger planet. What are these images? Are they a dream? A premonition? Evidence of what is to come? The rest of the film is split into two parts, centred on two sisters, Justine (Kirsten Dunst) and Claire (Charlotte Gainsbourg), who each experience individual psychological traumas. The former suffers from chronic depression, and the latter from a crippling existential mania about the end of the world in the form of a planet called Melancholia that has emerged from behind the sun and started a collision course towards Earth. Subtle right?
The films first half revolves around the wedding night of Justine and Michael (Alexander Skarsgard), at the castle owned by Claire and her husband John (Kiefer Sutherland). Well aware of Justine’s fragile mental state, Claire hopes that throwing her a lavish wedding will bring her some happiness. After all, your wedding day is supposed to be the happiest of your life. The night does not run successfully, with Justine’s divorced parents (John Hurt and Charlotte Rampling) openly bickering at the dinner table and Justine, through a series of ever-worsening incidents, gradually becomes sadder and more desperate throughout the night, resulting in her complete alienation from her sister, her parents, her boss (Stellan Skarsgard) and eventually her new husband. While Justine's self-destruction is near unfathomable and does draw sympathy, the dysfunctional family dynamic is riddled with humour, which kept these sequences watchable. 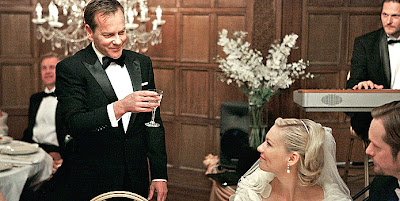 The film then shifts to focus more on Claire, who welcomes a now severely depressed Justine to the castle where the wedding was held. Some time has passed, and Melancholia is now visible in the sky. Justine, on her wedding night, had been intrigued by a red star. This star had then disappeared, revealed to have been eclipsed by the presence of Melancholia. John, an astronomy enthusiast, is excited about the 'fly-by', the event set to take place in five days where Earth and Melancholia will pass by one another. Claire, however, becomes very anxious about the planet, believing it will collide with and destroy Earth.
I thought Kirsten Dunst was exceptional here. She very convincingly plays an intriguingly tragic woman whose frayed mental state gradually reveals more and more demons during the course of her wedding. Her happiness is painfully artificial, and her anxiety horrifically self-destructive. Charlotte Gainsbourg, who I had some admiration for following Antichrist, was very good, but nothing short of irritating. The supporting cast mostly played themselves. This was an observation by Tom Clift, one of my viewing colleagues. Kiefer Sutherland (who still possessed the Jack Bauer-like growl) was the most engaging, though Stellan Skarsgard, John Hurt and Charlotte Rampling all turned in interesting performances.
But, here’s what I didn’t like about the film - the direction adopted by the second half of the film makes this web of complex and dysfunctional relationships seem inconsequential. They exist solely to reveal the motivation for Justine’s depression. The stellar ensemble is trimmed to just four characters, with Justine’s worsening mental state resulting in her cynical, but calm, outlook about the end of the world (“The Earth is evil, we don’t need to grieve for it. Nobody will miss it.”). Faced with the possibility of the Earth ending in five days time, how do you react? You don’t know. Claire becomes anxious and hysterical. 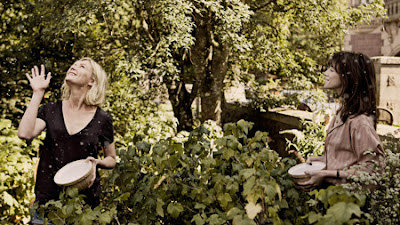 In Melancholia the only rational thinker during this time of great stress, is the manic-depressive. The events of the second half of the film take place after the wedding, with Melancholia supposed to pass by Earth in five days time. We witness these five days and the crumbling of Claire. Initially I thought that the events depicted here were before the wedding, and I really wish they were. I think the film would have been more interesting if the night of the supposed 'fly by' was also the night of the wedding, and it would have given Justine's brave performance on her wedding night a little more complexity too.

There are a number of ways this film could have gone, but with the exception of tying depression in with the apocalyptic sci-fi premise, and an instinct vs. science argument, I felt like it didn't actively engage in very much. The film does look amazing, mixing raw, hand-held footage with striking hyper-stylized captures. The fleeting emotions and tics of the characters add to their naturalism. Several shots, in particular the ones of both the Moon and Melancholia shining down on the courtyard and the final one, are phenomenally done.
Don’t get me wrong, I certainly didn’t hate the film, but it was a disappointing, often-frustrating and unnecessarily tedious experience. I tried, quite excruciatingly, to remain attentive, but amidst the bloated length and snail pace, I couldn't shake the feeling of inevitability that dampened the tension. But as an ambitious exploration of the extremes of the emotional spectrum, it is hard not to admire and respect Von Trier. The wedding sequences are strong, the visuals staggeringly beautiful at times and the performances excellent. It is also most definitely a film to experience in the cinema environment (like The Tree of Life) but those unacquainted to Lars Von Trier films should proceed with caution.
My Rating: 3 1/2 Stars (B-)
Posted by Andy Buckle at 3:13 PM