Just a year following his comedy hit, MASH, Robert Altman directed McCabe & Mrs. Miller. It was adapted from the Edmund Naughton novel, McCabe, by Brian Mckay and Altman himself. Now considered an esteemed genre classic, it is an American frontier western set at the beginning of the 20th Century and follows John McCabe (Warren Beatty), a small-businessman and gambler who arrives in the town of Presbyterian Church with the hopes of setting up a whorehouse and a saloon. He enlists the help of a British ‘madam’, Constance Miller (Julie Christie), and the pair, with the help of the local mining townsfolk, turn the town into a thriving Metropolis. That is until associates of a ruthless mining corporation arrive with offers to buy out his land, and threaten his life when he refuses. 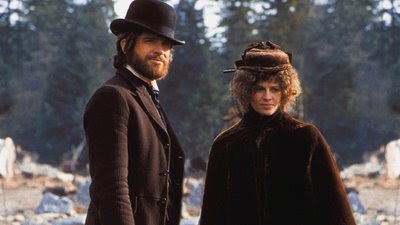 To the mournful sound of Leonard Cohen, we are initially introduced to John McCabe as he rides into town. We learn that he is charismatic gambler with an effortlessly forceful temperament, who immediately takes a prominent position amongst the simple-minded townsfolk of Presbyterian Church in the Northwest. Well dressed, carrying a gun and possessing a mysterious identity, the townsfolk accommodate for the stranger by allowing him to deal a card game. Rumours also swirl amongst the group that he is a feared gunslinger.

Whether McCabe has indeed killed a man in the past is unknown to us at this point, but it becomes clear that he has made a transition into business, venturing into town with enough wares to start up his own. Having established a makeshift brothel, consisting of three prostitutes purchased in the nearby town of Bearpaw, he also begins construction on a saloon and bathhouse. Soon enough, an Englishwoman, Constance Miller, an Opium-addicted ‘madam’, arrives in town and convinces McCabe that she could do a better job with the brothel. Won over by her convincing pitch, he agrees to a partnership, with Constance bringing in higher-class prostitutes to the establishment.
But, along with the thriving success of the town, come the vultures. I was reminded at times of Paul Thomas Anderson’s masterpiece, There Will Be Blood, which may have been influenced by McCabe. Both films are frontier Westerns set at the turn of the 20th Century, but instead of the oil boom, Altman’s film focuses on gambling, prostitution and zinc mining. Both McCabe and Daniel Plainview (Daniel Day Lewis) are ambitious, greedy entrepreneurs trying to find success and make the most of the promises of the American dream. As soon as they have created something substantial, a rival (and larger) conglomerate tries to buy them out, immediately taking advantage of their months of hard work.

Agents of the Harrison Shaughnessy mining company in Bearpaw, who wish to buy out his businesses and the surrounding zinc mines, approach McCabe. While Plainview is ruthless and rejects his offers with conviction, McCabe is sure his façade as a ‘tough guy’ is strong enough to repel the instigators. But he overplays his hand with negotiations and soon discovers that his life is in danger. He desperately seeks out the agents, trying to secure a deal. It is too late. Three bounty hunters have entered the town and holed up at one of the saloons, leading to an inevitable climactic confrontation as McCabe refuses to leave town. Throughout the film there is pessimism in the air. We see it coming. Constance sees it coming and escapes on the night of the assault to a Chinese Opium den. But McCabe is too proud.
The first thing you notice about this film is how it looks, and how it remains relatively reserved despite Altman endowing the mise en scene with plenty of activity. What I admired about the film is that it never seems to be in a rush, remaining compelling despite predominantly comprising of business transactions and the interrelationship between the central protagonists. Presbyterian Church has few substantial buildings. It is cold, muddy and windswept. For lack of a better word, it is bleak. Instead of the barren sun-drenched desert climate typical of Westerns, we are thrown into the snow-capped hills of Northwestern America. Instead of showdowns between gunslingers and outlaws, or run-ins with the natives, Altman focuses on the American Dream.
The wide-lens cinematography by Vilmos Zsigmond is absolutely breathtaking. Zsigmond would later work with John Boorman on Deliverance and with Spielberg on Close Encounters of the Third Kind (where he would win an Academy Award), but his work on McCabe & Mrs. Miller is especially notable because he uses a technique known as ‘flashing’ – carefully exposing the film negative to a small, controlled amount of light in order to create a muted colour palette. There is barely any natural light, due to the frequently overcast skies and short days, so lamps and wood fires illuminate most of the interior scenes, resulting in the film adopting a grainy, old-photograph look. 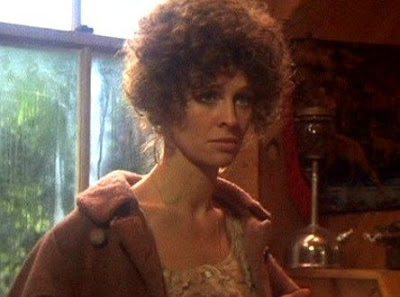 Altman’s camera still roams from room to room, utilizing long tracking shots and sharp pans, and often straying from the action remaining in the room and zooming in on McCabe as he exits the scene in the background. Every camera movement seems to be carefully planned and suits every scene. The climactic shootout is effective through the extraordinary photography and brilliant editing, which heightens McCabe’s isolation in snow-covered town, reveals his poor visibility because of the falling snow, and endows the scene with a gripping suspense.
There are very often several conversations taking place at once with characters talking over one another constantly. While this sounds just as chaotic as MASH, the film never feels out of control. The characters all seem to know one another already; with the viewer feeling like they have been dropped into this world at the same time as McCabe rides into town. I also loved Leonard Cohen’s soundtrack, which perfectly suits the tone and pace of the film. It features, predominantly, three songs from his 1967 album, Songs of Leonard Cohen.
Another strength about this film that can’t be denied is the uniqueness of both McCabe, and Mrs. Miller, and the strength of Beatty and Christie’s performances. The dialogue is sharp too, with McCabe, a real smart-ass at times, coming up with some great banter. Initially presenting a front of charisma and self-assuredness, we begin to see that he is actually a bumbling, cowardly fool, who isn’t as smart as he thinks he is. The façade begins to crumble when Mrs. Miller starts to see him for who he really is. Though she has a tough exterior, she can’t help but find herself charmed by the well meaning and ambitious, but clueless, businessman. 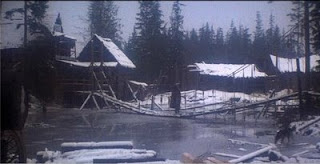 These characteristics are not initially apparent, but they become more recognizable as the film progresses, adding layers of complexity to the characters and presenting a number of surprises. We don’t realize until quite late in the film that they have actually been sleeping together for a while, despite his drunken and overbearing early advances. He pays her the $5 rate, just as a regular customer would, but their partnership begins to mean more to both of them (and especially for McCabe) than just business.
I don’t think this film could have been better. Altman’s direction is impeccable and the film is perfectly paced, eerily atmospheric and expertly photographed. It also cleverly twists some genre conventions. It is immediately one of my favourite Westerns, and while I have been opposed to rating the classics I have been reviewing of late, I want to put how much I loved this film in perspective – 5 Stars.
Posted by Andy Buckle at 8:28 PM