L’illusionniste [The Illusionist] is a delightful little gem of an animated film. Receiving a deserved nomination for Best Animated Feature at the 2010 Academy Awards, French director Sylvain Chomet (The Triplets of Belleville), has beautifully brought a 1956 original screenplay from legendary mime, director and actor, the late Jacques Tati, to life. This magical story is centered on a struggling illusionist (resembling Tati’s famous character M. Hulot) who meets a curious young girl while performing at an isolated Scottish community, who later joins him in his travels, looks up to him as the father-figure she has never known and believes his magical powers to be real. 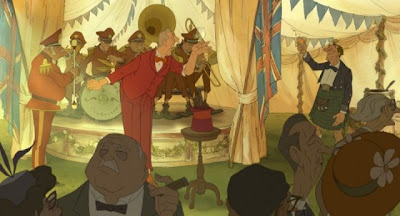 Not only is it endowed with impeccable animation and charming, pleasant sensibilities, but also addresses themes of modernity in the late 1950’s, the rise of consumerism and the unfortunate death of classically skilled artisans like the protagonist. These are themes that were also present in some of Tati’s most acclaimed works, notably the fantastic Mon Oncle and the only film of his I am yet to see, his final work, Playtime. The film’s laborious pace will cause young ones to fidget, while the tributary appreciation for Tati’s work that shines through in every sequence will also be lost. Essentially, this is an animation for adults, and a pretty good one I think.

A skilled, well-meaning illusionist (known by his stage name “Tatischeff”) has realized that his popularity and employment opportunities in Paris are in decline. He packs his meager belongings, including his ill-tempered rabbit (a highlight throughout the film), and moves to London. Here he finds himself passing newly established television stores in the streets and following up popular rock bands. His skills are no longer desired or required to keep people entertained, with more glamorous competition emerging each day. Not content to just give up, he continues trying his hand at smaller gatherings in bars and cafes, but is met with similar disinterest and resentment. 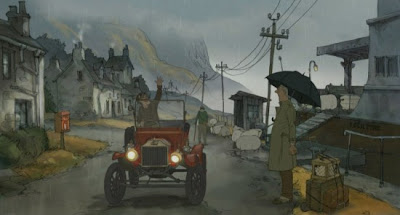 Finally, he accepts an invitation from a drunken patron at a private party, taking a lengthy journey by train and boat to a remote Scottish Island. He performs in a small village pub and is met with rousing applause. He lives in a small room above the pub, where he encounters a girl named Alice, who works there as a housekeeper. Alice is captivated by Tatischeff’s skills, believing his magic to be the real deal, and is humbled by his kind acts of generosity. When he realizes that he can no longer support himself in the village, he decides to try his luck in Edinburgh, with a curious Alice in tow. He books performances in a local theatre and the pair live together in a rundown hotel, sharing the building with other fading performers (a trio of acrobats, a clown and a ventriloquist) who, despite the kindness of Alice in sharing meals with them from time to time, become increasingly destitute and depressed about their fading trades.

L’illusionniste functions almost as a silent film, utilising very little audible dialogue. Often it is restricted to indecipherable gibberish, but there are the occasional flashes of French or English. This absence is not as big a turn-off as you would expect. In most cases, what is being said has no consequence, because all that we need to know is revealed through the animated graphics, which are quite wonderful. The quality of the score (also by Sylvain Chomet) and the sound effects more than effectively make up for this absence also. It is extraordinary how skilled the animation is and how much intricate detail is present in every frame. 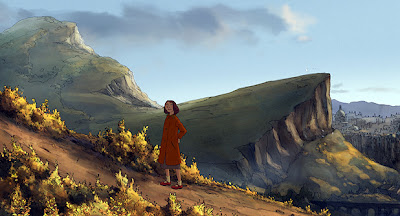 A large proportion of the scenes exist as brief vignettes, lasting as little as only a couple of seconds on occasions. But it is clearly evident how much work has gone into making every scene perfect. There are always a number of different things happening in every scene, with a quick glance around the frame sure to reveal fleeting amusements. The beautifully realized streets of Paris, London and Edinburgh, and the small-town atmosphere of the Scottish Island are a delight. It is always so refreshing to see filmmakers stick with this mode of animation, when we are consistently bombarded with big-budget studio productions with computer-generated animated visuals.
It never divulges in unnecessary exposition, but simply just tracks the journey of the illusionist as he struggles to make a living in a world where society’s desire for entertainment is rapidly changing. Here, accompanied by a young girl intrigued by his skills, his formerly modest and minimalist lifestyle is given an awakening by Alice's material curiosity. Wishing to keep her happy and maintain his generosity, he rewards her housework and cooking with lavish gifts, including a coat and a pair of shoes, but as a result struggles to make ends meet.
I found the film to lag a little in the middle third, and where the film ultimately succeeds or fails for viewers, is the nostalgic appreciation for Tati's work. Viewers with no knowledge of Tati will no doubt find this film somewhat dull (despite it's beauty) because there isn't a lot that happens. I too thought it got a little bogged down, a little repetitious, and I lost interest briefly when he was trying unsuccessfully to earn some money through an alternate means. This is a film that, above all, makes you feel good about the life you lead and as a result I was greatly moved by the conclusion. While I'llusionniste will no doubt have a short run in Sydney cinemas, it is well worth a look. Few animated features possess such magic.