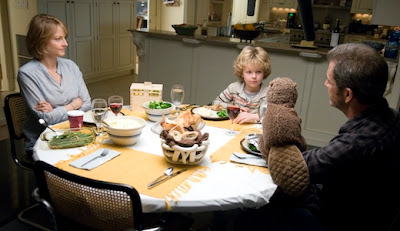 There are four new releases hitting cinemas today. They are Rise of the Planet of the Apes, The Beaver, Love Crime and Red Dog. I have already seen The Beaver, but my enthusiasm to see the other three is non-existent. Luckily there are some great films to see in Melbourne this weekend!


Rise of the Planet of the Apes - A single act of both compassion and arrogance leads to a war unlike any other - and to the Rise of the Planet of the Apes. The Oscar-winning visual effects team that brought to life the worlds of Avatar and Lord of the Rings is breaking new ground, creating a CGI ape that delivers a dramatic performance of unprecedented emotion and intelligence, and epic battles on which rest the upended destinies of man and primate. So, we discover the origins of the world first portrayed back in Planet of the Apes (1968), a science-fiction classic with one of the greatest twist endings in cinema history. Amongst the cast of Rise are James Franco, Freida Pinto, John Lithgow and Andy Serkis. Early reviews have been strong.

The Beaver - Jodie Foster directs and co-stars with Mel Gibson in The Beaver - an emotional story about a man on a journey to re-discover his family and re-start his life. Plagued by his own demons, Walter Black was once a successful toy executive and family man who now suffers from depression. No matter what he tries, Walter can't seem to get himself back on track..until a beaver hand puppet enters his life. I saw this at the SFF and while I admired the bold attempt to examine mental illness in a refreshing way, the shallow premise is barely acceptable, and Gibson (who admittedly gives a strong performance) hugely overshadows the rest of the cast, who exist as nothing more than stereotypes. The strong responses to this film (yes, Richard Roeper) sure are puzzling. Check out my review here.


Love Crime - Within the sterile offices of a powerful multinational corporation, two women come to a face-off. Isabelle is a young executive under orders of Christine, a powerful woman who she absolutely idolises. Confident of her control over Isabelle, Christine leads her into a confusing, perverse game of seduction and domination. A dangerous game that goes too far - to the point of no return. Stars Ludivine Sagnier and Kristen Scott Thomas. I have heard it's not that great.


Red Dog - Based on the legendary true story of the Red Dog who united a disparate local community while roaming the Australian outback in search of his long lost master. Stars Josh Lucas, Keisha Castle-Hughes, Luke Ford, Rachael Taylor and Noah Taylor. Well, David Stratton gave it 4 1/2 stars so it must be good.

Weekly Recommendation: Well, not The Beaver that's for sure. Rise of the Planet of the Apes should be solid popcorn entertainment, while Red Dog should be harmless fun.
Posted by Andy Buckle at 12:41 AM