While Super Bad is as crude and vulgar as teen comedies come, there is also a surprisingly heartfelt sensitivity to the story and the film never loses sight (if it does become distracted at times) that it is a film about youth, co-dependent friendship, coming-of-age fears and the desperations that accompany the desire to conform and fit in. Oh yeah, it is also very funny. 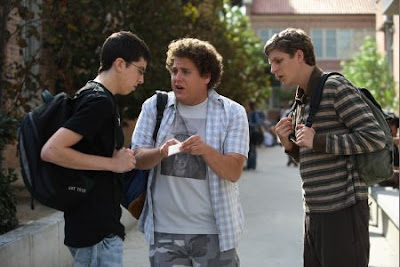 Directed by Greg Mottola (who recently directed Paul), the screenplay was written by Seth Rogen and Evan Goldberg, who have worked as frequent collaborators with Judd Apatow on a number of projects, including The 40-Year Old Virgin, Knocked Up and Pineapple Express. It is reported that Rogen and Goldberg had begun working on the screenplay when they were thirteen years old and had completed a draft by the time they were fifteen. This explains why they were able to really get the juvenile dialogue, the late high school atmosphere, and the adolescent insecurities spot on. They were living through it. Bizarrely, the events could also be inspired by personal experiences. The central characters do share their first names. But I sense there will be more than just the co-writers who can relate to the zany events depicted here.

It opens on the morning of a regular school day with Seth (Jonah Hill) picking up his long-time best friend Evan (Michael Cera) and driving him to school. It soon becomes evident that Evan is a bright, warm-hearted kid with crippling nerves, low self-esteem and an affinity to worry about everything, while Seth is a loud, crass, hormone-driven mischief-maker who thinks he is tougher than he is and who has frequently held Evan back from reaching his potential. But, they have been inseparable since they were eight. It is just two weeks before their high school graduation and both are experiencing anxiety about heading off to different colleges, Evan to Dartmouth and Seth to a state college, with fears of fitting in without the aid of one another. When their mutual friend Fogell (Christopher Mintz-Plasse) reveals his plans to acquire a fake ID, Seth sees it as a way to get the pair off the geek list and end the losing streak with their longtime crushes, the centre of their ailing self-esteems. 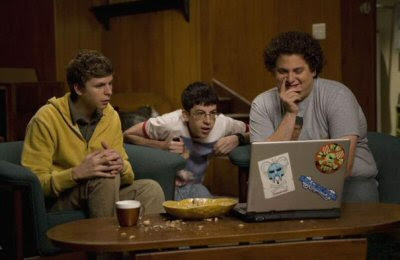 Planning to take advantage of the dopey Fogell, Seth agrees to buy the alcohol for the party that his crush, Jules (Emma Stone), is hosting that night. Evan, too, approaches his longtime crush, Becca (Martha MacIsaac), and offers to buy her vodka. While awkwardly purchasing the alcohol Fogell is assaulted by a hooded robber. Two dimwitted police officers, Michaels (Seth Rogen) and Slater (Bill Hader), soon arrive to question the youth, buying his fake ID (which has the single name “McLovin” as his identity) and offering to drive him to the party. As expected, it is not smooth sailing for Fogel, as the inept officers make numerous stops along the way, displaying increasingly inappropriate use of their police powers (including drinking on the job, speeding through traffic lights and discharging their firearms) but end up bonding with the hapless youngster. Seth and Evan, believing Fogel to have been arrested for the intended purchase, decide to salvage the alcohol they need in another way - leading to several wild adventures at an adult party and the procuring of alcohol in laundry detergent bottles, before the by-chance rendezvous with Fogel (still with the purchased alcohol) and their long-awaited, and welcomed, arrival at Jules' party.
What I really liked about this film is that it takes place entirely during a 24-hour period, with the events becoming excessively more ridiculous. But never do we question the decisions of the kids. They are so well constructed in the early sequences that every action they take feels genuinely realistic. The script, while taking a lengthy, roundabout route, does tie all it's strands together quite well. The dialogue is unashamedly dirty. I mean, these guys know nothing about sex, other than what they have heard (or watched), so sophistication on the subject just wouldn't exist. But the dialogue is sharp, and it is delivered with such confidence by a truly astounding Jonah Hill, and with such reservation by the similarly excellent Michael Cera (at his awkward best). The film, boldly, goes to some extreme places too.

The crassness does not exist to cause a stir, though it likely did at the time. It is what the dirty words represent for these kids that is important here. They each have a deep yearning not only for their continued friendship, which we can assume will endure through their college lives, but also to experience the pleasures of youth that have so far eluded them. Faced with a confusing crossroads in their life, the adolescent frustrations of the boys begin to emerge, and their actions become increasingly desperate over the course of their tumultuous evening. 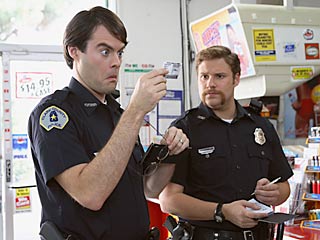 The film's key weakness, other than being too long, are the dimwitted cops pairing. They don't seem to fit into this film at all and have long overstayed their welcome before the end. While Rogen and Hader seem to have a lot of fun in their roles, and it seemed like most of it was improvised, some of their antics are so irresponsible that it undermines the maturity with which the child characters are addressed.

As I mentioned before, this is a highlight in both the careers of Cera and Hill, while Christopher Mintz-Plasse (who was cast for the role after auditioning out of high school) has never matched this performance either. His most notable one was an underwhelming performance in Kick Ass. He may be remembered solely for McLovin, but what a hilarious portrayal it was. Though it covers a subject similar to National Lampoons: Animal House and American Pie, Superbad is unique in it's own way. If you dismissed it back in 2007, where it was one of the year's funniest films, I urge you to give it another go.
Posted by Andy Buckle at 12:41 PM