From how I see it, Cowboys & Aliens was set to be disaster from the beginning. Blockbusters generally don’t get pushed into August unless they are a dud. Well, Apes was one exception to that rule this year, but in most cases they usually aren’t worth watching. Back when featurettes on the making of this film were being screened before Transformers: Dark of the Moon, it was evident that Paramount were desperate to convince people that in spite of the dumb title, and the silly premise, the film wasn’t going to suck. 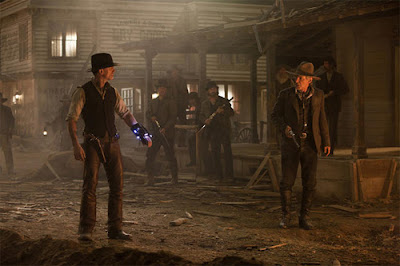 It was sad to see guys like Jon Favreau (Iron Man), Steven Spielberg and Ron Howard bumble over ways to justify being involved in this project. “Ah, well, if the Ancient Egyptians declared having contact with extraterrestrial life, perhaps the early inhabitants of the frontier did too.” The meshing of two completely opposing genres could have been transformed into some fun, and having enlisted a strong cast of charismatic actors, a solid action film might have been salvaged. But there is no fun. There are abhorrent plot developments at every turn, and some pretty lousy visual effects too. Oh, and it took five screenwriters to come up with it. Yikes.

The film opens with an unnamed loner (Daniel Craig) waking up in the middle of the desert, with no memory of who he is, how he got there, or why there is a strange metal bracelet shackled to his wrist. After taking down a couple of guys who approach him and figure he’s worth something, it is evident he has skills as a gunslinger. He wanders into a small town called Absolution and meets the local preacher, Meacham (Clancy Brown), who treats a mysterious wound on his torso. He has a run-in with Percy Dolarhyde (Paul Dano), the son of a rich and influential cattleman, Colonel Woodrow Dolarhyde (Harrison Ford), who rules over the town by casting a shadow of fear. Sheriff Taggart (Keith Carradine), intrigued by the stranger who stood up to and subdued the mischievous youth, recognizes him as Jake Lonergan, a wanted outlaw who we later discover stole some of Dolarhyde’s gold at some point with his old gang.
Soon enough, as Dolarhyde and Lonergan stand off, an Alien spaceship starts attacking the town. For such a small town there sure are a lot of explosions. But Percy, Taggart, the wife of the local saloon owner, Doc (Sam Rockwell) and several other townsfolk are abducted before Lonergan shoots down one of the ships with a device concealed in his wrist band. The attack ends and Dolarhyde proposes that a posse track one of the escaped Aliens at ‘first light’. Of course, every man (and his dog) comes along for the ride. Doc and Meacham join the party, as well as Taggart’s grandson and a mysterious woman, Ella Swanson (Olivia Wilde). 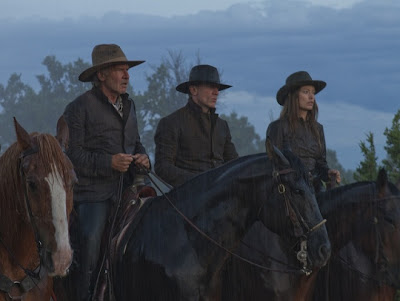 Throughout the course of the journey, the group seeks shelter within a bizarrely prevalent upside down ship, where they experience another Alien attack and lose half of the group. But don’t worry, it was everyone who didn’t matter. They also have run-ins with Jake’s former gang and a tribe of Chircahua Apaches, who hold them captive before working out their differences. Ultimately everyone forms an allegiance and focuses their forces on their extraterrestrial tormentors (who we discover are trying to remove gold deposits from Earth) in an attempt to take down their grounded mothership. Along the way, Jake’s memory begins to come back to him, enhanced when it was needed by a dose of Mescaline offered by the Apaches.
To put it bluntly, the story is convoluted, lacks cohesion and is almost void of continuity. The glaring holes are filled by blunt exposition and instances of ridiculous convenience. Nothing in this film made any sense at all. I tried not to think too much about what I was watching, but the mediocrity was so glaringly obvious. While the aim was to combine the Western and Sci-fi genres, the film consists of nothing but a checklist of predictable clichés and plot points for not just one genre, but two. It never claims to be self-aware or in any way utilises these clichés in an inventive or fun way.

Olivia Wide existed for no other purpose than to have a sexy female love interest in the story and to provide exposition (an explanation more like it) about the extraterrestrial invaders. Adam Beach, playing the Native Indian of the posse, is the tracker. He is tracking rather large prints. I sure was glad he was around to utilize his unique skills. But why is it that Daniel Craig happens to have the mechanism that is key to the Alien’s destruction attached to his arm? It morphs into whatever is required at convenient times. Further, why did the Aliens even possess a device that when utilised could cause their complete destruction? 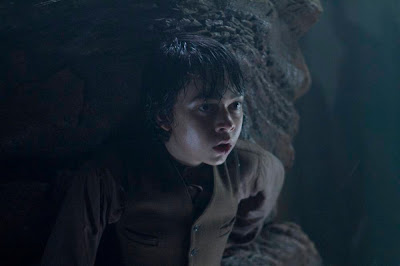 It’s hard to be too tough on the performances, because none of them had any characters of interest to work with. Daniel Craig does his best to turn this awful screenplay into something worth watching, but even his often-imposing presence can’t save this one. I’m sure there were countless occasions when he thought: Really? You want me to do that? Harrison Ford plays another grumpy old guy whose sharp turn from the baddest of bad guys into a willing sidekick (who does very little) is nothing short of ridiculous. I really miss the Han Solo and Indy days. Sam Rockwell just looked bored, while Olivia Wilde, though hot, was a blank slate. Easily one of the worst performances this year is delivered by a ludicrously over-the-top Paul Dano. I hope he played it like that for laughs. On that topic, I don’t think I laughed a single time. The film played it straight for the most part, which I found to be a serious problem.
There are no surprises at any point in this film, and while it is sorely lacking in suspense - none of the climactic battle sequences with the Aliens (which felt like they went on forever) have any shred of excitement - there was some unwelcome brutality at times too. A feature of action sequences that I have grown to despise is the characters rejoicing a single take-down. We see countless Aliens attack from the mothership and the situation does become quite intense for a while. There is plenty of what looks suspiciously like rehashed footage of Aliens (who are quite savage, soulless beasts) taking down the humans, but yet they still find time to rejoice in the heat of battle and Ford and Beach's characters even share that tender moment we knew was coming. Another bizarre situation is when they all seem to rendezvous just outside the battle region (and there is no reason why the battle would have stopped, mind you) and then ride into battle again...where the Aliens are waiting for them. It's absurd.
I could go on, because there were so many more things that bugged me about this film. Blending these genres together was never a good idea, and it is nothing short of a miserable failure. It tried to be a Western, and then it tried to be a Sci-fi, and ended up in no-mans land. I feel sorry for the esteemed actors in this film (Daniel Craig, Sam Rockwell etc.) and while I would normally feel a little sorry for giving such a negative review, with guys like Favreau and Spielberg involved I feel no displeasure in saying that this film sucks.