Rhoda Williams (Brit Marling), a bright young woman recently accepted to MIT’s astrophysics program, is driving back from a party when she notices a mysterious planet on the horizon. Leaning out of her window for a better look, she hits a sedan and kills two members of the family in it. The lone survivor is a college lecturer and composer, John Burroughs (William Mapother), who has just reached the pinnacle of his profession and is about to have a second child with his wife. On the eve of the discovery of a mirror planet of Earth (Earth2, the one Rhoda glimpsed), the lives of these strangers become intertwined, seemingly by chance. 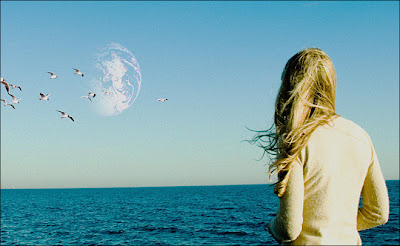 As a result of her negligence, Rhoda is imprisoned for four years, while John enters a coma. They return to the world estranged from the lives they once knew and with their future dreams destroyed. It is discovered (and revealed via television coverage) that the mirror planet, quite incredibly, has human duplicates of everyone on Earth too. An essay contest is held where the winner can ride a spacecraft to visit it. As the planet gradually moves closer to Earth, Rhoda considers the possibility of visiting it to find out what kind of life her mirror self would have led, and enters the contest.

Meanwhile, she begins to develop an unlikely, but increasingly intimate relationship with John (initially turning up to his house posing as a cleaner offering a free trial) without revealing her true identity to him. When Rhoda is presented the chance to travel to the other Earth, she realizes there is a way she can redeem herself and make things right. What if their worlds hadn’t collided on the other Earth? What if John’s wife and child are still alive? Perhaps he could see them one last time. 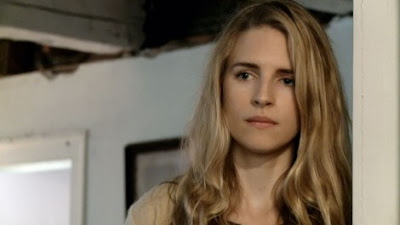 Though an inspired and ambitious debut feature from writer/director Mike Cahill (though Brit Marling co-wrote the screenplay) and making good use of a minuscule budget, Another Earth is a slow-burner that often feels monotonous, it features very few surprises and is not particularly engaging. I thought it started out really well (with a horrific crash sequence), and there are some strong scenes littered throughout, but when I realised that the film had decided to focus more on the romance between the two leads than the intriguing questions raised by the 'mirrored Earth' premise, I did lose interest. Some of the dialogue was awful and I thought the photography was inconsistent. Some scenes were beautifully shot (the ones of Rhoda walking with Earth2 visible in the sky above her), while others came across as amateurish (with clunky zooms, soft focus and awkward framing). It seemed to be trying a little to hard to be alternative and indie, but for me, the photography came across as irritating on many occasions.
Another Earth raises some interesting and ponderous questions, but doesn't probe into them as much as I hoped/expected, choosing to explain very little about the existence of Earth2, but more about the possibilities that arise with its existence. How did it get there? How could it have moved so close to Earth? Would the lives of our duplicates be better or worse than ours? Why did the representative of the company running the contest speak with an Australian accent? The latter I just found to be odd, but the other questions are merely brushed over, with the romance and Rhoda's quest for redemption the primary focus. 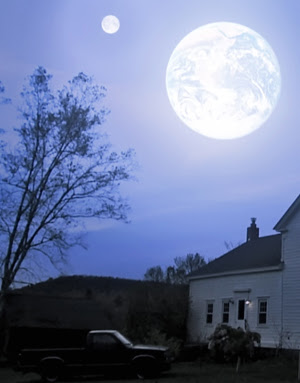 Rhoda has to struggle with being dealt bad luck, because there are multiple ways a life can take - "You can be a millionaire or you could go to prison" is a line that pops up somewhere in the film, and I think it is appropriate. Tackling the likelihood of a doppelganger existing in the universe, similar to Kiselsowski's The Double Life of Veronique, it becomes possible that Rhoda's other self is rich and successful and that John's family is alive and happy. The film concludes with a delightful sense of hope. While each of the events in the film were destined to happen, the screenplay does make some good choices about when they happen, which heighten the emotional impact of these moments.
While the performances from both leads are strong (especially Marling), the unlikely romance is exactly that...unlikely. I didn't really buy that this man was once a college lecturer and composer, and though he lay in a coma for a lengthy period of time, the contrast between his character at the start of the film and the end, is a bit of a stretch. The age difference between the pair is another feature that undermines the plausibility. One of the most effective mysteries was whether Rhoda was romantically intimate purely to please John and make herself feel better, or was there a genuine connection brewing? She didn't know herself, which results in quite a powerful moment. The fact that Rhoda was present in his life (as company) enabled them both to heal in their own ways. Thinking about it now, there was some genuinely moving parts to this film, but it took a direction I was disappointed by and I found it too slow and too aggravating to watch (visually) to recommend.
My Rating: 2 1/2 Stars (C)
Posted by Andy Buckle at 4:12 PM