Cronos, the feature debut of Mexican director Guillermo Del Toro, opens with a prologue set in the year 1535, explaining that there was a Spanish alchemist who developed a mechanism that could give eternal life. Centuries later, an old building collapsed, and a body was discovered - an old man with grey skin and a stake through his heart. It was the alchemist. It was never revealed what else was discovered in the building, but we witness a hanging body and several buckets of blood, and no mention of 'Cronos', the mechanism. 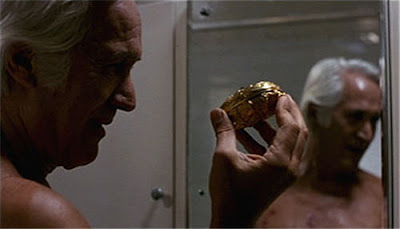 Jumping to the present era, the store of an elderly antique dealer named Jesus Gris (Federic Luppi) is visited by a customer who suspiciously expresses interest in an ancient statue of an archangel. Intrigued, Jesus and his sweet granddaughter, Aurora (Tamara Shanath), remove the base of the statue and discover an ornate, golden, scarab-shaped device, which can be wound mechanically. Holding the device in his hand, it sprouts razor-sharp spider-like legs and grips his hand tightly, inserts a needle into his skin and injects a serum into him. While initially shocked at the experience and feeling ill, he knows he has discovers something incredible and soon discovers that his youth and vigor are returning. He loses his wrinkles, his hair thickens and he suddenly becomes sensitive to light.

Most shocking of all, is his sudden urge to taste blood. Jesus, transforming into what is essentially a vampire, has become the reluctant possessor of the Cronos. Just as he is forced to give into his temptations (including a particularly fantastic sequence at an awards function) and become reliant on the solution injected by the mechanism (which is actually produced by an insect inside the Cronos) he must repel the attempts of Angel (Ron Perlman), a brutish thug trying to steal the Cronos for his rich, dying uncle, Dieter De La Guardia (Claudio Brook). He has been amassing information about the mechanism, coming into possession of the alchemist’s journal and tracing it to the statue. His nephew has been scouring the world for it ever since – but even they underestimate the power of the new bearer. 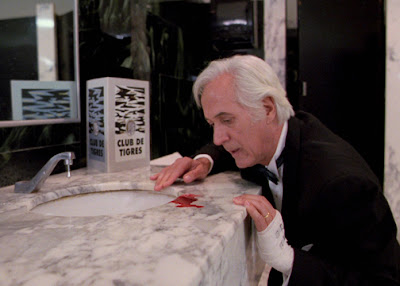 For Guillermo Del Toro (The Devil’s Backbone, Hellboy and Pan’s Labyrinth), who was only 28 years old at the time, this is a surprisingly assured debut. His keen interest in fairytales and dark supernatural themes and his now distinctive visual style, which would be perfected in his later films with the aid of bigger budgets, is apparent even here. His inventive work with cinematographer Guillermo Navarro produces some remarkable shots, while the film builds a great atmosphere and is consistently tense and ominous. There are some very well crafted scenes, especially one where a ‘thirsty’ Gris follows a man with a nosebleed into a bathroom and another where Gris’ believed-to-be-dead body is given the stapler treatment by a cocky embalmer and later disappears from the casket. The make-up effects in the latter half are groundbreaking too.
While this film is stylistically an impressive feat, and quite an original twist on the vampire genre, I felt like the simple and generic plotting, the relatively shallow characterisations (considering there are only four key characters) and the hammy performances from the villains let the film down a little. These are all forgivable, especially Ron Perlman, whose cheeky, ruthless thug of a character benefitted from his outrageous over-the-top antics. He spent most of the film in pursuit of Gris and complaining in anguish about his situation - "not my nose again". He adds a welcome comic aspect to the film. The relationship between Gris and Aurora is moving though. It was impossible not to feel emotion when Gris turns up on her doorstep having escaped his own cremation, to be welcomed by a towel and a bed amongst her toys. She continues to love her grandfather dearly and take care of him, despite his now gruesome appearance, even accompanying him to his final confrontation with De La Guardia. 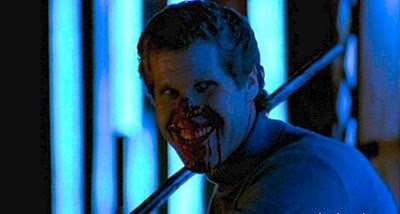 What adds another layer to this film is the fact that the powers of everlasting life have been thrust on an unsuspecting and reluctant victim; an everyday, kind-hearted man forced to harness these supernatural powers. His new-found desire for youth, and desperation to protect his family from Angel, fuel his actions. He is man who is content with the life he has lived and isn't afraid to die when his time is up. But he is a man who values his life and has plenty to live for.
The greedy De La Guardia, who would usually harnesses such powers, has been stripped of his quality of life and is holed up in a quarantine-like chamber, being tended to by his nephew who wants nothing more than the old man to die to claim his entitled inheritance. Angel even scoffs at the thought of his uncle living for eternity: "Fucker does nothing but piss and shit all day, and he wants to live longer? What makes Gris' character tragic, is that while he will always possess everlasting love for his family, his lifestyle has been forever altered by the violent turn of events. Thankfully, the closing shot gives the viewer some hope. This is a genuine classic from Del Toro, an award winner at the Cannes Critics Week in 1993 and now restored on Criterion. Check it out.
Posted by Andy Buckle at 12:16 PM