It’s always great going into a film knowing very little. After hearing some buzz about Tucker and Dale Vs. Evil around Sydney Film Festival time, and having been recommended it on a couple of occasions, I felt I couldn’t waste a limited release opportunity. I was not disappointed. As bloody good fun, this frequently hilarious, self-aware subversion of typical horror tropes and conventions marks the debut of writer/director Eli Craig. 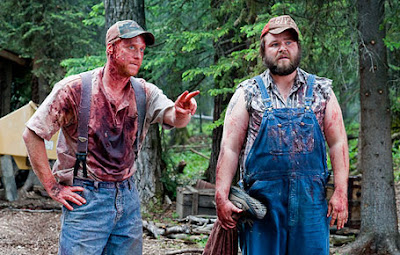 The film opens on a bunch of rowdy college kids from West Virginia embarking on a camping road trip into the backwoods of the Deep South. At a roadside convenience store, they stumble across a pair of bumbling, but well-meaning rednecks, Tucker and Dale (Alan Tudyk and Tyler Labine), who are headed to their newly purchased lake-front vacation cabin with the intentions of making it over and doing a little fishing. The college kids, who choose the same area of the forest to camp, soon disrupt their peace.

When one of the girls, Alison (Katrina Bowden, 30 Rock) falls into the lake, following a smitten Dale startling her, and hits her head, they take her back to their cabin and tend to her. The frenzied college kids, who have been spooked by the story of a prior massacre in the woods by frat boy, Chad (Jesse Moss), assume the worst; that she has been kidnapped by the creepy rednecks that have followed them there. 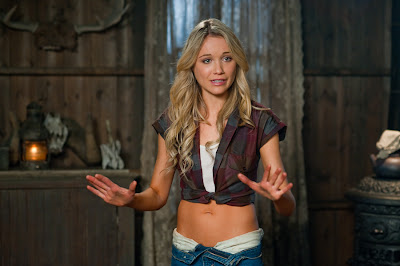 In their attempts to rescue Alison (safe and sound and bonding with Dale over board games), the dimwitted rescue party (who have seen too many horror films) transforms innocent situations involving the oblivious duo into typical horror tropes, and assume the pair to be, well, evil. Several bizarre misunderstandings and accidents result in gruesome deaths for the kids.
Tucker and Dale can only watch in horror and befuddlement as they become pitted against their revenge-driven antagonists and their own unfortunate stereotype. In amusing latter events, when Alison tries to reason with her friends, they figure she has Stockholm Syndrome, while Chad, the primary instigator of this ‘attack-before-we-are-attacked’ scheme, comes to believe that Alison has fallen in love with Dale.
The film starts out smartly ominous, indulging in a few jump scares and initially presenting the pair as shady, untrustworthy and potentially dangerous. But in hilariously self-aware nature, the traditional views of heroes and villains in horror films are later subverted and genre clichés and conventions of all kinds are embraced and celebrated. Eli Craig makes great use of a wood chipper (think of Fargo) and a chainsaw in scene where Tudyk flees from a swarm of bees wielding one (in true Leatherface fashion). 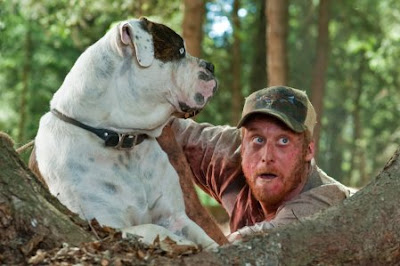 Tyler Labine and Alan Tudyk share great comedic chemistry and seem to eat these roles for breakfast. Not all of their dialogued jokes hit the mark but most of the zany situations they encounter effectively draw laughter. The college kids were only required to adopt stereotypes and were exaggerated to the extreme. With the most screen time, the sexy Bowden was fairly awful, however. As for the gore, many of the deaths take place out of frame, with the characters often sprayed with blood. Technically, Tucker and Dale wasn’t particularly impressive and the somewhat contrived third-act went to places that seemed ridiculous, even for a flick of this nature.
But overall, this is a rib-tickling delight that will appease both fans of horror and those looking for an unashamedly B-grade comedy satire. It’s effective in giving chills too, because we see the gory bits coming from a mile off. It’s no Shaun of the Dead, but still a rollicking good time.