Bosses regularly get a bad rep. It takes a certain type of person to be a good boss, and anyone who has worked under a boss before knows that they come in varying degrees of temperament and attitude. Some are respectable and easy-going; some are strict but fair, while others can be crude, inappropriate and torturous. Horrible Bosses stars three friends, Jason Bateman (Arrested Development), Jason Sudeikis (Hall Pass) and Charlie Day (It’s Always Sunny in Philadelphia) who have experienced about as much of the latter as they can cope with, plotting to off their bosses and return some happiness to their daily lives. 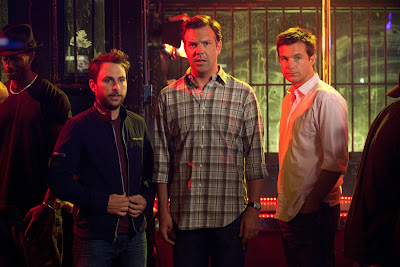 This raunchy, foul-mouthed black comedy is directed by Seth Gordon (who peculiarly has directed both The King of Kong: A Fistful of Quarters and Four Christmases) and written by a team made up of Michael Markowitz, John Francis Daley and Jonathan Goldstein. Though infrequently hilarious and endowed with hyperactive energy, it’s a bit of a mess.

The early sequences, which are statically constructed and feature pretty generic introductions to the characters, reveal the horrific circumstances Nick (Bateman), Dale (Day) and Kurt (Sudeikis) face at work each day. Nick has worked at a financial firm for eight years, and having been dangled a promotion opportunity by his emotionally abusive and ‘complete asshole’ boss David Harken (Kevin Spacey), works copious amounts of overtime (including 6am starts) to impress him. He is later denied the promotion, which is absorbed by Harken.

Dale suffers from humiliating sexual harassment from his boss Dr. Julia Harris (Jennifer Anniston) whose threats to tell his fiancé that they slept together (unless he actually does) pushes him over the edge. The idea to eliminate their bosses is raised by their friend Kurt (Sudeikis), whose previously enjoyable place of work has turned into a living hell after his close friend Jack Pellitt (Donald Sutherland) is succeeded by his cocaine-addicted son, Bobby (Colin Farrell). 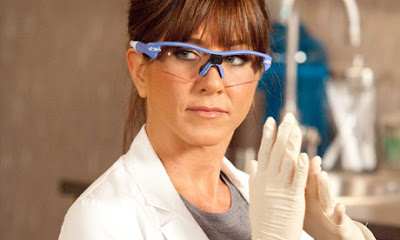 Having agreed that there is no alternative, their mission to hire a hit man overcomes a couple of near-disastrous hurdles and their reconnaissance begins with several stake-outs and break-ins to the homes of their respective bosses. Following the advice of an ex-felon, Motherfucker Jones (I know!) played by Jamie Fox (in an amusing but slightly long-winded cameo), the trio decide to take down their tormenters 'Strangers on a Train-style' - a different one each.

Amidst the uneven, but playful tale of resentment and amoral revenge, there are several hilarious sequences, notably a bumbling mishandling of a huge stash of cocaine and a cringe-worthy scene with an intoxicated Day wielding an EpiPen. But the screenplay soon spirals wildly out of control. Intriguingly, it's not dissimilar to the structure of Hall Pass (also starring Sudeikis), even to the point of resulting in a climactic car chase sequence. Of course, plot conveniences and a whopping deus-ex-machina pop in to topple the fate of our previously ill-fated protagonists in the right direction.
Despite all this, and what is important above all else, is that this film is very funny. But, I had expected it to be a little bit smarter. The genuinely amusing premise becomes increasingly more ridiculous and desperate in the latter half, trying to outdo itself when it would have benefitted from some subtlety. It is also contrived beyond belief, which doesn't benefit the film in any way. The unoriginality - George tries to poison his boss in a classic early episode of Seinfeld - is given a lift by the performances. Bateman and Sudeikis (whose banter timing is spot on) and Day (a loony standout and a bonafide comedy star) are all perfectly cast in their roles and are a joy to follow throughout the film.
Disappointingly, it is their bosses, and especially Anniston and Farrell, who exist as little more than caricatures. Sure, we have all met our share of horrendous 'superiors', but these people simply don't exist. While most of us have bosses, it’s pretty hard to relate to experiencing a dentist who tries to force you into having sex with her on a patient; nor one that has a cocaine party with prostitutes in his office. They each seem to be having fun with their roles, and Spacey's early sequences are cold, calculated and witty. Horrible Bosses is not without a few surprises, and the tempo is maintained by the hyperactive chemistry between the leads, who each have their moments to shine, but are utilised equally and to their strengths. 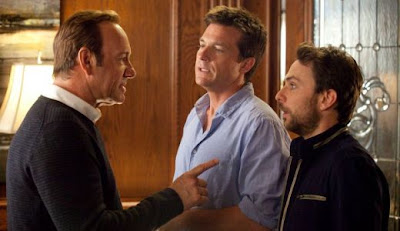 I did feel sorry for Wendell Pierce, who plays homicide detective Bunk Mooreland in The Wire. This really wasn't his element. If you overlook the silliness, like why Sudeikis' character was such a ladies-man, and what purpose naming Fox's character Motherfucker Jones served, there is plenty to like. In short, Horrible Bosses is sporadically hilarious, but poorly conceived, unoriginal material that becomes increasingly nasty, contrived and loony as it progresses. The saving grace is the key cast whose hyperactive energy ensures there is never a dull moment. This unashamedly vulgar lowbrow comedy is worth a look in cinemas if you are a fan of the cast but it doesn’t get close to the level of popular classics like Forgetting Sarah Marshall or The Hangover or from 2011, the much smarter comedies, Win Win, The Guard or The Trip.
My Rating: 3 Stars (C)
Posted by Andy Buckle at 12:08 AM