POM Wonderful Presents: The Greatest Movie Ever Sold, the amusing new film from controversial documentary filmmaker, Morgan Spurlock (Super Size Me and Where in the World is Osama Bin Laden), exists somewhere between an indictment and an endorsement of the now-ridiculous extremes of product placement, branding and advertising we find popping up in film and television. It opened the 2011 Hot Docs Canadian International Documentary Festival, and documents Spurlock’s bold attempts to pitch his ideas to major corporations in an attempt to convince them to fund his documentary by allowing their products to appear during the course of the film, which is comprised predominantly of this very same process. 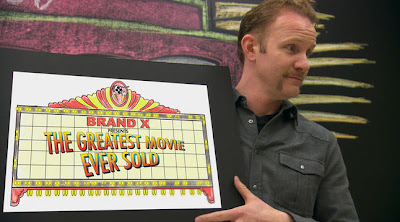 His challenge, really, is to convince them, because, seriously, why would the CEO’s want to advertise their products in a film that makes fun of such endorsements? Well, he manages to secure twelve companies, headlined by the titular POM Wonderful, to cover the 1.5 Million dollar funding of his film. Most of this money is utilized in the latter half to promote the film, because he actually starts out without the involvement of these companies, who join him along the way.

The contracts he forges cause some problems, such as the necessity of blurring out all other beverages and drinking only POM on camera. The ideas for a short advertisement he proposes to throw in during the film are all turned down and he instead finds himself having to criticize their competition. He drives around in a Mini plastered with the twelve brands, has to conduct interviews in Sheetz Diners and On JetBlue Airlines and come up with new and inventive ways to squeeze in the products that have agreed to endorse him. His motivation: “if blockbusters like Iron Man can do it, so can I.”
Spurlock enlists the advice of marketing professionals like Donald Trump and promotional experts to aid his project. The latter throw around ideas for his marketing campaign, including coming up with an ideal poster, the perfect trailer (by way of brain-interpretive technology) and an array of supporting promotional material and merchandise. He also chats with filmmakers like Quentin Tarantino, J.J Abrams and Brett Ratner about if and how advertising and the product placement from studio sponsors impedes on their artistic vision, and musicians like Big Boi (from Outkast) about how willing they are to supply samples of their music for advertising.
While it isn’t exactly the most informative documentary, existing more as a gimmick, it is a lot of fun - the primary intention of the film. Spurlock’s self-proclaimed challenge is a personal one and any further agenda would have just brought him more controversy and eliminated the sense of fun. It’s hard not to laugh out loud as he sits in a park (and sips on his POM juice) chatting to a guy who is oblivious to the importance of POM in this instance and is openly declaring that he despises blatant product placement. Spurlock becomes increasingly uncertain about whether he has turned into a sell-out. He claims he is “buying in” but takes his plight to the streets, asking American citizens how they judge his undertaking. 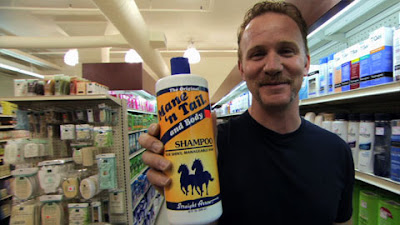 Spurlock is a charismatic and interesting guy and, honestly, a joy to watch. He is completely aware of the absurdity of his proposals and just as surprised as we are by the ease he is able to persuade CEO’s to sponsor his film. At times we aren’t sure whether Spurlock is actually “blowing sunshine up their ass” as many speculate and proclaim, but he goes about his pitches with a wicked grin and a sense of glee.
Spurlock does enlighten viewers with a surprising amount, and while we all recognize that “advertising is everywhere” and that it frequently borders on the ridiculous, the inner politics of the business and the work it takes to secure funding (and the potential contractual restrictions that follow) aren’t readily known to non-industry professionals. In this sense it is a genuine eye-opener. We can’t sneer at Spurlock’s bold ambition, nor suggest that the film isn’t often-hilarious, and this makes it well worth a look in my book.
My Rating: 3 1/2 Stars (B-)
Posted by Andy Buckle at 7:23 PM