First of all, I'd like to thank everyone who visited the site and commented over the weekend. Apologies for the delayed responses. All I had was my phone for the entirety of the weekend so commenting back was difficult. I also feel very out-of-the-loop with everyone else's blogs, so I'll get around to catching up ASAP.

Here are the crazy antics I got up to in Melbourne for the Melbourne International Film Festival (MIFF):

It sure was an early start to the adventure. Following a smooth trip to Sydney Airport, we caught a 6.15am flight to Tullamarine Airport, Melbourne. We arrived in the city centre shortly after 8am courtesy of an efficient shuttle bus. My companions for this adventure were my two friends Thomas Jordan and Virginie Galvez. Like me, Thomas made the journey to watch the hotly anticipated films we had booked tickets for. Virginie, leaving the country next month, had never been to Melbourne and wanted to see the city before she left. With our first film of the day, Lars Von Trier's Melancholia, scheduled for 6.30pm, we had the entire day to check into our hotel (Rydges) and to explore the city.

Our first stop was a cafe called Cumulus, where we devoured a much-needed breakfast. Surprisingly, we were able to check into our hotel room at about 10am, which freed us of our cumbersome baggage. Our next stop was another cafe (yes, I drink a lot of coffee), which had been recommended by a friend of ours. It was a trendy little establishment which served up great coffee and had a roof adorned with chairs, which I thought was pretty cool. After a quick walk-through of the State Library, we then made our way out to Brunswick Street in Fitzroy. We spent most of the day there. Amongst the highlights were the chance spotting of Dylan Moran (and Virginie's accidental photograph of the man), the dirt-cheap DVD purchases of Notorious, The Killing and Dawn of the Dead, and the mussels and beer we ordered at the Little Creatures Brewery. 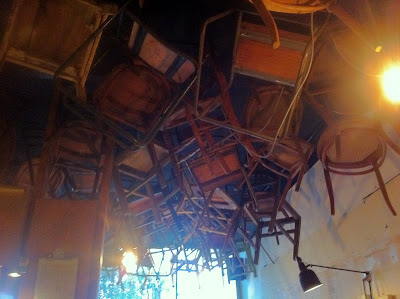 I then made my way back to the city centre to meet Mr. Tom Clift of Movie Reviews by Tom Clift. Tom was swiftly approaching 30 films for the festival and had been busy covering it for Cut Print Review. We spent a couple of hours hanging out and chatting about films before making our way back to Greater Union on Russell Street for Melancholia. In the cinema we were joined by Julian Buckeridge of At the Cinema, who I would bump into again the following night. I do like Lars Von Trier's films but I was pretty disappointed by Melancholia. Essentially, it tracks two sisters (Kirsten Dunst and Charlotte Gainsbourg) as they experience individual psychological traumas; the former from chronic depression and the latter from a crippling anxiety about the end of the world in the form of a planet called Melancholia that has emerged from behind the sun and started a collision course towards Earth. He sure is subtle. The first half is outstanding but it becomes incredibly tedious in the latter half and a challenge to remain interested. The closing shot is seared in my consciousness, though. Exiting the cinema we jumped in a massive line for Tiny Furniture, the debut film from writer/director and star, Lena Dunham. There we met another Melbourne film enthusiast, Estela Correa, and jumped half of the line. While Tiny Furniture was an honest, quirky and often-amusing indie flick, I found the story to be unnecessarily contrived and ultimately come to nothing. After a few drinks around the city we retired for the night.


Our first stop today was the ACMI (Australian Centre for the Moving Image), located in Federation Square. We wandered through the museum there, which chronicles the history of film, television and gaming in Australia with a wide range of memorabilia, informative videos and hands-on activities. It was very interesting. We then took a quick coffee break and headed to the Eureka Skydeck 88, which has incredible views of Melbourne from the observation deck of the highest public vantage point in the Southern Hemisphere. I got some great photos. I then rushed off to meet a couple of old work colleagues who moved to Melbourne a few years back. It was great to catch up with them. 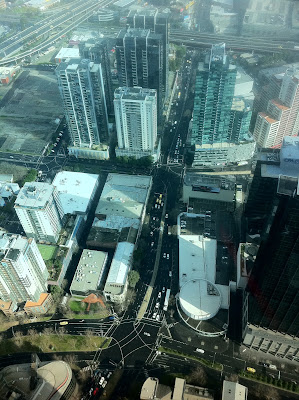 I met Thomas back at the hotel and we got organised for Drive and the 'Closing Night' party. While there were some strangely evident flaws to Drive I really enjoyed it overall. Nicholas Winding Refn has transformed a pulpy, uber-violent B-grade crime thriller premise into a slick, stylish revenge tale. It has the best opening sequence of the year, and the second half is littered with scenes that will make your jaw drop and your heart pound. It's a visceral experience like no other but Carey Mulligan, I hate to admit, was poorly cast. We then headed back to Federation Square for the 'After Party', meeting up with Nicole Paterson and Sarah Nathan, a couple of other Sydney film buffs who made the journey to MIFF. Many drinks were consumed, and a stumble back to the hotel ensued in the early hours of the morning. It was a great night!


This morning was a mess. After a hasty checkout we raced to ACMI for a screening of Martha Marcy May Marlene, a film I had already seen at SFF, but Thomas was desperate to see. We sat with Tom Clift again. This is a great film, and easily the best film I saw in Melbourne. It's a perplexing and thought-provoking psychological study, with a temporal ambiguity and a killer ending. With assured direction from Sean Durkin, striking wide lens cinematography and stellar performances from Elizabeth Olsen and John Hawkes, it could very well feature amongst Oscar consideration this year. 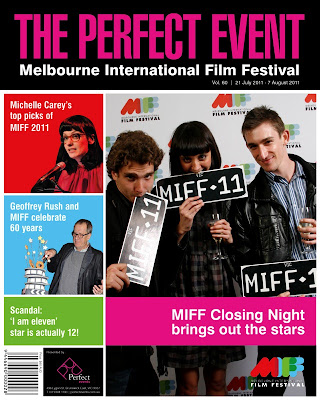 Exhausted and hungover, we filled the middle of the day with no purpose. Next, it was back to Greater Union for our final film, Another Earth, written/directed and photographed by Mike Cahill. While I thought it started out really well, when I realised that the film had decided to focus more on the romance between the two leads than the intriguing questions raised by the 'mirrored earth' premise, I did lose interest. Some of the dialogue was awful and I thought the photography was a mixed bag. Some scenes were beautifully shot, while others came across as amateurish (with clunky zooms and soft focus). Overall, it was slow, unsurprising and often-boring. From there we headed straight for the airport and back to Sydney. It was an awesome weekend. We squeezed in a lot on the Friday and didn't sleep a lot. As for the films, most of them were disappointing (even Drive because my expectations were sky high), but with the exception of Martha Marcy May Marlene, Drive was the standout of the first viewings. Reviews to come in the next two to three days.
Posted by Andy Buckle at 2:06 AM